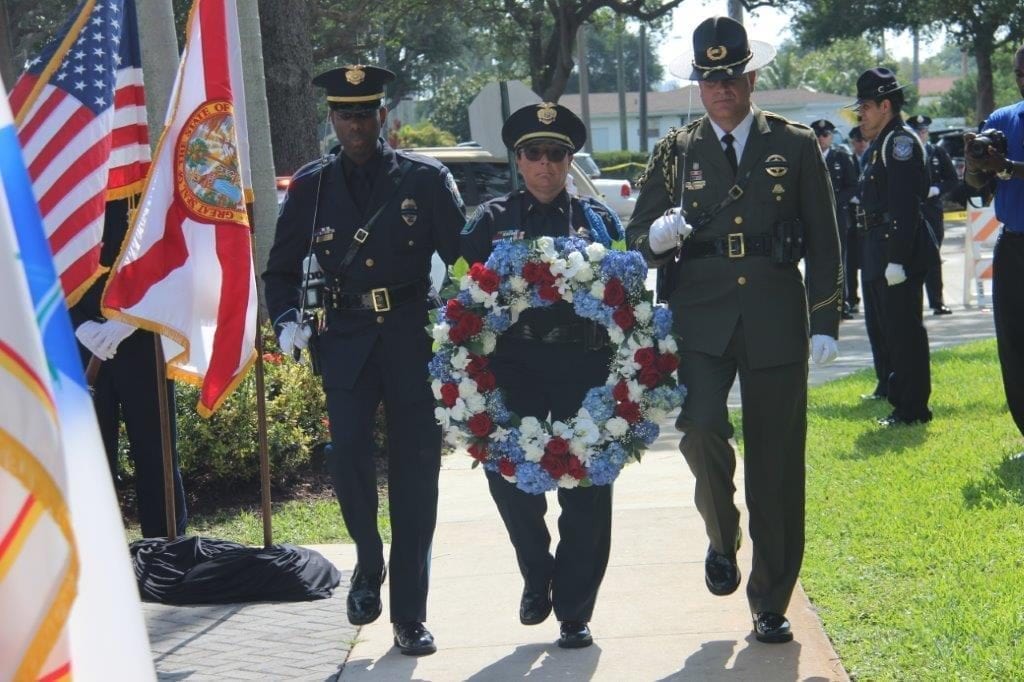 Members of the Hollywood law enforcement community and their families and friends came together in front of the Hollywood Police headquarters building to pay respect to fallen officers during a special ceremony.

The event included a gun volley salute, the playing of taps, a presentation of a wreath and the playing of bagpipes. The ceremony honored six police officers who died in the line of duty and one K9, a dog who also died in the line of duty. After speeches and the ceremony, families members of the fallen officers were given a rose and escorted by a member of the police department to the plaque where their love one is honored.

Hollywood Police Chief Tomas Sanchez spoke on the importance of honoring and respecting the men and women of law enforcement. “We are fighting a war against mental illness, substance abuse and domestic violence,” he said. Sanchez mentioned that a murder had been committed the previous night in Hollywood.

Sanchez said that police officers are working under more difficult conditions and that too many people are against the police. He said more officers were shot last year than in previous years throughout the nation and that more Hollywood officers were assaulted in the past year than in previous years. He described a recent arrest in Hollywood in which an individual was found in possession of a small arsenal of powerful weapons.

“It is very important that we honor those men and women who protect and serve the people,” Sanchez said.

“These are men and women who are sworn to protect us from evil. They have taken an oath to

protect people they don’t know. The job of being a police officer is very challenging and dangerous,”
Callari said.

Callari addressed the officers who were present, saying, “God bless you and your families and keep safe.”

Following the ceremony, the officers met members of the community and had the opportunity to socialize and spend time together.