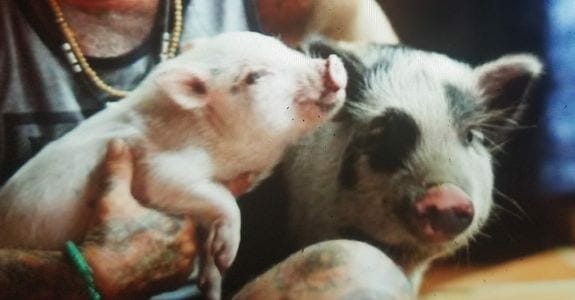 The owner of two miniature pet pigs in Pembroke Pines has started a Care2 petition to stop the city from enforcing a code violation that would force her to get rid of them or face a $250 daily fine. Her petition has gathered over 64,819 signatures towards her goal of 65,000.

The city gave Theresa Shaia until April 18 to get rid of her beloved pets, named Beetlejuice and Frankenstein, but she’s now fighting the violation in court. She told Care2 she will likely have a hearing in July.

The whole thing started when a neighbor claimed the pigs smelled and called in a complaint.

“The thing is, the city’s animal ordinance doesn’t state anything about pets which are prohibited,” Shaia told Care2. “There’s a “nuisance” ordinance that states “no farm animals,” so the city is claiming our home is zoned for residential use and not agriculture. My argument is that these are not farm animals, as we do not utilize them for anything except pleasure.”

Pembroke Pines law states that “chickens or other farm animals, and four or more dogs over the age of four months old” are prohibited (section 155.013).

Shaia and her partner, Michael Owens, started the Care2 petition to ask the city to change its ordinance to allow for miniature pigs, and to stop enforcing the potential code violation.

Shaia says she recently experienced the loss of a close friend, and that losing her pets would just add to the devastation.

“I appreciate all the help I can get so I don’t loose my little babies, too,” she said.