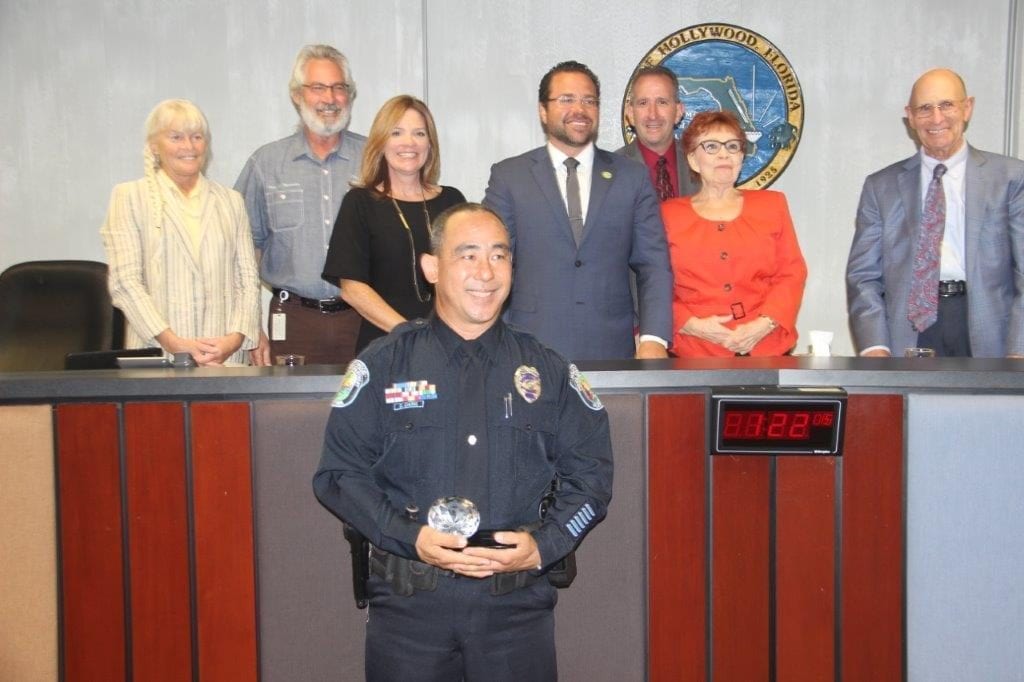 Hollywood Police Officer Dwayne Chung received a prestigious award from the City of Hollywood during a recent Commission meeting. He received the Diamond Service award, the highest award possible for a

Hollywood Police Officer received the Diamond Award for his service to the City. He has worked extensively to help homeless people.

city employee. This award is presented twice a year to a Hollywood employee who has gone above and beyond to provide the best service possible.

On the document recommending Chung, he was described as extremely self-motivated and one who regularly conducts himself in a professional manner that reflects well on the Hollywood Police Department. He has shown great compassion when encountering with people who are homeless or in desperate need of social services.

Chung has immersed himself in training opportunities that have broadened his knowledge directly pertaining to individuals in need. Some of these

courses relate to Crisis Intervention and becoming a Homeless Outreach Team Specialst. Chung also partners with the Broward Outreach Center and, on a regular basis, has found housing for individuals who otherwise would be homeless.

Chung has gone above and beyond his work duties by routinely working to assist these individuals and by seeking assistance pertaining to emergency lodging and food. Since the beginning of the Police Department’s Family Reunification Program, Officer Chung has worked to reunify over 30 individuals with family members who have agreed to assist in housing these subjects.

John Chidsey, the city’s Code Compliance Manager, said he was glad his team received the award and said the work his team does is often hard and thankless. He believes the work is very important because it contributes to safer buildings and homes in Hollywood. Chidsey wants to develop a home inspection program in Hollywood because he is concerned that too many landlords are not properly maintaining their property and buildings.

“There is a strong sense of camaraderie among members of the Code Compliance Division and I’m very proud of the work they are doing,” Chidsey said.