When your child chooses tradition: Bar & Bat Mitzvah prep programs for the unaffiliated 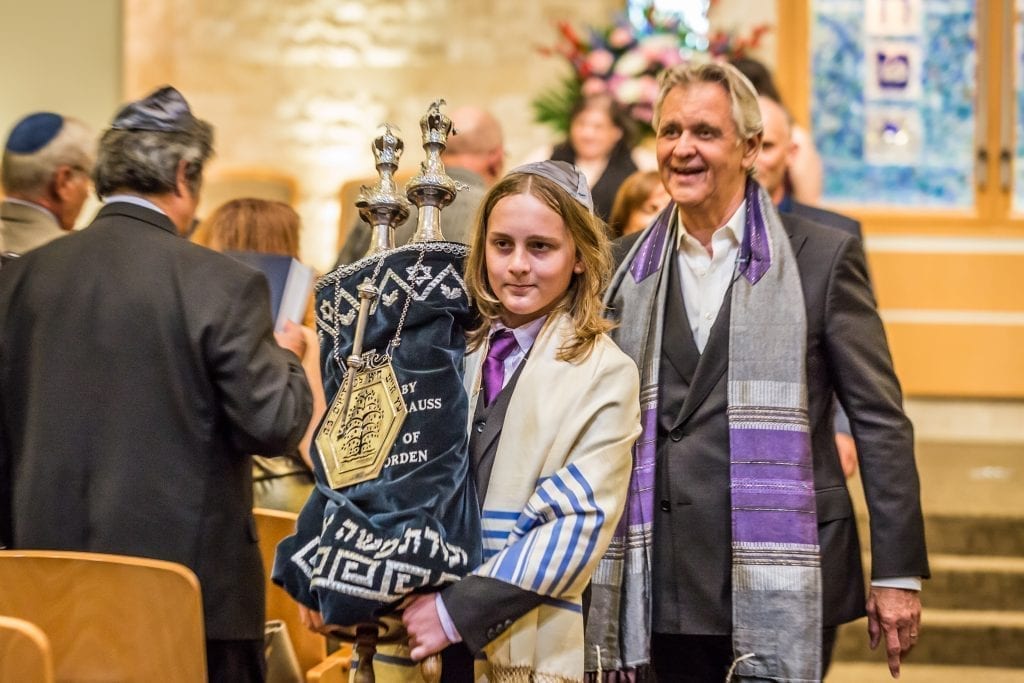 When Sherry and Christian Rauh first broached the topic of Bar Mitzvah with their son Julian, they were thinking out of the box.

The family they’ve built together could be considered decidedly unconventional by traditional Jewish standards. Sherry is Jewish but Christian is not. Julian, their son by birth, is Jewish because his mother is, but their eleven-year- old daughter whom they adopted from Kazakhstan at age two was recently given the choice to convert – or not – to Judaism.

The Rauhs encouraged Julian to approach the expression of this rite of passage with the same freedom and creativity with which they live their lives. They suggested taking a trip or doing something alternative yet meaningful. But Julian knew exactly what he wanted: a traditional Bar Mitzvah.

Preparing your child for this big day is a challenge for any family but for those who are not members of a temple, as the Rauhs can attest, it can loom near impossible.

They explored every obvious option but none felt right. “We never found a temple that was a good fit,” Sherry says, so they considered private Bar Mitzvah lessons. It was a viable possibility, she recalls, until she stumbled on the question, “How were we going to put all the pieces together?” In addition to preparing your child to read from the Torah, there were the logistics of the ceremony and a celebration. They concluded this option was not what they were looking for. And then just in the nick of time, the Accelerated Prep Program at Temple Beth El of Hollywood was.

The APP, an inclusive Bar and Bat Mitzvah program for unaffiliated Jews, “was an absolute perfect fit for what we needed,” effuses Sherry. “It gave Julian the opportunity to learn Hebrew in less than a year and have a traditional Bar Mitzvah.” Because the Rauhs live near Sawgrass, traveling to Temple Beth El in Hollywood would’ve proven extremely time consuming, especially after school in rush hour. But the APP allows for virtual study and Julian did most of his Bar Mitzvah training with the cantor via Skype. Says his proud mom, “I was skeptical the whole time but when he got up there and stood in front of the Torah and started reading …” At which point her words fall off and her obvious emotion kicks in. “It really exceeded our expectations in terms of the whole experience.”

For the Rauhs, the takeaway of their APP experience was more than a beautiful service and a great party. It was acceptance as both an unaffiliated and unconventional family by the Jewish community.

“I never felt any judgment in terms of the way our family is Jewish,” Sherry says. Instead the welcome they received was clearly, “We’re here for you now, whatever your needs are.” Their son Julian’s takeaway also exceeded their expectations. As Sherry tells it, “After the fun party, I asked Julian what was your favorite part? He said, ‘Reading from the Torah because it’s such an accomplishment,’ knowing this is something Jews have done throughout millennia. It’s important to a person’s sense of identity.” And clearly it’s a tradition that lives on as the Jewish community continues to adapt to an ever-changing world.

Founded in Hollywood in 1957, Temple Beth El is a progressive congregation, blending Jewish values, study, social action and traditions into a house of worship, education and community. For more information call 954-920-8225 or visit www.templebethelhollywood.org