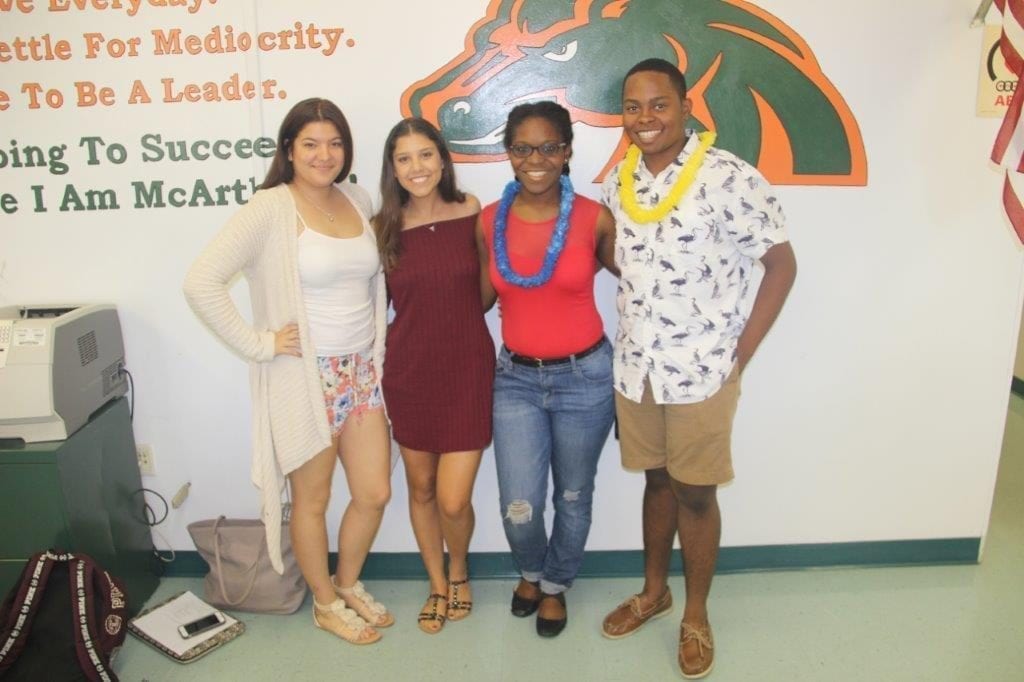 McArthur High School graduate Matamron Bacon developed leadership skills in his senior year that helped him get accepted into an acceleration program of education and law school at St. Thomas University.

A number of McArthur High School 2017 graduates achieved a high level success, which will serve them well as they pursue their dreams at institutions of higher learning and beyond.

Matamron Bacon is an up-and-coming community leader with a bright future ahead of him.

During his last year at McArthur High School, Bacon was the senior class president and an advisor to the Broward County School Board. Next year he will go to St. Thomas University where he has been accepted into an accelerated program allowing him to complete three years of undergraduate education and immediately follow with three years of law school.

A well-spoken young man, Bacon believes he developed strong leadership skills by learning how to provide students with what they wanted. He also learned how to work with adults by working with the School Board.

“I led Spirit Week and I had to cater to the students,” Bacon said. “This was a challenge. We had fun activities such as Character Day, Twin Day, Wacky Wednesday, Tourist Day and Celebrity Day. It was a lot of fun but I had to find out what the students wanted.”

Working with the School Board was another challenge for Bacon. He was able to work with the school officials to reduce the emphasis of standardized tests on student evaluations. He also learned about the problems associated with running a large school system.

Bacon attributes much of his success to his parents. He saw how his father worked with people as a bread distributor and he saw the compassion his mother had. “My parents really motivated me and taught me how to work with other people,” he said.

When Melanie Aguilar first came to McArthur she did not know anyone. “But as I became involved in organizations I learned to step and become a leader,” she said.

Melanie Aguilar has been a leader in a wide variety of student activities at McArthur High School. She has been the Senior Class Historian, Ecology Club Historian, Student Government Association (SGA) Recording Secretary and National Honor Society Treasurer.

“I learned a lot from being a leader in each organization,” Aguilar said. “As treasurer of the National Honor Society I learned how difficult it can be to work with money. Sometimes it was hard to get people to turn in money by the day it was due.”

In the SGA, Aguilar learned how to guide other people. She played a leadership role in the Harvest Drive and made sure that all food for distribution was in good condition.

“We fed over 100 families. It was good to see all the students come together to help people in the community,” Aguilar said.

Through participating in student organizations, Aguilar developed strong relationships and friendships. “When I first came to McArthur, I did not know anyone. But as I became involved in organizations, I learned to step and become a leader,” she said.

Aguilar came to the United States from Cuba at age 5. She saw her mother work hard to achieve success and this motivated her to work hard. Aguilar wants to study biomedical science at Florida International University. She wants to be a pediatric surgeon.

Khayla Rodriguez held a number of leadership positions as a McArthur High School student. In the fall she will attend Florida A&M University where she will study to become a pharmacist.

“With FFA, organized rallies and ran events for students. I want to be in a position where I can teach others,” Rodriguez said.

Rodriguez led an effort to provide clothing, money and books to people in financial need. She was involved in helping a homeless teenager who was also taking care of a younger sister. “I love to help other people,” she said. “I want to bring out the best in people.”

Her mother is an important inspiration for her. “My mother came from Haiti at 18 and showed me that I can do anything I want to in life,” Rodriguez said. “My teachers have motivated me.”

McArthur High School’s Class of 2017 valedictorian was Caterina Schreiber, who brought back Best Buddies and wants to pursue a pharmacy degree.

Caterina Schreiber was the valedictorian of McArthur High School’s Class of 2017. She earned a GPA of 5.02, her favorite subject is chemistry and she also likes to study English Literature. She will attend Florida International University in the fall with plans to go to Pharmacy School.

Schreiber is also vice president of Best Buddies and was the Historian for the National Honor Society.

“I have always had an interest in chemistry and I want to help other people. I enjoyed helping people through Best Buddies,” she said.

Schreiber was inspired by her parents to do well academically. Her mother, Denise Schreiber is a teacher at McArthur. Her father did not pursue an academic career but wanted his daughter to do well in school.

“My mother is a selfless woman and I saw how she volunteered her time to help others and this inspired me to want to help people. Both my parents stressed that I should do well in school,” Schreiber said.

The students all said they believe in the administration of McArthur High School. They believe the school’s leadership is very good and all have enjoyed working with their teachers.

“I like the fact that there is so much diversity here,” Rodriguez said. “People from a wide variety of backgrounds come together and really get along.”

Bacon said he likes the fact that McArthur’s principal, Todd LaPace, has an open-door policy. If possible, he would take time to talk with students about organizations they want to start or issues they may be having.

Aguilar was also impressed with the diverse atmosphere of McArthur. “There are so many organizations and so many opportunities for students,” she said.

“It is not hard to start a club here, Schreiber said. “I was able to bring Best Buddies back.”

The students are all looking forward to going to college and then starting careers. They all say their experiences at McArthur prepared them well for a successful future.