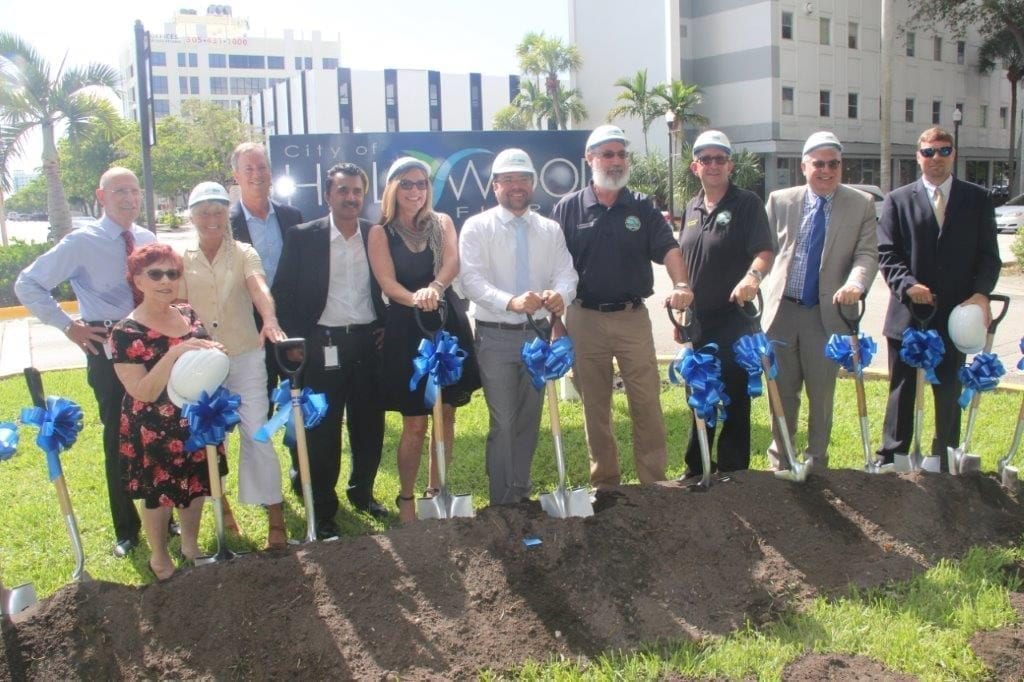 Hollywood Commissioner and Broward MPO Chair Dick Blattner was one of the speakers and said he believes the project is important for the city’s development. “Hollywood is on the verge of becoming a hot city and this project will good for the development of the City,” he said.

The Hollywood Boulevard Complete Streets project is considered a model project of an urban area in Broward County. It is the first one and a signature project in the County. A major goal is to make the downtown area a more attractive place to live and work. It will be more friendly for bicycle riders and pedestrians.

Broward MPO executive director Greg Stuart said, “A lot of people worked hard to make this project a reality. This will be good for the community.”

From the Complete Streets description on the city’s website: City of Hollywood founder Joseph Young envisioned a “Dream City” on the Atlantic with bustling, tree-lined, pedestrian friendly corridors that criss-crossed their way to the Everglades. That vision is being reimagined for the 21st Century as “Complete Streets” – corridors designed and planned to accommodate all forms of transit with a focus on safety, convenience and comfort for people of all ages and abilities.

The Florida Department of Transportation has awarded a $7,667,258 contract to Acosta Tractor, Inc. for the project. It is part of a larger $160 million investment from the Broward Metropolitan Planning Organization (MPO) to create safer and healthier communities by providing and enhancing bicycle, pedestrian and public transportation access in Broward.

“This will be good for local businesses because bicycle riders and pedestrians will ride or walk by the local businesses and may stop in,” said Ricardo Gutierrez, liveability mobility manager for Broward MPO. “It is good for people’s health to walk and ride bicycles. We want more people to bicycle and walk to work,” he said.

Also, work will include the upgrading of signs and pavement markings to reflect the new roadway configuration to include two lanes in each direction throughout the entire corridor and a four-foot bike lane in each direction separated by a two-foot buffer throughout the entire corridor. The existing water main and connections at various cross streets will be replaced.

After the ceremony, there was a tour of the corridor so people could see the different elements that will be included in the completed project.

Commissioner Debra Case believes it will improve Hollywood and said, “This is a good project and it has been a long time in coming.” And Vice Mayor Traci Callari added, “This is a great day in Hollywood. We are moving forward.”