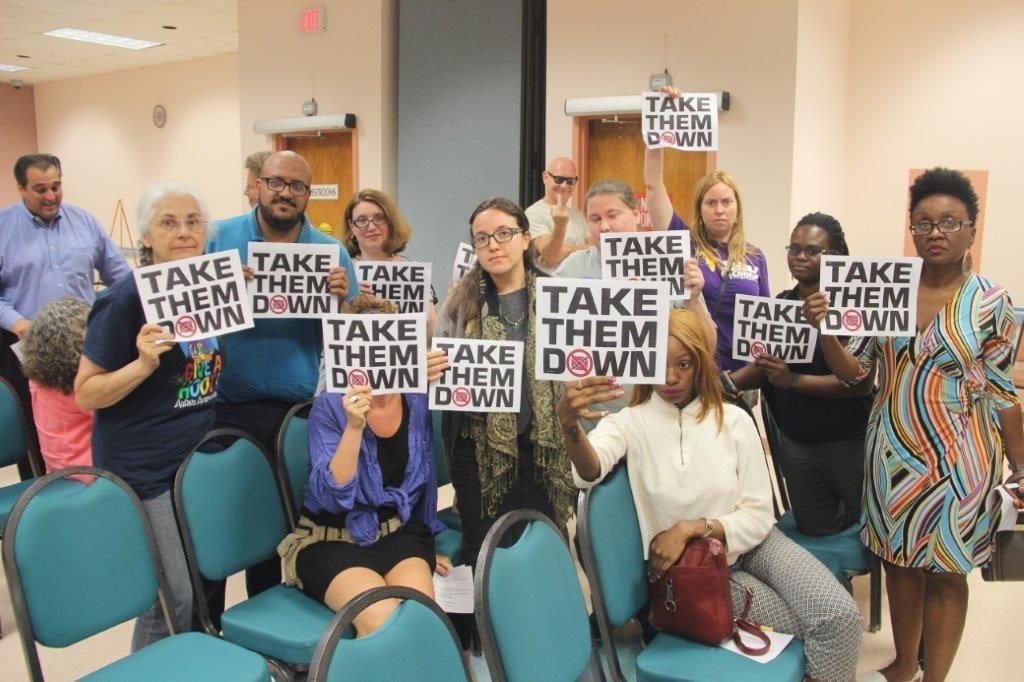 Commissioner Debra Case hosted the District One Commission in the Community event.

with the mayor and commissioners and enjoy some pizza.

A group residents expressed concern about the signs named after Confederate Generals Nathan Bedford Forrest, Robert E. Lee and John Bell Hood. Many of the people who spoke asked the Commission members to take the signs down. They brought signs saying “Take Them Down.” Some of the speakers gave impassioned speeches saying that he signs represented hatred against African Americans. They said that Confederate generals should not be honored because they fought for slavery.

A group of residents protest Hollywood Street signs named after Confederate generals at Commission in the Community event.

One man said he could not believe the  signs were still up. A woman held up an old newspaper advertisement for Forrest’s slave trading business. A woman said that it might be good for city leaders to be educated on the importance of equality. Another woman gave an impassioned speech on being a victim of racism.

There was discussion on the problem of vacation houses in Hollywood. One man said living next to a vacation house was hell and he wanted the loud parties to stop. Others said they want more stronger zoning codes to prevent some of the problems associated with vacation rentals and party houses. They want stronger licensing requirements. Right now, there are about 780 vacation rental operations in Hollywood and only 52 are licensed by the city. This is a problem that many residents and city leaders want to see corrected.

Also, a woman made a recommendation that the City should have a bond to pay for infrastructure improvements and items such as a new police station.