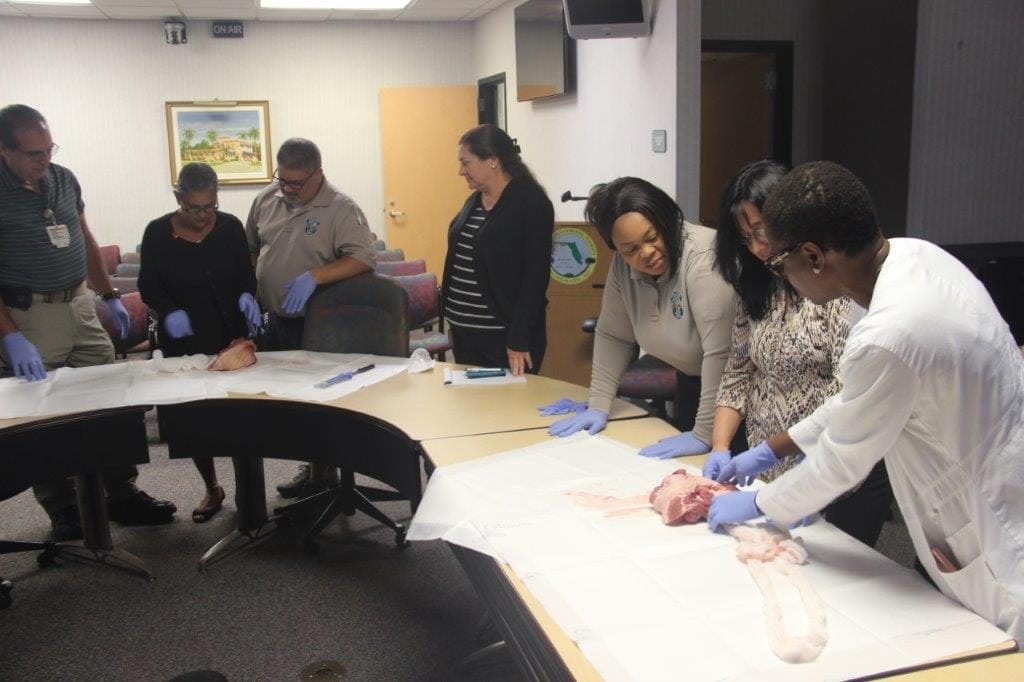 Being trained in how to respond to traumatic injuries will soon be as common as CPR training, which is why a group of City of Hollywood employees received training on the use of bleeding control kits at City Hall.

Candace Pineda, RN, is the Trauma Program Manager at Memorial Hospital, and led the training program.

“This is part of a national initiative to educate people on how to respond to traumatic injuries,” said Candace Pineda, Trauma

Program Manager at Memorial Regional Hospital and the trainer who led the effort. “This is part of a movement that recognizes bystanders are often first on the scene, and their actions could help save a life. The goal of Memorial Trauma Center is to see this training become as universal as CPR.”

The City of Hollywood and Memorial Healthcare System are working together to offer education and training in how to respond when a traumatic injury is caused by an accident or act of violence until help arrives. Grant monies that were received, purchased the life-saving bleeding kits used to train individuals who have had no prior medical training. Hollywood received 90 kits with tourniquets and other first aid materials. The kits will be installed in visible locations near emergency equipment, such as defibrillators in city facilities and community centers such as City Hall.

Jennifer Solinger, human resources administrator for Hollywood, said the goal is to get all City of Hollywood employees trained in the use of the kits.

“We have mandatory training for City employees. We want to be proactive with this program,” she said.

During a recent session, 400 city personnel received training from the hospital’s trauma team. They learned basic techniques to help control bleeding and then practiced on training mannequins. An important goal is to help individuals become trained and empowered to act in a bleeding emergency before professional help arrives.

The blood-control training of personnel took place at City Hall. Employees train on each other.

Hollywood Fire Chief Chris Pratt is pleased with this program. “While help is on the way, bystanders can take the very important first steps in saving someone’s life. By offering training, and having these tool kits easily accessible and ready to go, the better the chance a victim will have for a positive outcome in an emergency situation.”

The Stop the Bleed campaign was started in October 2015 by the Department of Homeland Security, following a study of mass casualty events, which revealed response and outcomes could be improved with aid from bystanders. According to a recent National Academies of Science study, trauma is the leading cause of death for Americans under 46. A person who is bleeding can die from blood loss within five minutes, so it is important to quickly stop the loss of blood. Those nearest to someone with a life-threatening injury are best positioned to provide initial care until an ambulance arrives.