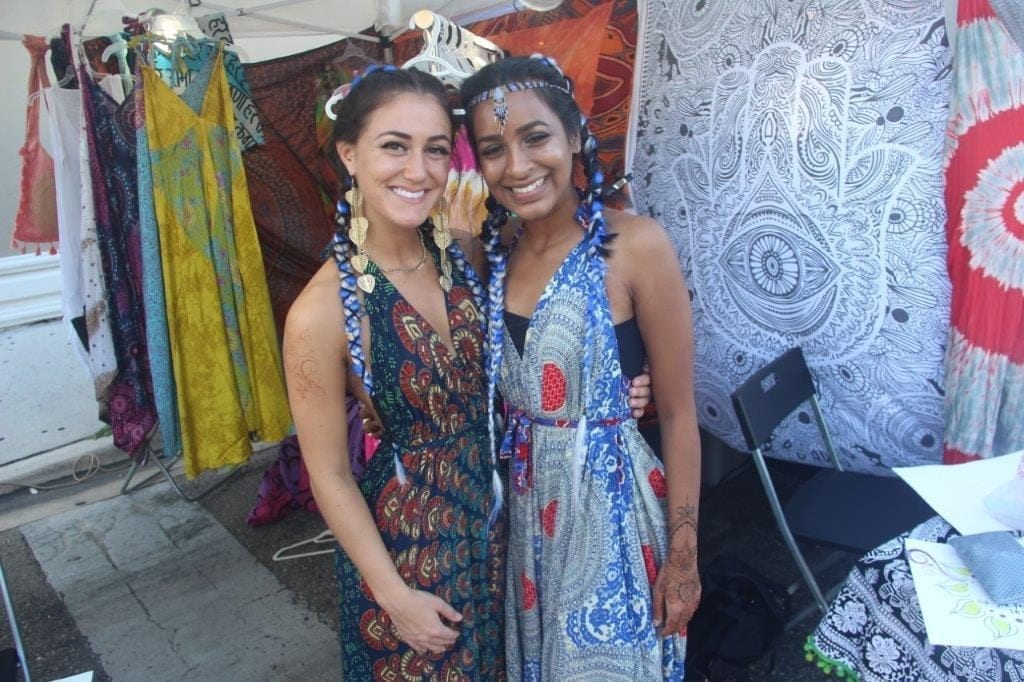 Maria Boshes loves creating clothes from recycling materials. She cares for animals and enjoys bicycle riding. And she has a T-shirt line, a couture line and men’s clothing that is made from upcycled clothing.

“I make clothing out of fabric that is upcycled. I create the clothing I sell by hand,” Boshes said. Her T-shirts often show experiences from her life. Often they include bicycles and dogs. She rescues dogs.

Boshes, a Hollywood resident, was selling clothing with her daughter, Mia Boshes, during a recent Artisan Market at the Downtown Hollywood Artwalk. The Saturday evening event, in the downtown section of Hollywood, featured an eclectic mixture of vendors selling clothing, artwork, food and other items. Live music entertained all who were there.

Vendors included people like Fernando Marquez and Angel Morales selling coconut shakes and coconut water. “This is a great event and is good for local vendors,” Marquez said. “We are having a good time tonight.”

Stephanie Bracken, of CommuniTea Center, was selling various teas. “We always get a good crowd here,” she said.

International clothing was also for sale. Mariela Tumene was selling garments mostly from Thailand but some from India. She enjoyed the atmosphere of the Artisan Market. Sadiyah Ali and Caitlin Morris were trying on and modeling the clothing from Thailand and said they were having a good time.

Many interesting items were available at the market. “I am selling handmade baby shoes I made myself,” Zsofia Inhauzer said.

For some, the Artisan Market offered an opportunity to perform for a crowd. Ruby Cadilac was lead guitarist for two bands that performed a couple of sets during the night.

The atmosphere was alive and electric as vendors spoke with customers and families enjoyed being together. Attendees walking around were also glad to have so many choices for a meal at one of the nearby restaurants and view some of the murals adorning downtown buildings.