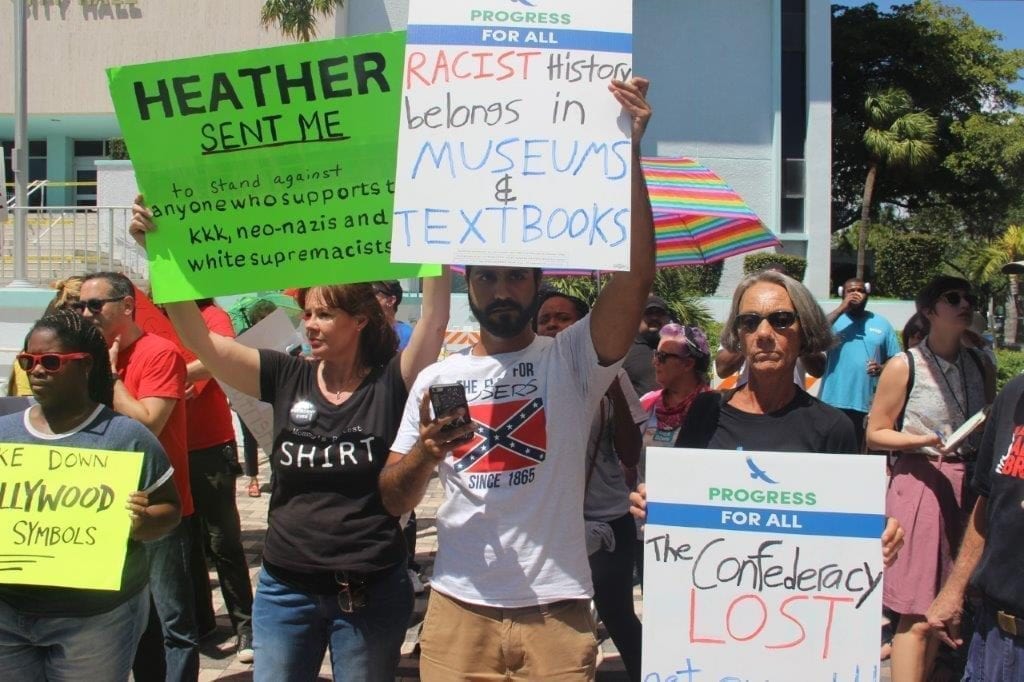 After about six hours of debate and discussion and hundreds of people speaking during public comments, the Hollywood Commission agreed 5 to 1 to change the names of the streets in Hollywood named for Confederate generals Forrest, Hood and Lee.

Public comments wrapped up around 10:30 p.m.

Most spoke in favor of the signs being taken down with impassioned speeches against the Confederacy and the generals and soldiers who fought for the Confederacy. Local political leaders including Congresswoman Debbie Wasserman Schultz, State Rep. Joe Geller, Rep. Shervin Jones and Commissioner Beam Furr spoke. They all said the signs represent hatred and oppression of African Americans and must be taken down.

Benjamin Israel, a major leader of the movement to remove the signs, spoke on the importance of taking the signs down. He considers the inconvenience residents on the streets will face a minor thing compared to what African Americans experienced as slaves and during the Jim Crow period.

During the meeting some residents expressed concern that the people on Lee, Hood and Forrest street were not permitted to vote on whether they wanted the names changed. Close to 200 people signed up to speak during the meeting.

Earlier in the afternoon, about 100 people who wanted the names changed got together for a demonstration. Rep. Jones and Dr. Tameka Hobbs, a professor of African American History at Florida Memorial University spoke. They expressed a need to remove the signs because they represent hatred and racism.

They sang the Black National Anthem and We Shall Overcome. Many of the demonstrators were passionate but they were peaceful.

“There have been a couple of scary people who sounded aggressive and became insulting on the ‘against’ side, but the hearing is crawling with law enforcement, so they spoke and sat down,” said activist Lynare Robbins who attended the meeting.

The City Commission will hold a meeting next week to discuss the street’s new names. Residents will be notified prior to the meeting.