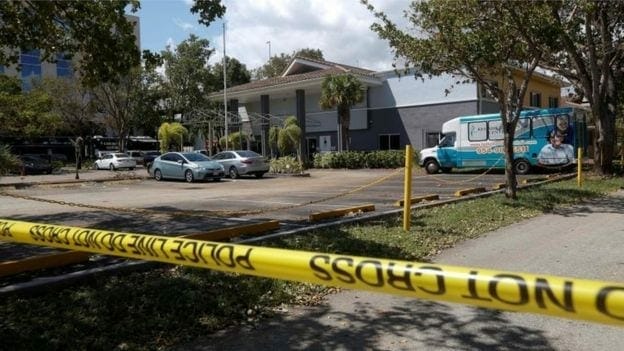 The City of Hollywood is now reporting that eight people who were living at The Rehabilitation Center at Hollywood Hills died this morning, September 13.

Shortly after 4:00 a.m. Hollywood Police and Hollywood Fire Rescue responded to a call for service at The Rehabilitation Center at Hollywood Hills, 1200 N. 35th Avenue in Hollywood, Florida. This facility is not affiliated with Memorial Healthcare System. Crews found several patients in varying degrees of medical distress and immediately began treatment. Three patients were found deceased in the facility, others in need of immediate transport.

The New York Times reported that authorities learned another person had died early in the morning and was initially uncounted because the person had been taken directly to a funeral home.

After Irma, the facility had lost a transformer that powered the cooling system and the backup generators failed to power the air conditioning system.

Four additional patients died shortly after being transported to Memorial bringing the total number of deaths to eight. The causes of the deaths are currently under investigation but are most likely thought to be heat related. The Hollywood Police Department is currently conducting a criminal investigation into this situation to determine the circumstances that led to the patient deaths.  State investigators from the Florida Office of the Attorney General are also on scene.

A second adjoining facility, Larkin Community Hospital Behavioral Health Services, is relocating 18 additional patients. These are not medically compromised patients, but due to the investigation were required to be evacuated.

Memorial Healthcare System has set-up a family information line for patient family members seeking an update on the status of their family member. They may call Memorial Hospital at 954-265-1074. Additionally, Hollywood Police are conducting welfare checks on 42 Nursing Home, Assisted Living and Critical Care facilities located in the City.

North 35th Avenue near Memorial between Taft and Johnson Streets has been closed to through traffic.  Additionally, the public is advised that due to the traffic closure and the volume of activity, anyone that does not need to come to Memorial Regional Hospital for treatment or other medical necessity, refrain from doing so.

Hollywood Mayor Josh Levy added that about half the people of Hollywood still don’t have power.

Governor Rick Scott said, “I am absolutely heartbroken to learn of news reports of the deaths of multiple individuals in a nursing home in Broward County. Protecting the lives of Floridians is my top priority and that’s why we have worked all week to help Floridians prepare and respond to Hurricane Irma. I am going to aggressively demand answers on how this tragic event took place. Although the details of these reported deaths are still under investigation, this situation is unfathomable. Every facility that is charged with caring for patients must take every action and precaution to keep their patients safe – especially patients that are in poor health. I have directed the Agency for Health Care Administration and the Department of Children and Families to immediately work with local law enforcement to conduct an investigation, and if they find that anyone wasn’t acting in the best interests of their patients, we will hold them accountable to the fullest extent of the law. I am also asking available first responders to immediately check in with the healthcare facilities in their area to make sure nursing homes and assisted living facilities are able to keep their residents safe.”

The state has taken the following actions regarding Hurricane Irma preparedness and response for healthcare facilities: