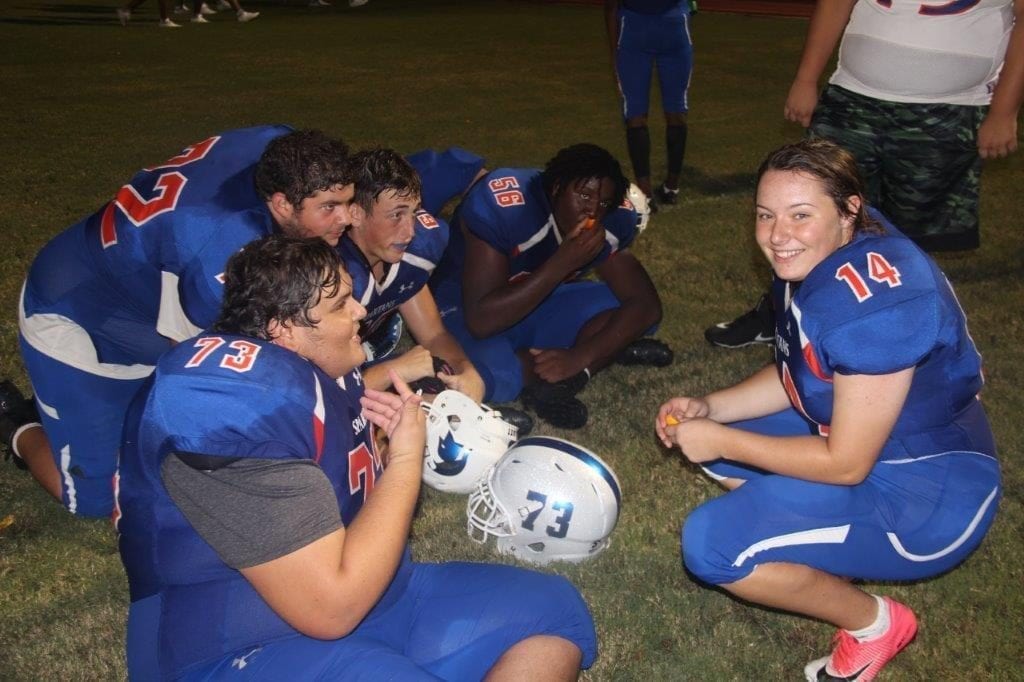 Holly Neher is the first girl to start in a high school varsity tackle football game in Broward County and possibly the nation. She was the starting quarterback for Hollywood Hills High School in a game against Pompano Beach High School on Sept. 22. The Spartans won the game 51 to 27.

Coach Brandon Graham is proud of Neher and said that she earned the position. “She’s been playing very well and she earned the opportunity to start,” said Graham.

Neher loves being a part of the team. “Playing quarterback is an amazing experience. I love my teammates. They are all like brothers to me,” she said.

Neher enjoyed some success in her first start. Early in the game, she passed the ball to Alexander Shelton who scored touchdown.

The touchdown was nullified because of a holding penalty. Later in the first quarter, Neher threw another pass to Shelton who then ran it in for a touchdown. Shelton also had a very impressive game. Emile Bien-Aime also played quarterback for the Spartans and performed well.

Neher, who plays on the girls’ flag football team during the spring season has insisted on no special treatment. When on the sidelines, she is just one of the players enjoys being a part of the team.

Alexander Shelton may be best player in Broward County who is not as well known.

He plays wide receiver and cornerback on the Hollywood Hills High School football team and scored five touchdowns during a recent victory over Pompano Beach. (Actually he scored seven but two of the touchdowns were called back.)

Coach Brandon Graham was impressed and said that Shelton scored on pass receptions, run plays and on a punt return. “He is the best pure athlete I have ever coached. He’s a great football player,” said Graham.

Coach Graham said Neher will continue to play a major role on the Hollywood Hills team. “Holly does what we ask of her. She stays after practice to get more throws in. She is playing well and understands the game plan,” he said.

Emile Bien-Aime is also playing quarterback for Hollywood Hills. Ramon James, who was the leading quarterback at the beginning of the season is now playing receiver.