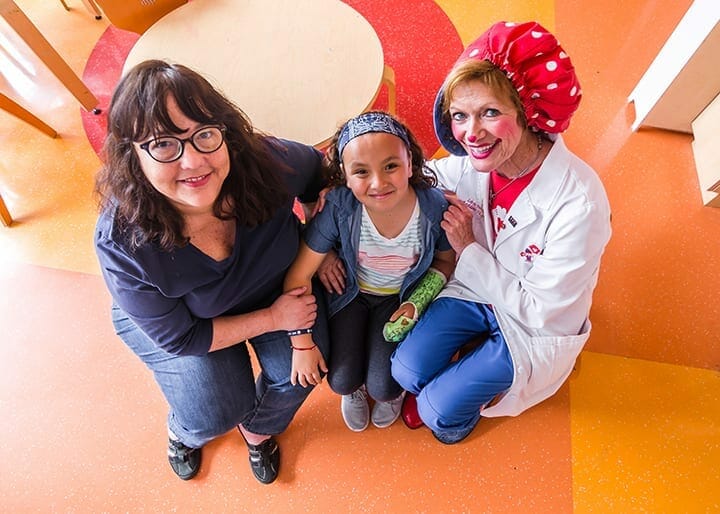 The deal that led to an American icon sharing his name with what has become one of the nation’s premier pediatric healthcare facilities was sealed the old-fashioned way, with a promise and handshake.

The promise, made by then Memorial Healthcare System President & CEO Frank V. Sacco to Joe DiMaggio, was that no child would ever be denied care because his or her family was unable to pay. That was all the very private “Yankee Clipper” needed to hear to endorse a very public use of his name and image. The baseball Hall of Famer then took things a step further after that, cutting the ribbon on the newly-christened Joe DiMaggio Children’s Hospital (JDCH).

In the 25 years since, JDCH has grown from a few units on a single floor at Hollywood’s Memorial Regional Hospital to the largest pediatric hospital serving Broward, Palm Beach, and northern Miami-Dade counties. A freestanding facility specially designed to meet the needs of children and families opened in 2011 and today features 650 physicians, 226 licensed beds, seven operating rooms, and an entire floor dedicated to oncology. Rehabilitation, dialysis, emergency care, and a cardiac surgery program that has performed 36 heart transplants in less than seven years are just a few of the other areas of specialization.

“We’re a quaternary care facility, meaning we treat some of the most complex and critical clinical conditions,” said Chantal Leconte, FACHE, administrator and chief executive officer at Joe DiMaggio Children’s Hospital. “We’ve grown in the last 25 years into a pediatric healthcare destination that’s known for clinical expertise, advanced technology, and a patient and family-centered approach to care.”

The hospital’s 25th anniversary has inspired celebrities like singer Joey Fatone, Daymon John of “Shark Tank,” the Miami Marlins Giancarlo Stanton, and many community leaders to raise a red glove in a video salute to the children’s hospital.

Part of the Memorial Healthcare System (www.mhs.net), the stand-alone facility has received considerable recognition. It was the world’s first children’s hospital designated to be Patient Centered by the Planetree organization, has earned the Press Ganey Guardian of Excellence for Patient Experience five consecutive years, and has been ranked among the top 50 children’s hospitals in the country by U.S. News and World Report for the past five years.

Moving forward, a pediatric kidney transplant program will soon launch and a Joe DiMaggio Children’s Hospital specialty practice will open in Wellington in 2018. It will be the hospital’s third physician practice in Palm Beach County.

Additionally, there are plans to double the size of the current Joe DiMaggio Children’s Hospital in Hollywood, eventually making it an eight-story building. Memorial Healthcare System administrators believe the move will further increase patient access to high-level, pediatric healthcare in South Florida, which has been a guiding principle for the past 25 years.

And, all the kids Joe DiMaggio was so concerned about being cared for?