Honor Flights – One Last Mission Honoring Those Who Have Served 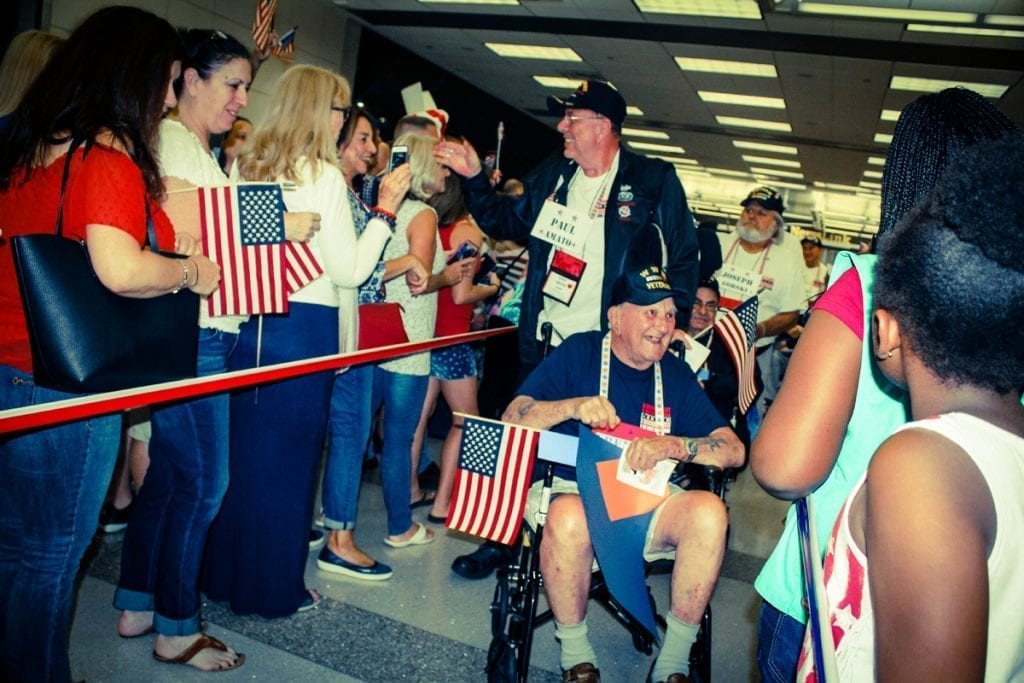 Shortly after I moved to Hollywood to be closer to my aging father, he experienced what he said was “one of the greatest days my life”, when he traveled to Washington D.C. on an “Honor Flight”, where he was lauded and celebrated all day for being a WWII veteran.

“That’s exactly the response we love to hear,” said Rick Asper, chairman of Honor Flight South Florida, formed four years ago to focus on finding and honoring vets from the tri-county area from Broward to Monroe. “It’s truly a labor of love for us, and
especially for the WWII vets, who are quickly diminishing, it’s something we’re really focusing on these days.”

On their day as the guest of the Honor Flight Network, the vets are flown on a charter flight, each with their own escort (their “guardian”, more on that later), taken to the military monuments throughout D.C. and at every point, greeted, cheered for, lauded with compliments, thanks and applause, and completely treated like the heroes they are, each for whatever piece they provided to keep America the land of the free and home of the brave.

The Honor Flight program was conceived by Earl Morse, a physician assistant and Retired Air Force Captain, who worked for the Department of Veterans’ Affairs. After years of working with WWII vets, it became clear to him that, while most of them yearned to visit Washington and see the WWII Memorial, it simply wasn’t financially or physically feasible for most these men and women, many now elderly, to make the journey.

Earl was also a private pilot, so he began inviting some of his veteran patients to fly to D.C. with him. It was so rewarding, for both the vets and for him, that he began enrolling other pilots in his aero club to join him. In January of 2005, Honor Flight was born.

The first flight took to the air in May of 2005. Six small planes flew 12 veterans to visit the WW II Memorial. Soon, commercial aircraft became necessary to accommodate more veterans. Needless to say, the results were awe-inspiring for both the vets and the pilots. By the end of the first year, Honor Flight had transported 137 WWII veterans to their memorial.

The mission and ideals of the program began to spread to other cities and states and the program expanded. By 2006, commercial flights were exclusively used due to the increasing number of interested veterans as well as other things like need for wheelchairs, and adverse weather conditions which prohibited small aircraft from participating on a regular schedule.

Rick Asper joined the Honor Flight Network in 2013 and with his group of co-founders, Honor Flight South Florida was formed. Previously, the flights for this region had been handled out of another hub in Stuart. A Vietnam era Army veteran himself, Rick was in D.C. on business several times a year, and when there, he often visited the war memorials. One day, at Arlington national cemetery, he saw a line up of buses before the changing of the guard and walked over to see what was happening. A conversation ensued, and he was asked if he’d like to get involved.

“Suddenly, I heard my name,” he recounted, and saw a former client and old friend who had been a WWII bomber pilot. He was from Waco, TX and there with an Honor Flight group. The friend appealed to him to take on opening a branch in the south Florida region.

“For a month, I got calls every few days,” he recalled.

“So finally I got some people together and we decided to do it.

Honor Flight South Florida was officially started in 2013 and has run 13 flights since then, approximately three to four per year with about 75 honorees per flight. In preparation for their flights, each vet is assigned a “Guardian”, who meets them prior to the flight to get to know them, and escorts them on a one-to-one basis throughout the entire day.

The vets are picked up by their guardian, and driven to the airport where they board a charter flight filled with other vets, as often as possible from the same war. On most fights, any able-bodied volunteer can be a guardian. Often, they are active duty military, reservists or family. However, on one flight a year, the Guardians are “Elite Guardians” — Vietnam vets and honorees as well — which give HFSF a chance to double the amount of honorees on the flight.

Honor Flights started with WWII Vets, and have now added Korean War as well as vets from other conflicts who may be older or in poor health. They are picked up and escorted by the same person all day, and brought home at night.

“We’re losing our WWII vets at an alarming rate, and it’s incredibly sad for us,” said Rick, “especially when they’re on our waiting list. We do our best to get them on the flights in age order, and it’ll still be a while before we run out of WWII and Korean War vets.”

HFSF Moves Into the Future

Most charities are on a constant search for money. But Honor Flight South Florida is now on an aggressive campaign for not only funds, but also for volunteers and for more participants.

“Volunteers are the heartbeat of our organization,” said Rick. “It takes a lot of work to honor and respect our nation’s heroes.” For volunteers, “We are blessed with hundreds of people who give us a lot of time and effort to make these missions happen,” Rick said proudly. “There are so many opportunities to make a difference.”

There are meeting every few weeks, including the board of directors and the various committees. Meetings of course multiply as flight dates approach. Fundraising efforts include “everything we can think of” he said, explaining that costs for each flight add up to about $100,000.

Flights take place in the spring and the fall, in consideration of the comfort of the vets, with the goal of four flights, and 300 vets, per year from South Florida, one of the largest geographical territories in the organization.

The time between flights is used for fundraising. HFSF works with the Broward school district schools service clubs as well as other clubs such as Kiwanis, Lions, American Legion, VFW, Vietnam Vets, and other generous service organizations, which hold events and galas, sometimes with military themes, to raise funds for them. Thinking out of the box, he noted that, for example, this year, they were “delighted to be the official charity” of the Fort Lauderdale Small Boat Club, and the recipient of funds from several generous restaurant events in the three counties.

Finally, HFSF continues on its quest to bring every living veteran to Washington to see their memorial and experience their day of honor.

“It is our goal to have as many of them as possible saying that it was one of the best days of their lives,”
stated Rick.

Hollywood Gazette Publisher Jennifer Love and I had the “honor” ourselves to attend the homecoming of the most recent South Florida Honor Flight. Over 1000 people turned out at FLL to welcome the flight home on a Saturday night. Many of them told me that they come to every homecoming. From newborn babies swaddled in red, white and blue to seniors and vets in their own “honor chairs”, uniformed bands and military presence, Boy and Girl Scouts, teens there of their own volition, people holding signs and banners and handwritten notes and flowers, we all cheered and gave thanks for the service these men and women provided. Lots of smiles, lots of tears, lots of hugs and handshakes, and if you’re getting chills and a little teary….well, so am I, just recalling it. The best, for me, was a little girl, maybe four or five, who insisted on hugging every person that came by.

Priceless. For everyone. It was an incredible experience.

My Daddy would be proud.

If you’d like to get involved with Honor Flight South Florida, as a volunteer, an honoree, a guardian, a fundraiser or a supporter, please go to their website at www.HonorFlightSouthFlorida.org or give them a call on 855 FLY 1 VET (855-359- 1838).

I promise you an experience that will make a difference, for others, and for you.