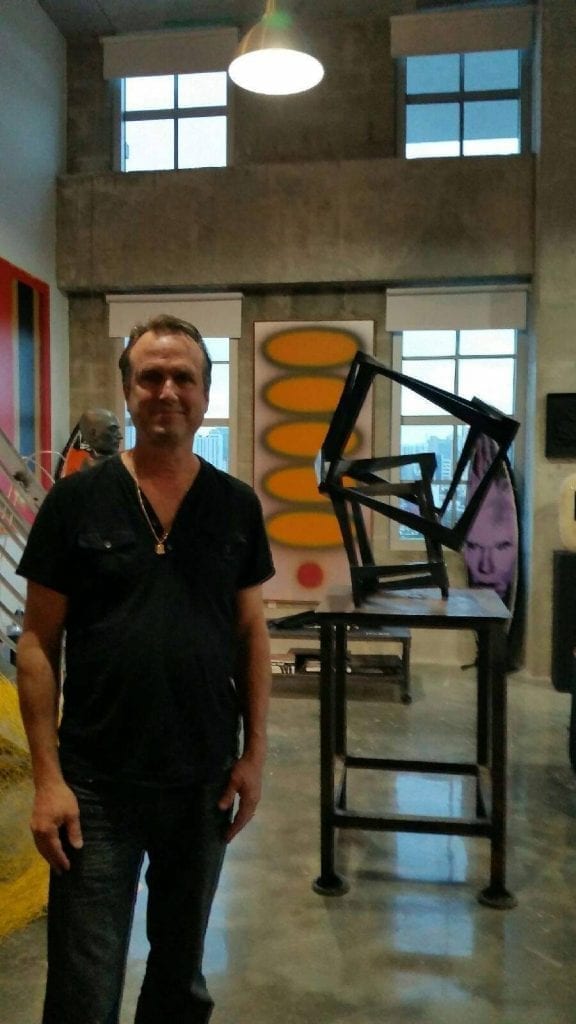 Troy brings a lot of New York know-how to the Hip Hamlet of Hollywood’s art scene.

He and his wife Allison moved to SoFlo in 1991 (settling in Boca for 25-years before moving to Hollywood about a year ago).

But let’s go back to Hofstra University (Long Island, New York) where Troy (a budding artist) headed up the Fine Art Club and opened a student art gallery. It wasn’t long before the go-getter had his first gig working for the Conservation Frame Gallery in New York City (this seminal space framed for MOMA and such artists as Roy Lichtenstein et al).

It was in New York City that Troy met Allison—they’ve been inseparable ever since.

Troy’s art groove grew and he eventually found his “Photo-Graffiti” style, exhibiting in restaurants, cafes, clothing stores and, of course, galleries throughout Gotham.

“I was influenced by living in New York City and the 24/7 energy that was all around me. Having the works of artists like Andy Warhol, Keith Haring, Roy Lichtenstein, Kenny Scharf, CRASH, Daze, Richard Hambleton and others actually available to be viewed in person was incredibly inspiring.”

The couple moved to Boca (as previously noted, in 1991) and over the years witnessed the deterioration of the local art scene.

“So many venues which promoted the arts—small galleries, shops of interest, restaurants and chain stores were either closing down or cutting back on exhibiting local artists.”

The pair found themselves seeking, beyond the confines of Boca Raton, hitting spots in Fort Lauderdale, Dania and of course, Hollywood.

“From all those areas, we found Hollywood to be more diverse and interesting than anywhere else. During our visits to Hollywood, my wife and I would talk about Young Circle’s Art Park and the Mural program. We noticed new little shops, galleries and studios popping up and decided we wanted to live in an area with an up and coming arts and culture community.”

The Hip Hamlet hoists one for Troy Giorgio…