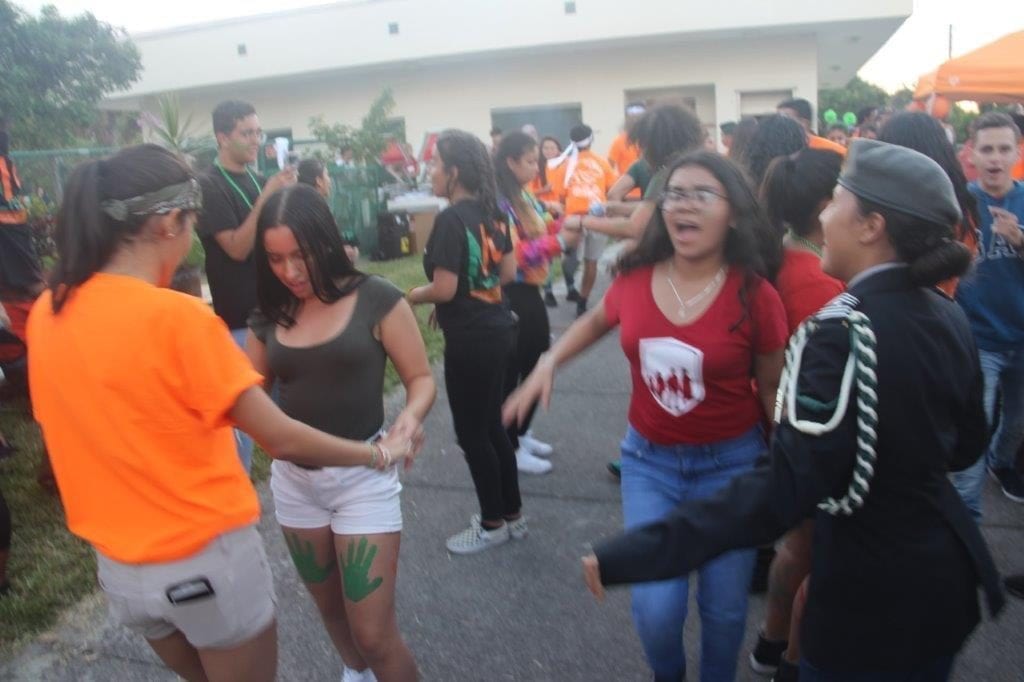 The McArthur High School community got together on October 27th to celebrate Mustang Fest. It was a fun event and many of the school’s clubs participated. They each had booths where they could meet with people and discuss their program offerings with students.

And it was a great deal of fun. Many of the students danced and enjoyed some upbeat music. Much of the dancing was spontaneous and most everyone was in a friendly mood.  Many students enjoyed a pleasant social scene and got to know each other better.

Mustang Fest was organized by the Student Government Association. Melany Quintero, vice president of the SGA said. “We love to promote school spirit and want wanted to make this a fun event. We encouraged all the clubs in the school to participate,” she said. The SGA is running the Harvest Drive and is involved in developing student leaders.

Hector Estevez, a member of the SGA Spirit Committee said, “We had a lot of fun. We want to encourage school spirit at McArthur High School,” he said.

Ashley Armentos, president of Latinos in Action enjoyed being a part of Mustang Fest. Many of the club members were present. “We had a good time tonight. We have fun together,” she said.

Yuliana Espinosa, treasurer for the Junior Class said, “This was a really good idea. It is a great way for students to get to know each other better,” she said.

Carolina Valenzuela president of the McArthur High School Debate Team was among her teammates. She said it was good for school spirit. The Debate Team members enjoyed spending time together.

Jessica Gorkowski, a member of the school’s robotics team, the Mighty Mechanical Mustangs also enjoyed spending some time with her teammates at the event.

Senior members of the McArthur High School Marching band were honored just before the game started. The band has a strong program with about 140 members.  It performs at home games and participates in parades and competitions. Many of the members consider the band to be a family and love being a part of it. They also enjoy the opportunity to perform and to develop as musicians.

Drum Major Isabella Zamudio who also plays the flute has loved being in the band. “We have a lot of fun together,” she said.

The band gave a rousing and enthusiastic performance during the game.

The McArthur football team competes against Boyd Anderson for its homecoming game. The Mustangs lost 14 to 6 but gained valuable game experience.