Those Flocking Pink Flamingos are Back in Downtown Hollywood! 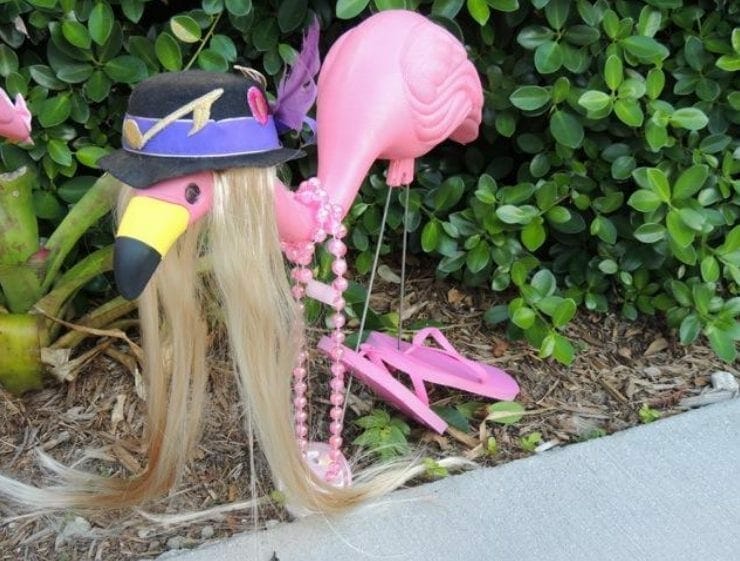 For the fourth year, The Hollywood Women’s Club is getting ready to decorate downtown Hollywood with their amazing flock of holiday Pink Flamingos.  And for the second year running, thanks to their partnership with the Downtown Hollywood CRA, which just donated an additional 100 flamingos, they’ll be seen up and down Hollywood Boulevard, from Young Circle to Dixie Highway, all day on Friday, December 1.  Along with last year’s CRA gift of 100 birds, the flock now numbers over 300!

From December 1 through December 27, about a dozen specially decorated flamingos will be on display in the window of Mickey Byrnes at 1921 Hollywood Blvd.  Vote for your favorite bird with a photo on the Hollywood Women’s Club Facebook page, using the hashtag hollywoodflamingoflock.  The winning decorated flamingo will be announced on December 27th at 5:00 pm at Mickey Byrnes.

Each year, the Hollywood Flocking picks up more and more exposure.  Last year, it received coverage in the Sun-Sentinel and on Channel 7 News.

YOU CAN FLOCK, TOO!

Starting on December 2,  the flock will begin showing up on lawns around Hollywood.  For a donation of $35 to the Club,  you can flock a neighbor, friend, family or a business.  The birds will arrive at the designated spot at around 7 am and remain there until that evening.

“It puts a smile on everyone’s face” said Carol Fitzgerald, President of the Hollywood Women’s Club. Over the last 4 years the Holiday Flocking Promotion has raised close to $5000 to support community service projects. To arrange a flocking,  call Head Flamingo Trish McGee at the Flocking Hotline, 954-609-6625.

The Hollywood Women’s Club, founded in 1922, is celebrating its 95th Anniversary of continuous service to the community. Known for its ability to react to community need quickly, the Club is a 501©3 tax exempt organization with over 100 members providing well over 7000 volunteer hours annually.  Their Clubhouse was built in 1927 and is not only home to the Club but is available for rentals for family or business parties, gatherings, baby and bridal showers, weddings and other events. For more information contact Cynthia at 732-299-4785 or visit www.hollywoodwomensclub.org.