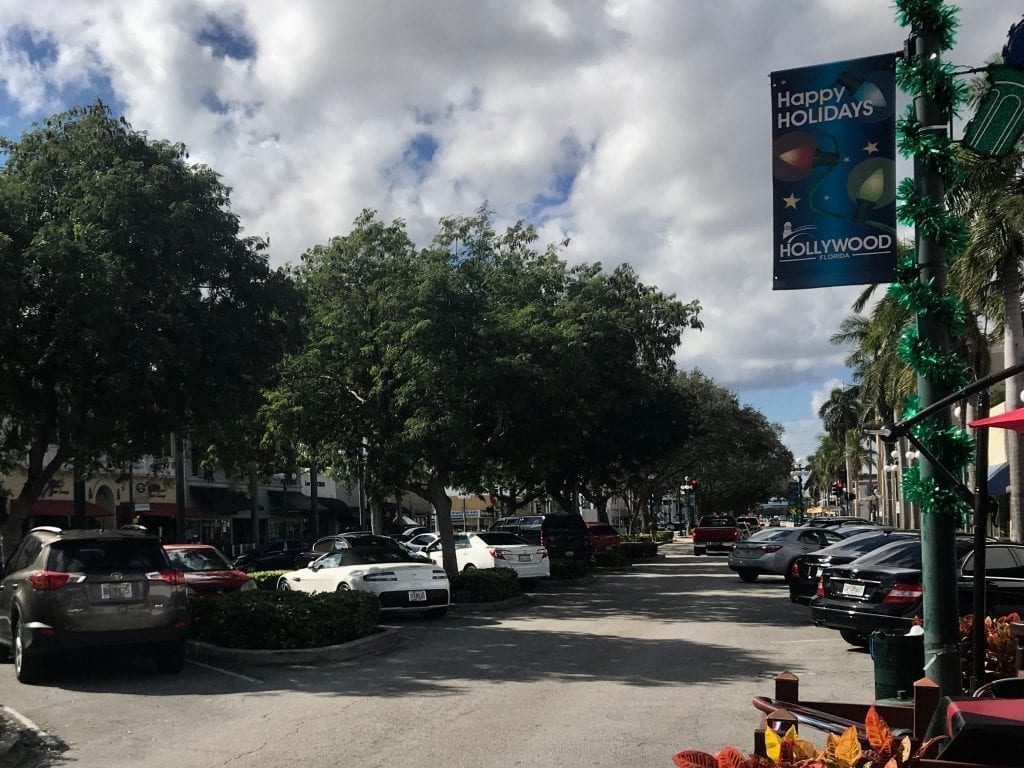 Three days into the return of on-street metered parking in downtown Hollywood and local merchants have mixed emotions.

The return of meters after five years of free parking was decided upon in an effort to increase parking turnover and improve the availability of spots for customers. The cost to park at one of the over-500 metered on-street spaces is $1.50 per hour, while the parking fee at both the downtown garages will be $1.00 per hour to accommodate those parking for a longer duration.  And it’s still not so easy to find a spot on Hollywood Boulevard.

Some downtown business owners and managers believe that neighboring employees are using the street parking, moving their cars one block every three hours to comply with parking regulations, making on-street parking unavailable for clients when they arrive.

“I’ve seen the street fill up with office employees as early as 9 am,” said Kimberly Longmire, owner of Hair Industry on Harrison Street.  “When my clients arrive at 9:15, they have nowhere to park.  At that time of day, who else could it be?”

Longmire, who has owned her business downtown for over 15 years and is very involved in the community, said that she contacted the government in downtown Delray Beach and learned that they’re in the same situation as Hollywood.   Delray is planning to begin charging for parking as well, she said, and they also see employee parking as the culprit.

But not everyone agrees.

Rosie Saubidet, a manager at Whiskey Tango, refutes the idea of her employees taking up the street parking.

“Our employees can’t be running out every three hours to move their cars, so they usually do put them in the garage,” she stated.  “I’m not sure why everyone is blaming them.”

Saubidet is concerned that she’s going to have a lot of unhappy customers going forward.  For now, though, she says what she’s seeing is a lot of confusion.

“I have a lot of people calling here, calling the city, the signs are still up, then they see the meters, and everyone here is afraid, because it’s absolutely going to affect the business.”

Consumers on the whole are not happy with the new charges.

“It’s going to take more time to get out of the car, pay, put the ticket back and go than it would take to just run in and get a pizza,” grumbled one man, who said his name was Julio.  “And look at these signs!  How are you supposed to know what the rules are, anyway?”

Over on Tyler Street, Southern Spice owner and downtown resident Natosha Gonzales thinks it’s just too early in the development of the city to take away the free parking perk from potential customers as well as people who live and work in the area.

“I’m disappointed,”  she said.  “I understand that it generates revenue for the city, but I wish they would have waited.  Visitors loved it and it was definitely a draw for people coming here from other areas.”

Along with the mixed emotions are mixed predictions of how the new charges will affect downtown businesses.

“The city gave us free parking for five years, which a lot of places simply cannot afford, and that was very generous, ” said Hair Industry’s Longmire.  “We’re hoping it won’t be a deterrent.”

“Hopefully, we won’t lose any business, but we probably will.”

The on-street meters will accept coins, bills, credit cards and you will also have the option to pay using the Parkmobile App. The meters will be enforced 24 hours a day, 7 days a week. There is no need to display a receipt on your dashboard, Parking Enforcement Officers will know your vehicle is paid because all license plates paid via the multi-space meter or the Parkmobile App are transferred to the Officer’s handheld device that shows the vehicle has been paid.  There are still a  few single-space meters downtown that accept coins and credit cards, as well as the Parkmobile app.

Resident or employee permits are not allowed in metered spaces downtown, except where marked on 21st Avenue.

For more information on the Parkmobile App or instructions on how to use the Pay-By-Plate Meters visit the Parking Division webpage here: http://www.hollywoodfl.org/96/Parking