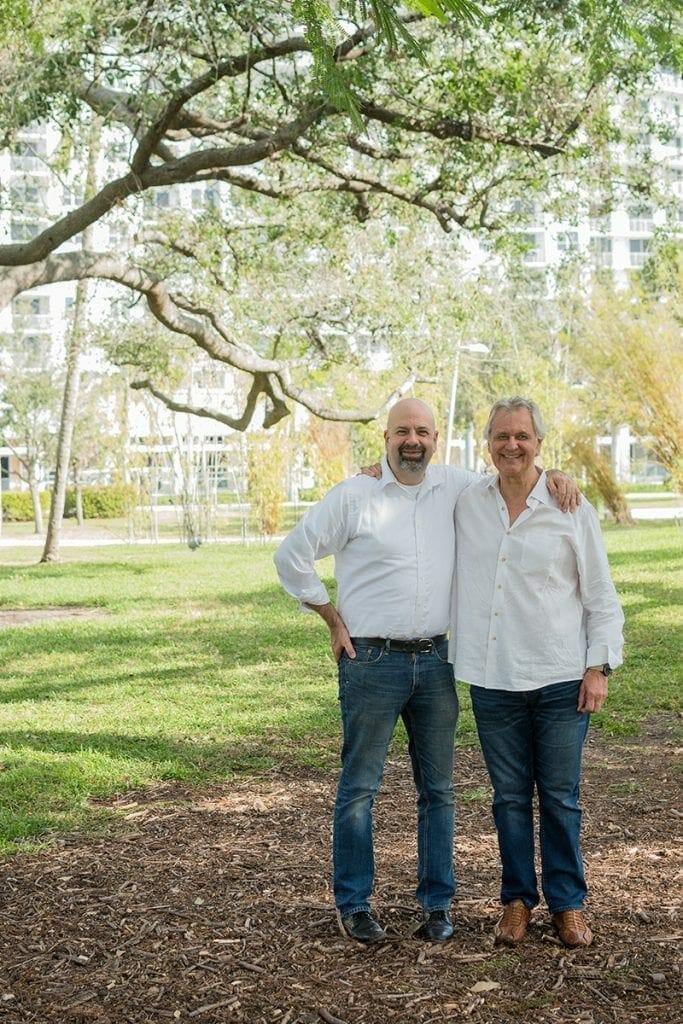 So a Rabbi and a Pastor walked into a cafe for a casual lunch and… sorry, no joke here.  What was born was a unique partnership. The dynamic duo, dubbed the “God Squad” of Hollywood began working on a project to made a difference for, indeed saved the lives of, dozens of AIDS-affected orphans in Haiti. And 12 years later, they continue to bring joy, healing and awareness to many residents of Hollywood as well.

Hollywood CARES (Caribbean AIDS Relief, Education, and Support) For Haiti is the brainchild of Rabbi Allan C. Tuffs of Temple Beth El of Hollywood and Kennedy McGowan, a Presbyterian minister and the Pastor of the First Presbyterian Church of Hollywood.  When I ask about the beginnings of the organization, Rabbi Tuffs says, “let me tell you instead about our friendship.”

Rabbi Tuffs, long established in Hollywood, customarily would reach out to new clergy as they came to the community. He called the church to set up a lunch date with the newly-arrived Pastor McGowan.

Around that time, there was a growing awareness of the world AIDS crisis, and concern about the epidemic was just one of the things that united the Rabbi and the Pastor. “We hit it off,” said the Rabbi.  “We decided we liked hanging out together right away,” the Pastor agreed.

That was more than a dozen years ago. Today, the two local religious leaders finish each other’s sentences and showed up for a photo shoot in unplanned identical outfits.

“Our church leaders had gone to a conference that had discussed the international AIDS crisis,” Pastor McGowan explained, “and we were struggling about what we could do.  Rabbi and I had already developed a friendship when we got a call from one of my staff members, who told us that a neighbor of hers was photographing a series on the AIDS crisis in Haiti  — and that neighbor happened to be a member of Temple Beth El!

In their first meeting, they said “Haiti is so close, let’s just go there” and so they went.

“And while we were there,” said Sharon Tanenhaus, who was Chairperson of the Social Action Committee at the temple at that time and now serves as the third president of Hollywood Cares about Haiti, after Tuffs and McGowan. “We just started saying ‘next time we’re here.’  And we’ve been back many many times since.”

But back to that first trip.  With photographer Mike as their guide, and accompanied by Aaron Jackson, a local young man and activist who was one the people featured in the newspaper series, they visited several orphanages for HIV and HIV-orphaned kids and agreed that one stood out.

The Project Papillon Orphanage in Port au Prince appeared to be run much better than many of the others they had seen on their tour, and was managed by a partner of Aaron’s named John Dieubon.  “Which is kind of a cool name anyway,” interjected McGowan, “It means Good God in French.”

The Project Papillon children are very well cared for, going to school, and enjoying a stable and loving environment.

“John was just somebody we had a huge amount of respect for, for his integrity and his commitment to the kids, and as our project developed, it became exclusively with John,” continued Tuffs.

“So on that trip we sat down with John, and we asked him, ‘What are your needs?  We make no promises, we have no resources, but tell us.”  What he had, he said, were 8 kids who had HIV mixed in with the general population of his 30 orphans, and they really needed their own house.

“Because it’s so cheap to rent a house and get help there, by the time we left on that first trip we had committed to two years of setting up a house, staff, food, care and education, it was a total $24,000 commitment, and we said when we get home, we’ll hustle to get the money.”

“What was amazing,” continued McGowan, “was, when we got back, well, at our church, we started talking it up, we were gearing it up toward an Easter offering, well, one member came the next day and offered to match what we raised up to $12,000!  And we raised the $12,000, plus between the church and the temple about 50% more, so we had over $30,000 including the match, and we were up and running.”

Then the Rabbi and the Pastor were off and running too.

“We got money from the Union for Reform Judaism, about $40,000 in total over the years.”

“And the Presbyterian Church gave money after the hurricane.”

“And the earthquake in 2010 brought in more people, when everyone wanted to help Haiti, we probably got another $100,000!”

In the decade since the kick-off of Hollywood CARES for Haiti, the organization’s achievements have been impressive and impactful.  A contingent of leaders and congregants have continued to visit Haiti several times a year.   They’re often accompanied by doctors, dentists and members of both congregations who each pay their own way and give up the majority of their luggage allowance to carry much needed clothing, computers and supplies for the kids and the programs.  Everyone who participates in Hollywood CARES is a volunteer and all money donated goes directly to the programs.

Lots of teens from both congregations have made the trip, some more than once.

“We’ve had quite a few kids go with us over the years,” said Tanenhaus. “Two sisters who are members of the temple, Helen and Anna Budowsky, have traveled with us multiple times and focused their mitzvah projects on Project Papillon when they were preparing for their Bat Mitzvahs. Helen’s project was a vertical garden for the kids to grow their own vegetables where the ground wasn’t good for planting, and Anna gave each of the kids their own digital cameras because they were so fascinated by our cameras and the photos we took when we were there, thus enabling each of them to express themselves individually. Another teen, church member Zak Myers, who has also been to Haiti with us multiple times and is still active with us, made it his Eagle Scout project to bring solar energy to the community center.  Other teens have come from as far as Texas and Massachusetts to join us.

“Over the years we’ve come to know the kids and they know us, and we’ve really become a great extended family.”

Hollywood CARES gets some of its financial support through grants and donations – contributing to rent, school tuition, dental care, new shoes and sneakers each winter, clothing, musical instruments, computers, a diesel generator, a 15 passenger van, and most recently, solar panels for Project Papillon’s Community Center which opened in 2010, and a fully-funded college education for every one of the kids, thanks to one very generous Hollywood CARES donor.

The organization has been the recipient of the 2009 Irving J. Fain Award. Given by Religious Action Center (social justice arm of Union for Reform Judaism) the Award honors URJ congregations for exemplary social justice work.  It has also received Grants from the Sam Roosth Foundation in 2014 & 2015, given to non-profit organizations for philanthropic purposes, and from URJ & Presbyterian USA, which paid for the generator and the van.

“But most of our funding over the years has come via donations from individuals,” reiterated Tanenhaus.  “A few have been quite substantial but for the most part, we depend on smaller donations from people who like what we do.

“Until last year, the only fundraising events we held were the yearly concerts we call Hollywood Healing Haiti at the ArtsPark, which began after the 2010 earthquake in Haiti. Last year, we added a 5K race in April, which was so successful for a first run that we decided to make it an annual event; our second 5K will take place on the Hollywood Broadwalk on April 29, 2018.

This year’s family-friendly Hollywood Healing Haiti concert and arts fair will take place on Sunday, January 28, 2018 from 1 -5 pm at the Young Circle ArtsPark in Downtown Hollywood.  Tanenhaus reported good  fundraising results at the free event through donations and sponsorships along with sales of raffles, t-shirts  and some artwork.

Rabbi Tuffs has been at Temple Beth El for twenty years and lives with his wife in the neighborhood.  Pastor McGowan has been at First Presbyterian for about 13 years (?) and lives with his wife and young son in Plantation.  They have each served as both president and vice president of Hollywood CARES, retain positions on our Board of Directors and have President Emeritus status.

“But what has been so special about Hollywood CARES for Haiti and these past 11 years is that it isn’t just about the two men who had the first conversation, but what they envisioned and how they motivated us to go along with them,” explained Tanenhaus.  “Beyond that first conversation, it has not been a two-man enterprise. Over the years, we’ve grown into a larger group, all of whom work very hard for the success we’ve had and, hopefully, will continue to have for a long time to come. We never forget, though, how they brought us to be.”

“We are dedicated to serving the orphans, endangered children, and youth of Haiti by supporting Project Papillon in an effort to help each child reach their potential and hopefully one day build a stronger Haiti.”

So says the mission statement of Hollywood CARES.

“Some of these kids were little when we first met them, now they’re teenagers and they’re getting ready to go out in the world themselves,” noted the Rabbi.   “And that’s the whole idea.  That’s the way Haiti will get rebuilt. “

“We have seen how this work has changed lives, both the lives of the children we serve (many of whom might have died without this mission), and the lives of the many folks who have visited Haiti to see the mission, and work with our partners there,” added the Pastor.  “Everyone who has gone to Haiti on one of our many trips there has returned profoundly changed, and many have returned year after year to see the work move forward.”