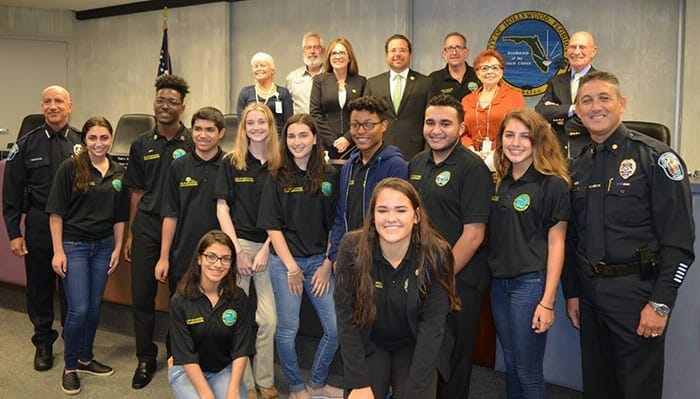 Students are the leaders of tomorrow

Members of the City of Hollywood Youth Ambassadors Program were the 1st Place Winner of the 2017 Municipal Youth Council Video Competition.  My City Hollywood: I’m Part of It, I’m Proud of It competed against submissions from multiple Florida cities to win the coveted number one ranking.

“The City of Hollywood Youth Ambassadors Program provides an opportunity for the younger population to understand the ins and outs of local government,” said City of Hollywood Commissioner Traci Callari. “We are so proud and honored to shine the spotlight on these students who worked collaboratively to meet the challenges of the competition and win first place.”

The youth council video competition required councils to promote Florida City Government Week locally, or recognize the work its city does. The goal was to raise public awareness about the services that cities perform, and to educate the public about how city government works. The competition provided youth ambassadors a way to showcase their ideas and creativity to promote Florida City Week. Students were encouraged to use social media to promote events using #FLcityweek.

Describing the greatest impact of the experience, Amanda Alvarez, City of Hollywood Youth Ambassador and 12th grade student at South Broward High School, explained, “The competition helped us gain a great appreciation for the City of Hollywood.  Many parts came together to produce the video and write the essay.  We have a better understanding of how the Mayor’s office, city commissioners and law enforcement work together and how we can be better citizens.”

About the Hollywood Youth Ambassador Program:

The goal of the City of Hollywood’s Youth Ambassador Program is to foster open and positive communication between city government, law enforcement, and the youth of the community. Students serve as liaisons and discuss youth related issues that impact the school and the community.

The ambassadors are a diverse group of students who reside in Hollywood and attend a high school located in the city. Students partner with the Hollywood Police Department, the office of the Mayor and City Commissioners and the Broward School Board.

The 60-second public service announcement created by the student highlighted the best in the community, focusing on how Hollywood City Government and the Hollywood Police Department worked together to recover after Hurricane Irma. In addition to the video, students included an essay/action plan and letters from Hollywood Mayor Josh Levy, city of Hollywood Commissioners and Police Chief Tomas Sanchez,

“We are very proud to be working with such passionate, dedicated and hardworking young adults,” said Lieutenant Selina Hightower of the Hollywood Police Department. “The students are hand selected from many applicants. Working alongside law enforcement gives them a different perspective.”

Four other youth councils, from Sanford, West Palm Beach, Dade and Titusville, were also recognized for their submissions.