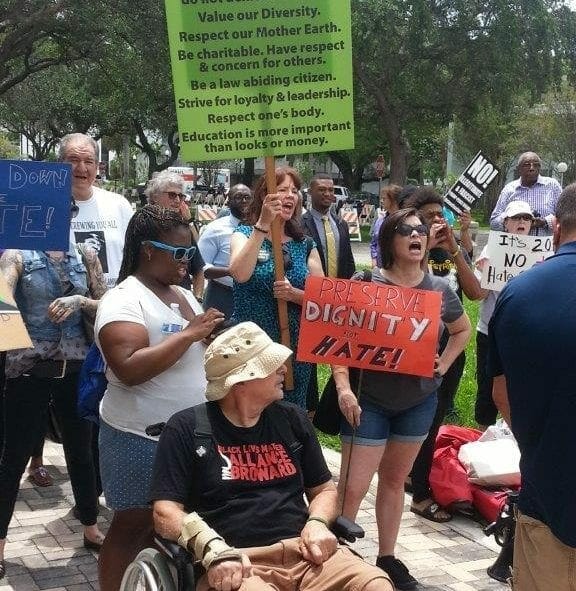 The saga of the street signs named for Confederate generals continues in the City of Hollywood.

The City expects to have the final quote for the street sign replacement by early February.   At this point, the amount for the entire job is anticipated to come in at between $20,000 and $30,000.

Once this has been invoiced and paid, the sign replacement process will begin:  All signs must be approved by Broward County,  fabricated and installed.

Also, once payment has been made and the replacement process scheduled, a letter will be sent to those property owners living on the affected streets with instructions on what documents they will need to have changed, according to Joann Hussey, spokesperson for the City of Hollywood.

One of the main questions now is still who is going to pay for the new signs and the labor involved in changing them. And the city is turning to activists  Linda Anderson and Laurie Schecter, who formally petitioned the city to rename the signs, to foot the bill. Anderson, president of the Liberia Civic Association, says most residents in her predominantly black neighborhood are in favor of the new names.

The 156 signs slated for replacement are all of those on Lee, Hood, and Forrest Streets.

“Honoring Confederate figures who led the fight to uphold the evil institution of slavery cuts against the very values we treasure today and stands at odds against who we are as residents of Broward County and as Americans,” said Broward Sheriff Scott Israel.

According to city policy, as it stands right now, it is the responsibility of the people who petitioned for the change.  Benjamin Israel, one of the petitioners, believes that the city, who voted 5-2 in favor of the change in November of 2017, should follow through and pay for it.

While it is not shown to be on the agenda for the next City Commission meeting, the question of the sign expense is expected to come up soon.