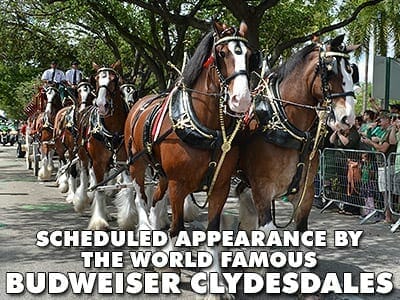 Drink some green beer, eat some corned beef and cabbage and kiss the Blarney Stone on March 11 in Downtown Hollywood when the City of Hollywood, Hibernians of Hollywood and the Community Redevelopment Agency host the annual St. Patrick’s Day Parade & Festival, a free celebration of “all things Irish,”  in downtown Hollywood from noon to 6 pm.

This free celebration of all things Irish begins at noon, and the parade begins at 1 pm.  The parade will travel east on Hollywood Boulevard from 21 Avenue to Young Circle and return on Harrison Street.  Radio personality Footy will emcee the parade, which will feature dozens of floats, local marching bands and spectacular bagpipe and drum corps including the famous New York Police Department Emerald Society Pipe and Drum Corps.  The Parade Grand Marshal this year is James Lawless.

Anniversary Park will go green and transform into the “Magic of the Emerald Isle,” a children’s activity area featuring games and crafts for youngsters of all ages.  And there will be a special appearance of the Budweiser Clydesdale Horses!  The Commission approved a special exception to allow the participation of the horses in the parade.

The line-up of traditional Irish entertainment, including Joe Dougherty, Celtic Bridge, and UV the U2 Tribute Show, will take place on the stage at 19 Avenue and Hollywood Boulevard.
Downtown Hollywood restaurants will be offering festival specials including Irish favorites like Corned Beef & Cabbage, Shepherd’s Pie and green-colored drinks!
$10 event parking in City-operated garages and additional parking will be available in marked lots throughout downtown. There will be a designated Uber and Lyft drop off/pick up area will be at the Bank of America building at 1900 Tyler Street.
For more event information please visit www.stpatricksparade.com.
Stay Connected
Like Us On Facebook
Follow Us On Twitter
Newsletter