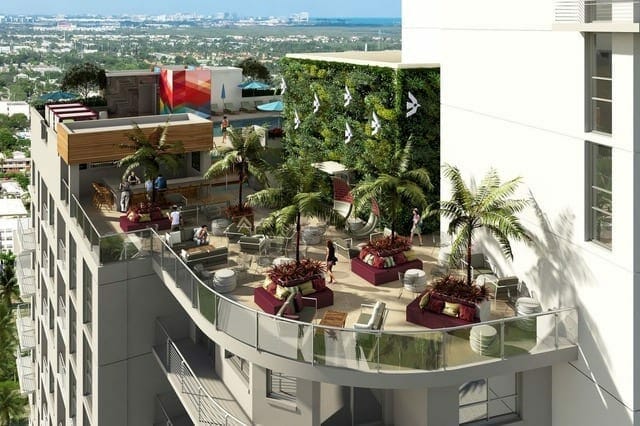 When you look to the Northeast from Young Circle, at the tall new white towers risen like a phoenix from the ashes of the eyesore Townhouse tenement, you almost can’t remember what it looked like before the implosion.  Now, with traffic from the new Publix bustling and the anticipation of the new hotel, apartments and restaurants, it’s likely that this multi-use property will do for downtown what Margaritaville did for Hollywood Beach.

And that’s not all, said Chip Abel, Chairman and Chief Executive Officer of Gold Coast Florida Regional Center, LLC, the parent company of Hollywood Circle, owner of the property.

“Downtown Hollywood has experienced tremendous progress over the past few years. Hollywood Circle reinforces our commitment to the City’s growth today, and into the future. We anticipate being a major contributor to Hollywood as an in-demand destination for years to come.”

Gold Coast is indeed committed to the city’s growth.  The company began assembling the development site in 2001, and bought 24 parcels to assemble the site, including the old Greyhound Bus terminal, four small apartment buildings, two gas stations, a drive-in pizza shop, a vacant lot, a parking lot, and the 12-story Townhouse Apartments.

In addition, the company has purchased the long-vacant Great Southern Hotel on the Southwest corner of the circle.  Currently called the Block 40 project,  it will eventually be a 19-story, mixed-use property with a Hilton Garden Inn, residential units and nearly 10,000 square feet of retail and office space in the historic site.

“To preserve its historic significance,” he continued, “we will incorporate the Great Southern’s façade and an interior portion of the hotel into our finished product. We believe it will attract locals and visitors alike and play a major role in Downtown Hollywood’s continued resurgence.”

The CIRC Hotel, Residences, and restaurants are all set to open in the first week of May, according to hotel General Manager Kara Lundgren.  A grand circular entryway on Polk street just east of Federal welcomes guests to the residences and Hotel, with a covered walkway uniting the two.  The 111 room hotel and 386 unit apartment building each offer beautifully appointed dwellings of varied sizes for both residents and visitors. The hotel and restaurant offer state-of-the-art kitchen facilities and meeting and convention rooms to accommodate groups of all sizes.  But it’s the bar and restaurants that are destined to enchant the locals along with the tourists.

When you enter Olivia, the 5000 square foot eatery with several doors directly onto the street as well as from the hotel lobby, you’ll be whisked away to Sicily, with a distinctly Americano twist.   The restaurant offers a huge Mozzarella bar, with seemingly limitless antipasti combinations, a wine cellar with an impeccably curated wine list, private rooms and menus to take you from breakfast to late night. The hotel also features Presto Coffee House, a takeaway coffee bar right off the Circle.  The decor is, in a word, spectacular.

The pièce de résistance, though, is the roof deck restaurant and bar, The Muse Rooftop Lounge.  The menu of Little Bites, Sushi and Desserts entices, and complements a full bar.  But it all pales next to the main attraction, (sorry, Chef,) the view. Nowhere else can one experience a 360° view of South Florida like the one from here.  You can see it from far up Hollywood Boulevard, and you can see just about all of South Florida from there.  From ocean to the East, to the sunsets out West, from Miami to Fort Lauderdale, you’ll have the incomparable feeling of being on top of the world.