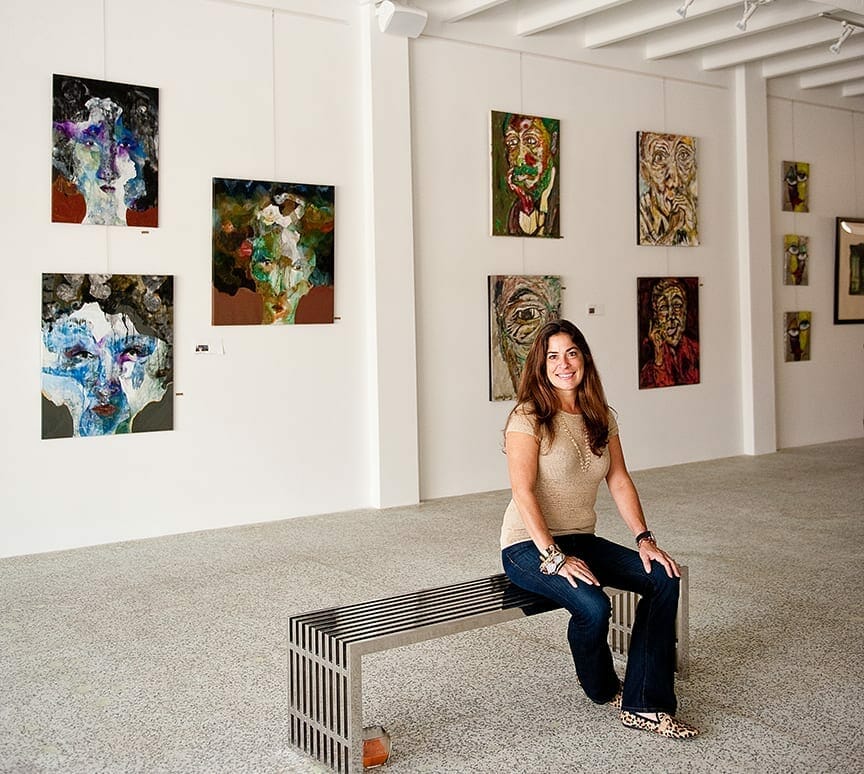 Elizabeth Sanjuan is no stranger to getting what she wants. Fifteen years ago, the Hollywood native noticed a handsome man on a plane, but couldn’t catch his eye. She later tracked him down and asked him out. That man, Ken Brown, is now her husband.

With their Gallery 2014 on Harrison Street, owned and operated by the Sanjuan-Brown Hollywood Arts Foundation, Inc., the couple has assisted a host of local artists and promoted their mission to create global awareness, provide access and promote fairness through the arts.

Over the years, Sanjuan has won many accolades and awards, including honors by Hispanic Unity, the March of Dimes, Hispanic Women of Distinction, Healthy Mothers Healthy Babies, and as the Hollywood Chamber of Commerce Business Woman of the Year. Most recently, she and Brown were feted at the Art and Culture Center/Hollywood’s 10th anniversary Hot Hollywood Glam event, which netted over $27,000 for the Center’s arts.

Now, almost inconceivably, the couple is leaving Hollywood, moving their home (just a little bit) north to Delray Beach and, by the time you read this, closing the brick and mortar form of the Gallery (except by appointment). Of course, Hollywood is, she said, in her blood. And she will not disappear.

Call it her last hurrah, or her farewell to the city she loves so much, but Sanjuan is not one to go out like a soft low tide… especially not one that leaves any trash on the shoreline. Instead, she is thrilled to report that a project she’s worked diligently on for the past five years, banning the use of styrofoam and other beach and ocean pollutants east of the Intracoastal in Hollywood, has finally come to fruition.

“I was always environmentally conscious,” explained Sanjuan, citing a middle-school science teacher here in Hollywood that introduced her to the concept. “When my daughter was younger, we used to walk along the lakefront at South Lake, and once a month we would bring a bag and pick up the trash.

“At one point, I called the city, and said ‘Hey, I’ve been cleaning the lakefront, and you really need to do it.’ And they said “Our guys won’t do it; they’re afraid of water. But you can’t do it either, it’s a liability to the city.’

“So I wrote to the city manager at the time, and he gave my daughter a little Citizenship award.”

Which was very nice but did nothing toward solving the problem.

“Flash forward to 2012,” she continued. “My husband and I started walking on the beach and we started noticing the huge amount of garbage at the shoreline. So I started cleaning. I started making videos. One day we took a 6×6 foot wood board and hot-glued all the debris we collected over five days time. Plastic straws, voodoo dolls, hypodermic needles. We presented it to Cathy Swanson-Rivenbark, who was now the city manager and said, this is the uncollected debris.

“Now, the city has a pole which they drag along by a tractor to clean the sand, and all it does is sweep the sand and bury all the crap left over. It, in essence, creates a landfill. So I presented to them a rake system, which is basically the same but it leaves the sand and picks up the stuff. All the other counties and cities use them. I gave them the information, the prices, the other cities that use them, but to my lament, they’re still using the pole system. I have not been able to accomplish that.”Lightning struck for Sanjuan when she learned that there was, and had been, a ban on the books against styrofoam and plastic east of the Intracoastal in Hollywood for over 26 years. So, after over five years of attending meetings, speaking up, and not really getting anywhere, she hired an attorney and presented the city with possible litigation if they didn’t enforce the code.

“I’m like a dog with a bone,” laughed Sanjuan. Like I said, she’s used to getting what she wants.

With her attorney, she continued to work, through three city attorneys, and finally, current city attorney Doug Gonzalez asked for documentation from the state and the EPA, which Sanjuan and her attorney were able to provide. Then the state of Florida stepped in with a proposed new ordinance which included prohibiting cities from putting bans on plastics.

With the help of Commissioner Traci Callari, Sanjuan and the commission were able to come up with a creative solution that protected the “grandfathered” ordinance.

“The new laws were only banning styrofoam,” she explained, “while the old one includes everything — straws, plastics utensils, flyaway paper napkins and more. And fining the end user was part of the new proposal! We were able to provide the tools needed to enforce the old ordinance.”

A newspaper article at the time had reported that most of the restaurants queried on the beach were in favor of moving towards more eco-friendly products. Sanjuan proactively researched and distributed a three-page document to help the restaurants with their transition. She included information on products with cost analyses, samples, spreadsheets, suggestions on making the community aware of the changes and the environmental impact, websites for info, and more.

“Luckily,” she added, “California had already been through a similar change, so the information was easily available. “ She noted that most products are obtainable for approximately the same cost as the less environmentally friendly alternatives.

The restaurants have been given a several month grace period to make the transition, and the new rules should be enforceable by summer. They will be monitored by Hollywood code enforcement.

Next, Sanjuan reached out to Catherine Uden, chair of the Broward County chapter of the Surfrider Foundation, a non-profit grassroots organization dedicated to the protection and enjoyment of our world’s oceans, waves, and beaches, and they planned their collaboration.

“I asked her to get involved, attend the meetings, write to the commissioners,” she said.

Surfrider had, a few years ago, spearheaded the “Ocean Friendly Restaurant Program” (OFR) in California, and had enrolled hundreds of restaurants in Hawaii and California.

“OFR was started by the San Diego chapter of Surfrider in 2015,” noted Uden. “It is just getting underway in Florida and I’m happy that Hollywood is leading the way. We really appreciate all of the support we’ve had from ocean minded people, including Elizabeth.”

To earn the OFR Certification, restaurants must agree to a stringent set of criteria.  Restaurants participating must follow the first four criteria:

1. No expanded polystyrene use (aka Styrofoam).

3. Only reusable tableware is used for onsite dining, and disposable utensils for takeout food are provided only upon request.

4. No plastic bags offered for takeout or to-go orders.

And choose a minimum of three of these criteria as well:

5. Plastic straws are provided only upon request.

6. No beverages sold in plastic bottles.

7. Discount is offered for customers with a reusable cup, mug, bag, etc.

8. Vegetarian/vegan food options are offered on a regular basis; and/or all seafood must be a ‘Best Choice’ or ‘Good Alternative’ as defined by Seafood Watch or certified as sustainable.

9. Water conservation efforts, such as low-flow faucets and toilets, are implemented.

10. Energy efficiency efforts such as LED lighting and Energy Star appliances are in place.

“All these criteria are in the ordinance,” observed Sanjuan. “All the restaurants will have to follow them anyway.”

The Surfrider team sprung into action and has already registered two Hollywood Broadwalk restaurants, CAFE CLUB by Les Artistes and Ocean Alley, into the program. And there are more to come. The Surfrider team continues to carry out Sanjuan’s objective.

“So,” said Sanjuan, “after five years and ten thousand dollars, the commissioners finally came around. And they said that if our city attorney has the collateral to back it up, we are good.”

In parting, Elizabeth Sanjuan has two messages for the City of Hollywood.

“I hope the city of Hollywood continues to do the right thing by the citizens and the environment. And

My last wish is to Get Rid of the Poles and Use the Rake System!

Hollywood thanks Elizabeth Sanjuan and Ken Brown for their many years of selfless service and wishes them luck in their next endeavors — and we know we’ll see them again.