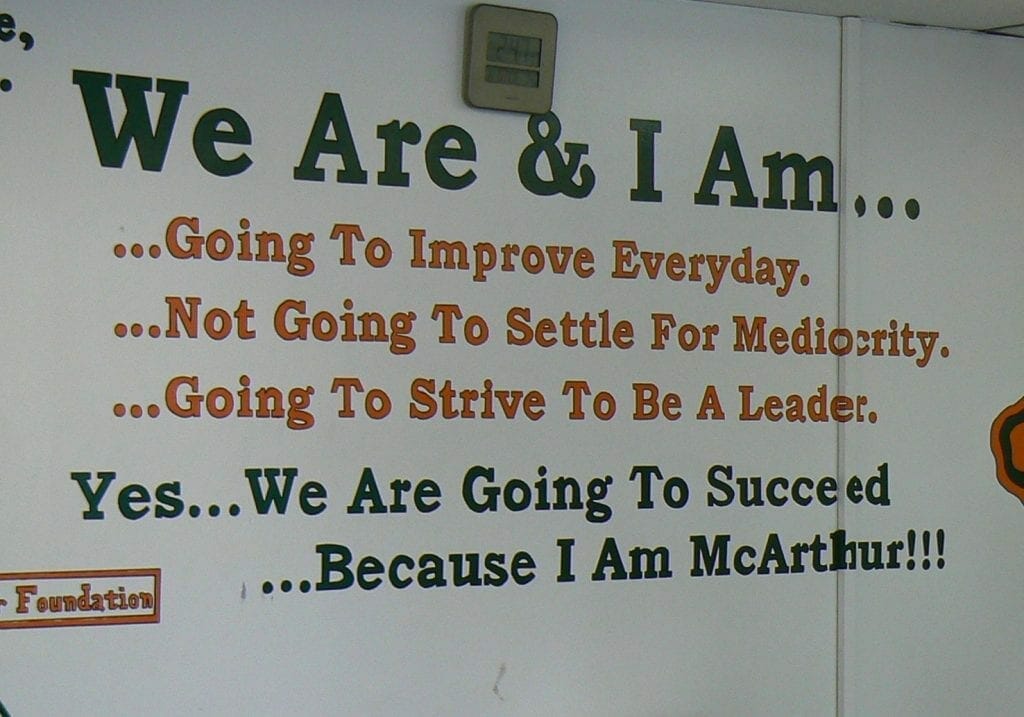 Following one of the nation’s most deadly mass shootings, students and victims at Marjory Stoneman Douglas High School in Parkland have received an outpouring of support from people across the country.

Of course, the MSD massacre has had an especially significant impact on other Broward County schools.

Reactions to the shooting have been a strong unifying force at my school, McArthur High School in Hollywood.

In addition to donating supplies, McA Speech and Debate sent handwritten “cards of encouragement” to MSD for students and teachers to hang on their walls.

Students participating in the national walkout on March 14 assembled in a heart shape on the football field.

On Feb 21, Senior Antonio Rios organized a schoolwide protest.   Students came to school adorned in burgundy, black, and silver to honor those lost, and stand with MSD students, faculty, and staff.

Antonio said he is “fed up with the fact that they [school shootings] are happening in the U.S. consistently. It’s quite simple what we should do,” he said, calling for increased gun control.

Antonio’s main goal at McA is to inform students about gun control. In the future, he plans to become an activist and run for office to directly affect change.

Senior Catherine Munguia attended the March for Our Lives in Parkland to support the cause for increased gun control.

“It felt very empowering but also just a first step in many to come in this long battle against the lack of regulations,” said Catherine.

As many of these students approach voting age, they look forward to making real changes in the future.

“When I turn 18 in November, I plan to vote for candidates who support increased gun control,” said junior Maribel Almonte.

(Editor’s note: McArthur was chosen as one of about 15 high schools to participate in a county-wide voter-registration initiative.  Juniors and seniors were able to register to vote in school, and students who are 16 were able to pre-register at the same time.  Over 150 new voters were registered at the drive. )

McA administration, faculty, and staff, as at many schools, are increasing immediate safety measures.

Already, teachers are required to keep doors locked and all students must wear identification cards.

“I think we now have a heightened sense of security,” said math teacher and dance coach Ingrid Clarke.

After the shooting, we were all scared to come to school. It wasn’t that we were less safe but rather the understanding that we were never quite safe at all. The possibility of there being a shooting on our campus suddenly became very real. Someone could enter the campus with an assault rifle at any moment with the intent of indiscriminately killing as many as possible.

“Every day it was a new project to do during lunch to show our support,” recalled student Salma Moran. “Nowadays, students continue to show support and remember their protests on campus with pride. I remember holding my camera through the fence to showcase our Mustang pride as we protested on Pines Boulevard. I was overwhelmed and very proud,” she added.

Looking back just a few weeks, it’s clear that McArthur has grown in its awareness of national issues and attachment to the South Florida community, setting a precedent for future students to show compassion and become active citizens.