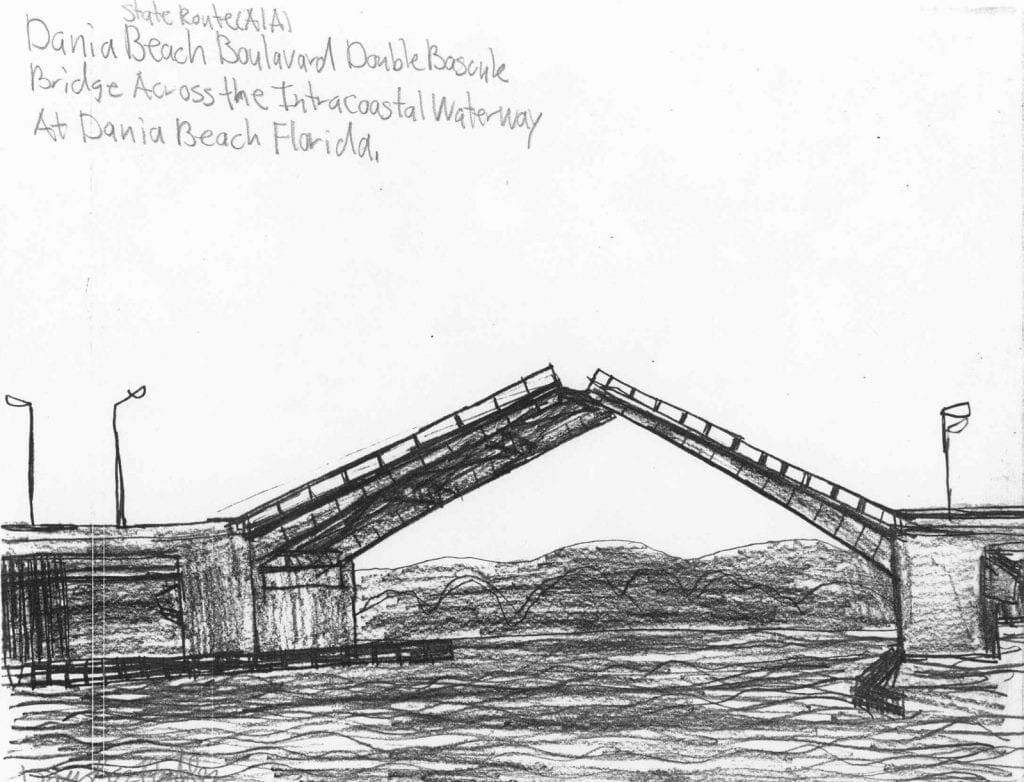 Old Whiskey Joe.  Ask any local old-timer and they’ll know exactly who you’re talking about.  That was the nickname given to the old salty dog, who homesteaded, some might argue squatted, with his son in what is now part of the Greater West Lake Park nature preserve.  They lived there, basically in the water, from the late ’50s to the late ’70s.

Their real names were Joe Wendell,  who was the original “old Whiskey Joe” and Howard Wendell, his son.  He made his home just north of the Dania Beach Blvd. bridge, on the mainland side of the Intracoastal Waterway in Hollywood. The location of their homestead, though often incorrectly identified as Dania, is actually still in Hollywood.

He landed there sometime in 1958, after being kicked off North Beach near Port Everglades, where he had been squatting for some time after being evicted from Ft. Lauderdale city docks.

Soon after his arrival in Hollywood, Joe started causing trouble.  According to a newspaper article from that year, there were numerous complaints of him shooting at people for getting too close to his homestead, where he lived on and his houseboat, the Miss Dorothy, along a deserted stretch of beach.  Ordered by a Hollywood judge to vacate,  he pulled up the anchor on the dilapidated houseboat and found his way to Whiskey Creek, a small creek west of the Intracoastal and just north of Dania Beach Blvd in Hollywood.

The move finished the Miss Dorothy, and she settled into the mud of the creek, signaling the end of her sailing life.

In the years that followed, Joe, Howard and Miss Dorothy accumulated a menagerie of animals, piles of junk, lean-to shacks and several more dilapidated boats.

Now, living in the swamps of West Lake with no electricity and no running water is not for the faint of heart.  As I, who grew up in East Dania, can attest, between the saltwater marsh mosquito and its more sinister buddy the dreaded sand flea, life outside between dusk and dawn is pretty much unbearable.  If you didn’t have A/C,  there was no escape from the pepper-sized sand fleas that could easily fly through your screens, and with a bite the size of Toledo, I’m not sure how Joe and Howard survived all those years without blood transfusions.

Some say that Old Whiskey Joe ran a mini junkyard on his “property”, allowing people to dump junk there for a fee.  To get to his homestead by land, you would travel East on Dania Beach Blvd in “Hollywood” and right before the bridge to the beach you would make a left to get to a rock road that runs east parallel to the bridge leading to the water.

It was along this road that people could get truckloads of junk into this area of part dry land/part swamp.

Local resident Clare Frost remembers visiting Whiskey Joe in the early ’60s with her father, Dink Frost. Dink was a local boat captain and ran the bait stand on the beach. He felt sorry for poor Joe and would sometimes stop by and visit, bringing food. Clare, who was just a child at the time, remembers visiting Joe with her father and recalled that he had a bathroom which consisted of a toilet on a dock over the creek with a hole underneath for easy disposal.

One could argue today that whiskey Joe was the original marine squatter.

Another old-time local told me that the move to the creek didn’t change Whiskey Joe’s attitude toward trespassers.  Back in the ’60s, while he was water skiing in the creek with his friends, he was shot at by Old Whiskey Joe!   I can’t imagine that kind of thing happening today without major consequences!

In 1978, We had just moved to Dania.  I was about 13 at the time and I didn’t know about the man under the bridge.  I was riding my mini bike down that dirt road when I was suddenly run off the road by a pack of dogs!  Apparently, I had trespassed onto his compound.  I had almost got to the end of that road when his pack of six unleashed dogs of varying sizes popped out of the mangroves and chased me the whole way out.

They immediately stopped at the bridge, as if they knew where the imaginary property line was.

There were many attempts over the years to evict old Joe, but like a mangrove root anchored in the mud, he was not easily uprooted.

Old Whiskey Joe passed away in 1978 without ever leaving the swamp he called home.

As for Howard, he continued just as his old man had, resisting efforts to move or vacate, and continued collecting more and more debris and animals.

His freewheeling off-the-grid lifestyle, as all good things, eventually came to an end.

It was the early ’80s when Hollywood Inc., the landholder at the time, needed to clear up the real estate title for the sale of the property to the county for the creation of West Lake Park.

Howard Wendell claimed he had “squatter’s rights” and he had a good case, but that would mean he would owe back taxes on the land.  He’d never paid taxes in his entire life and he wasn’t about to start now.

Once he finally vacated the land and moved on, the county had a real mess to clean up.   All that was left of the estate of Old Whiskey Joe, Howard and Miss Dorothy was a pile of batteries, old tires, metal scraps, cars and various objects of hard junk.

The only thing left on the homesite of these two renegade residents is the old rock road, which is now used by the county for access to the area.

Next time you travel down that part of Hollywood or pass over the Dania Beach Blvd. bridge glance over and think of Old Whiskey Joe and his family, and what kind of person it takes to reject society enough to tough it out in that kind of environment for so many years.