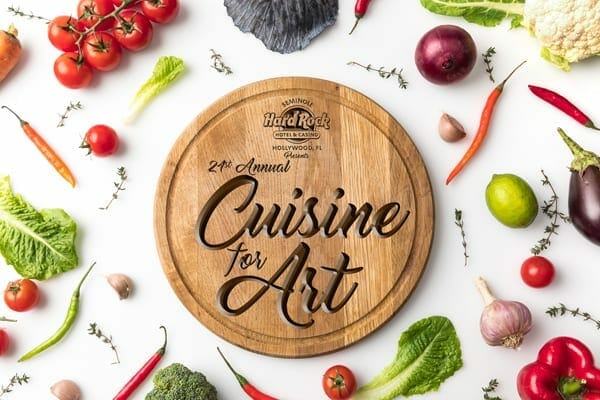 The Mayor of Broward County, the Mayor of Hollywood and just about the entire Hollywood Commission will be among the celebrities donning waiters’ aprons and taking your orders at Art and Culture Center/Hollywood’s 21st Annual Cuisine for Art fundraiser, taking place in the newly constructed Hard Rock Event Center at the Seminole Hard Rock Hotel & Casino on the evening of April 26.  The Center will be the first nonprofit to have an event in this new space!

Cuisine for Art will feature elected officials and community leaders serving as Celebrity Waiters during a sure-to-be-enjoyable evening which will include a three-course dinner, complimentary wine, beer, and vodka cocktails, live entertainment, and an awards presentation.

This year’s honoree is Ina Lee, the owner of TravelHost Magazine of Greater Fort Lauderdale.

The lineup of celebrity servers scheduled for the event are:

The entertainment should be loads of fun and will feature the Dale Powers Band; vocalist Maria DeCrescenzo, and back by popular demand, Michael Dean, who will delight the crowd with a special tribute performance as Cher. In addition, the Center will feature Rock With U Entertainment Emcee Ross, and DJ Slim Rock!

The Art and Culture Center/Hollywood is a 501(c)(3) non-profit organization supported in part by its members, admissions, private entities, the City of Hollywood; the Broward County Board of County Commissioners as recommended by the Broward Cultural Council; the State of Florida, Department of State, Division of Cultural Affairs, the Florida Council on Arts and Culture; the David and Francie Horvitz Family Foundation; and the Josephine S. Leiser Foundation. Donations are always welcome from all members of the community who wish to support the work of the Center.

The 21st Annual Cuisine for Art fundraiser is being held on Thursday, April 26, at the Hard Rock Event Center at the
Seminole Hard Rock Hotel & Casino.  Cocktails and auction begin at 6:30 pm, with dinner, entertainment, and the awards presentation following at 7:30. The Art and Culture Center/Hollywood is located at 1650 Harrison Street in Downtown Hollywood, FL 33020.  Its phone number is 954 921 3274, and its website is ArtAndCultureCenter.org

Click Here for more Information regarding the event or the Center.  Sponsorship opportunities for the event are still available as of this writing.