What was J. W. Young’s vision for Hollywood Beach when he first came here?  How did our city come to be? Come hear Hollywood Historical Society Resident Historian Dr. Joan Mickelson when she speaks on this topic on Sunday, April 15 at the Stirling Road Branch of the Broward County Library.

Joseph W. Young, Jr. first saw his future Hollywood beach in 1919 when it was simply golden sand dunes, with mangroves along the west side in the Inland Waterway, and the wide blue Atlantic ocean lapping the east side. Envisioning a future resort playground crowned with a majestic hotel to rival Flagler’s, Young bought the entire island, from the Hallandale border, eventually all the way to the northern tip at today’s Port Everglades. In 1922 he had the first paved paths on the island laid down, Johnson Street and the acclaimed Broadwalk. By 1925 the area from Sheridan to Washington Streets was laid out with streets, buildings had appeared, a permanent Boulevard Bridge was installed, and Young had achieved his dream of outdoing Flagler with his Beach Hotel, the largest hotel on the east coast at that time.

Then the mighty 1926 hurricane struck.

What were the sources stimulating Young’s vision of an island beach resort? And what remained after the 1926 hurricane? Dr. Mickelson will provide some answers, relying greatly on the wealth of astonishingly detailed historic photos from the Hollywood Historical Society and other collections.

Joan Mickelson is a Hollywood, Florida pioneer by birth. Her parents, Lamora and Tony Mickelson, both worked for J. W. Young’s Hollywood Land and Water Company. Her first trip to Hollywood beach was at the age of nine months, when her father waded out and dropped her into the ocean (she bobbed up). Other memories are of summer swim camps at the Casino pool — cold water at 8 am, but clear and salty. A graduate of South Broward High School, she also has a doctorate in history of art of the Modern period. For over thirty years she was a museum curator and then director, in both art and history museums. Upon retirement, she returned to work on the history of her home town.

Dr. Mickelson has served on the Board of Directors of the Hollywood Historical Society (as Secretary and Treasurer), which her mother helped to found in 1974, and written articles, a blog, and several books about Hollywood, Florida. Her awards include the Cooper Kirk Memorial Award from the Broward County Historical Commission, and from the City of Hollywood for Dedication to the Preserving the History of the City of Hollywood.

The April 15 lecture begins at 1 pm at the Stirling Road Library, 3151 Stirling Road, Hollywood 33312.   Parking is free and refreshments will be provided.

For more information, please contact the Hollywood Historical Society at hollywoodflhistory@att.net or 954-923-5590. 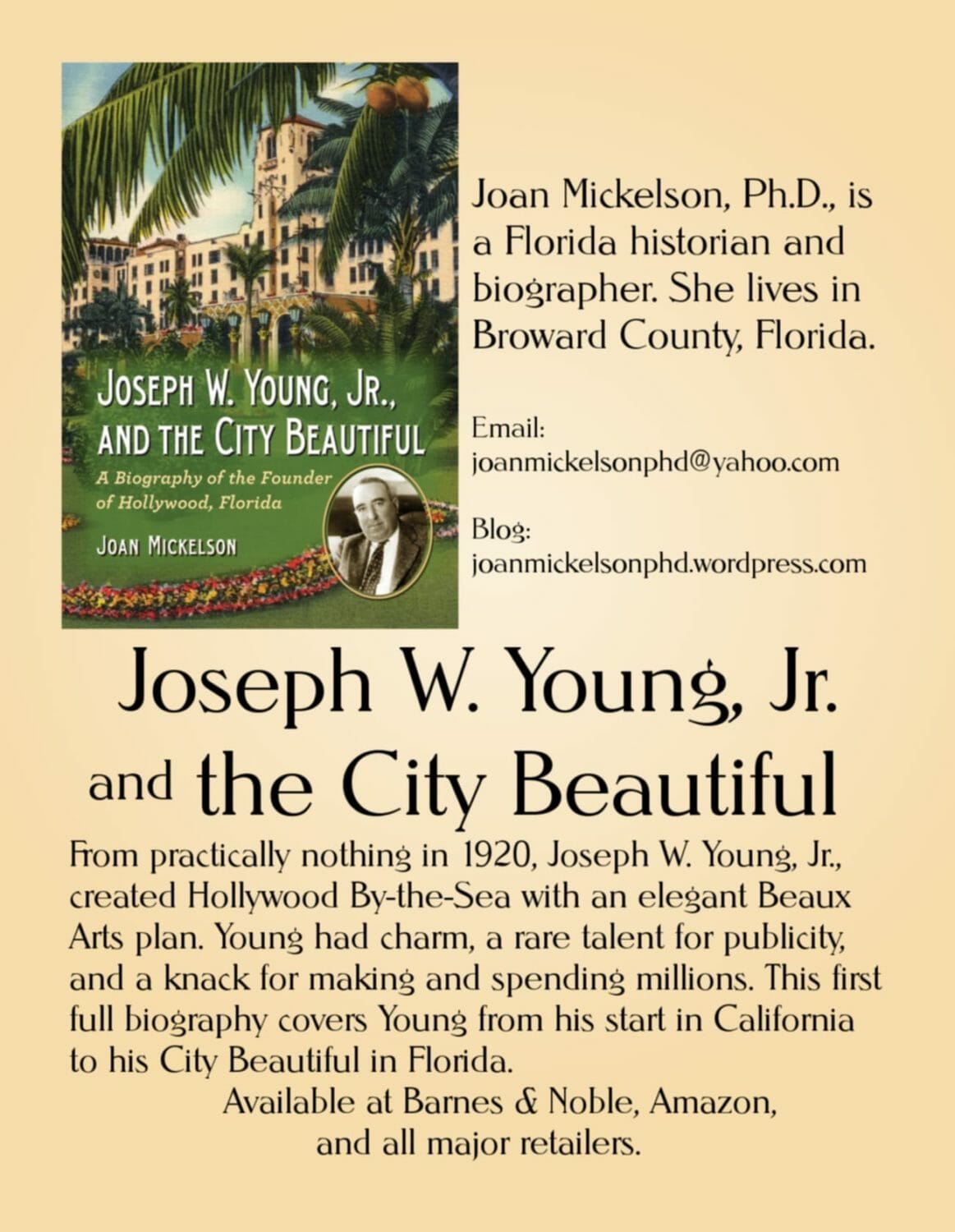