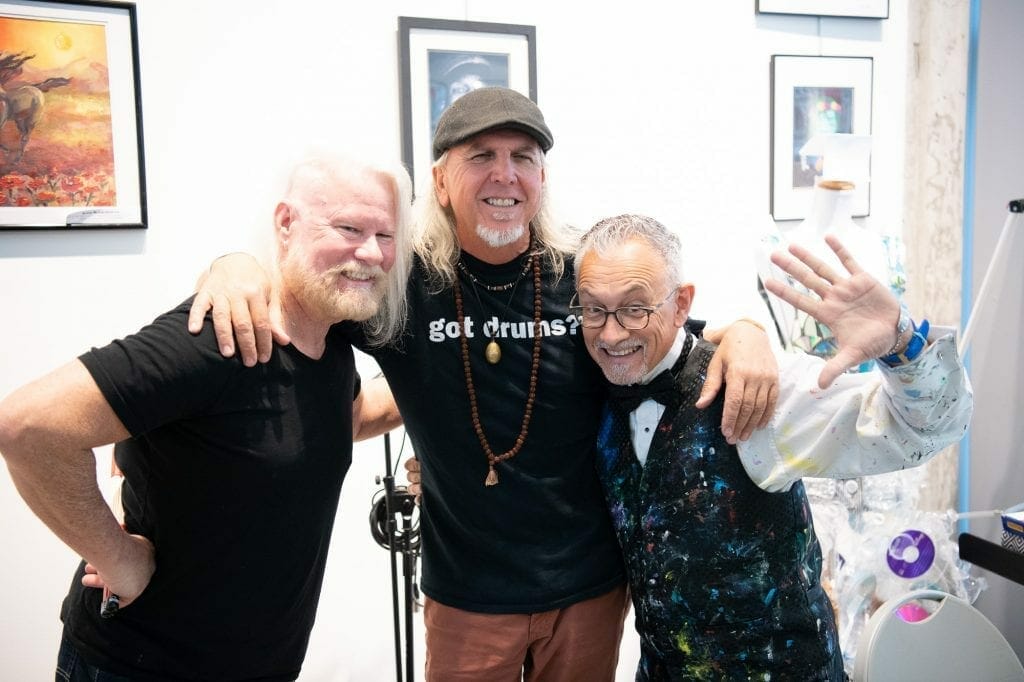 In the art world, gallery openings events are held in the highest regard. Artists, surrounded by high profile guests, reporters, and enthusiasts, pose proudly before their works, beaming as they gain the exposure that will propel their careers forward.

On Thursday, April 5, a class of talented middle school art students from the Hollywood Academy of Arts and Science got an early start as they exhibited their masterpieces at their 12th Annual art exhibition, an exciting and well-attended multi-media extravaganza at the Young Circle ArtsPark Gallery.

“One thing that made the event so unique was that it was completely student organized,” said HAAS principal Mark Hage. Students critiqued, judged, matted, framed and hung their pieces, designed the event and collaborated with public relations representatives in marketing the show. Students created their art live all around the space as attendees watched and spoke with them about their work.

Upon entry, one of the first things visitors saw was a video montage made on the Holocaust. The students made the documentary with the help of master documentarian and producer Cathleen Dean. They titled the documentary “Never Again,” a phrase used to describe the atrocities Nazi Germany committed against Jews. Unfortunately, Never Again resurfaced again recently at Marjory Stoneman Douglas High School. HAAS students decided to dedicate their documentary to both MSD students and Holocaust victims.

“The survivors of the Holocaust are now in their nineties, so we felt it was very important to have them tell their tale before it was only understood as history,” said Hillary Fine, arts director and visual arts teacher and department head at HAAS, who coordinated the event.

After learning about the Holocaust, students had the opportunity to meet local Holocaust survivor and author Fred Mulbauer.

“I’m very impressed with their work,” said Mulbauer, who has been living in the U.S. since 1945. He volunteers weekly at the Holocaust Memorial on Miami Beach, sharing his experience and spreading the message of “Never Again.”

With a great turnout, this event gave students valuable social experience and exposure, in addition to what they have already gained in local, statewide, and national competition. The award-winning works displayed at the event fit into five categories:  Radon Awareness, Art in the Capitol, Innovative Expo, Scholastic Art and Writing, and Year Book Contest. HAAS Students placed highly in each competition and took second in the nation in the Radon Awareness Competition. This embodies one of HAAS’s most important goals: to emphasize both academics and humanities.

“We work very hard to incorporate the arts into our core curriculum,” said department head Fine. This contest helped the public learn about a problem faced by many in other regions of the country. Radon, an element and byproduct of decomposition, naturally occurs in soil and water, often building up in homes. It is the second leading cause of lung cancer. Increased awareness of the effects of radon can help prevent lung cancer and save people’s lives, according to Cuddihy.  Through their work, HAAS students are actively educating their community on important issues.

“This school has really grown and has really expanded on the level of art [it produces],” asserted Vice Mayor Case.  “We are really impressed and very happy.”

The public is invited to view the exhibition throughout the month of April at the ArtsPark Gallery – a professional gallery owned by the City of Hollywood in the Visual Arts Pavilion at ArtsPark.

For information on HAAS, contact Mrs. Hilary Fine at 954 925­ 6404 or hfine@hollywoodcharter.org