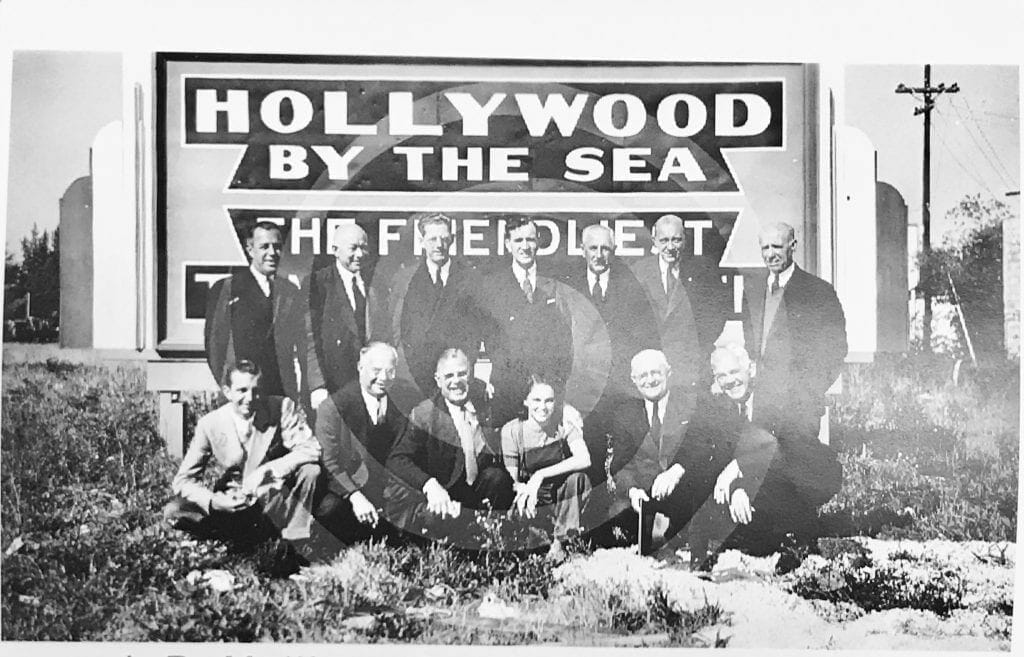 Sometimes it seems like everyone we meet in South Florida is a transplant, who came to Florida for either the weather or the business opportunities or the international allure of beaches and people. But today we bring you Ms. Patti Clempson, a Hollywood native who, although she still emits the energy of a teenager, actually just turned 80, and has some wonderful stories to tell about coming of age of the city we call home.

“Hollywood had beautiful parades on all the holidays,” recalled the South Broward High School graduate, class of ’55. “They’d start up at Hollywood Boulevard at 24th Avenue by city hall, everything would be draped with crepe paper, all the floats were handmade. They’d set off the old cannons from the VFW hall, with old trains, and if you had animals, you went into the parade too, with wagons or tricycles or carrying them, it was so nice CB Smith, who was a local businessman, was usually, but not always, the grand marshall. He had three daughters, and they each had coral rock houses on Taylor street between 24th and 26th. I’m not sure if they’re still there,” she mused. “We can look.”

Patti now is the Hollywood Historical Society in-house historian and one of the chief storytellers. Although she is quick to point out that she’s not a trained or educated historian, she is surely one of the best in the city.

“There were tons of tomato fields. The Sunset Golf course on Johnson Street was one of them, a huge tomato field, until the salt water intruded, and one by one they all went. I remember, I think it was 1949, it was the Dania Tomato Day Festival and Parade, there was a big carnival, over where the Dania City Hall is today. The plaza was filled with merry go rounds, Ferris wheels, and we walked down to Dania, it was nothing to walk in those days. they had a big parade down the Federal Highway. And there were tons of tomatoes, and you know how they get, kind of soft and rotted. And the Junior and Senior boys and girls got into a big tomato fight. Life was so simple then… I don’t remember any more parades down the Federal Highway much after that.”

Patti’s father, Donald Joseph Mailloux, came to Florida from Fowler, Indiana in 1924 with his brother, (Patti’s uncle Willard), and his father, Patti’s Grandpa. They lived in tents off Federal Highway around Taft Street until they got settled, and then her Grandmother came with the rest of the family. Their last three children were born here. He later met Patti’s mother Helena Trueblood, also from Indiana. They married in Hollywood and had seven girls, who gave them 15 grandsons and two granddaughters. Most of the family stayed in and around Hollywood until they retired. Many of them went to school here — Little Flower and South Broward and McArthur.  Mr. Mailloux drove Patti and some of the other older kids to the historic St. Anthony’s in Fort Lauderdale to go to Catholic School until Little Flower opened in 1949.

Patti’s father and uncle owned an auto repair shop across the street from Dowdy Field on Dixie Highway, which was at that time lined with small businesses, mom and pop markets and residential homes. Her grandfather owned a gas station on Federal Highway on the way to the Port. Patti loved to go by the shops to see her family and help out.

“It was the 1940s, and everyone dressed nice to go to work, even to pump gas,” she recalled. “I loved to go and visit my grandfather and aunt — it was our family business for a long time.”

Patti’s father rented and eventually bought the building where they ran a successful business with a varied clientele until one day, Patti found her dad, midday, lazing under a Linden tree in their backyard.

“Why aren’t you at work?” she asked him.

He hadn’t asked or told anyone. He just sold the building back to the original owner.  And that, as they say, was that. “That was my dad,” she quipped.

The family bought a house on 26th Avenue between Pierce and Lincoln. There was, she said, nothing around them. “Just dirt. And trees. And animals.

“There were pine trees, oaks, palmettos, rabbits, turtles, wildcats and raccoons. There were birds that are not around today, like meadowlarks. People hunted and fished to eat and everyone shared. They ate deer, frogs, rabbit, squirrel and doves. Down the street, the owner of the Sun-Tattler raised pigeon and called it squab, and people ate that too!”

For fun, she said, they’d “relocate” people’s animals, and swim in beautiful turquoise rock pits. There was an old empty house and it was their playhouse. She recalled that there was a man who had a big piece of land over on Taft Street near what would become I-95, who would rent horses for the kids to ride for the at-that-time hefty sum of $1 per hour.

Patti, a bit of a tomboy and even at that early age a little bit of a renegade, eschewed girlish classes and took shop, where she learned carpentry. She told of a girlfriend, Nellie, a daughter of CB Smith, who could fish, skin cats, and was eventually one of the first women to own a property in her own name.

“She was independent,” said Patti. “She was the son her father never had. He told her that!”

She also recalled a beautiful woman, a Mrs. Davison, who lived in a house near the site of the present Memorial Hospital.

“The house was in a park, and when it rained, it would flood, and she had to stay in,” she remembered. There was very little built any further west than there.

“All the houses in Hollywood even then were built to withstand the storms, after the great hurricane of 1926,” she recalled. “After that, all the door jambs were built in one piece to resist the winds.”

She told of Hollywood’s first nursing home, Doc Aspy’s Rest Home, on the corner of Polk Street and 26th Avenue facing City Hall, and a beautiful large home on the corner of 24th and Hollywood Boulevard with a big, wraparound deck, where people would sit rocking, and watch the world go by. It was, she said, a simpler, easier, time.

Development of Hollywood began in earnest after World War II.

“They built a section at a time, first on the south side between Pembroke Road and Hollywood Boulevard, building houses for veterans a few at a time. In 1955, they started Hollywood Hills. Memorial opened in ’52. The Lakes houses were built first, she noted, but those were really mostly winter homes, that’s why so many of them are not so big. “But people that worked lived west, and they still do.”

As the city grew, so did its many dedicated inhabitants.

“City Hall had a tree for every state around city hall park, and there was one man, a Mr.Brigden, who tended the flower circle,” she said. “He would walk there and care for the park. One man. And his son in law took care of Orangebrook. And there was another man who did the same around Young CIrcle. These people had no money, but they loved the city.

“There were two other people who worked tirelessly for the city but never got a paycheck. One was Bob Anderson, the husband of Cathy Anderson, He loved this city until the day he died. The other is Tommy Wohl, who built the Home Tower and Home Federal Savings. He lives in central Florida now but he was always a champion for Hollywood.

“We had a good life,“ she said, “but these days, things have changed.  The world is a different place and here in Hollywood, there are so many transients, no sense of ownership. Not like it has been, and I worry about what will happen when the people who are here now are gone.

“Everyone is welcome to visit us at the Hollywood Historical Society, and we invite them all,” she declared. “When people come in I want them to see everything. There are lessons to be learned from the past. We had a good life here and we have to keep that respect for the past.”

So Patti is happy to hear that there are many young people who are moving up and taking part in the City, the Chamber, the committees and more.

“We have to keep building, but we also have to keep caring about the preservation of the past.” she believes. “It all stems from how we are about our own neighborhoods. We work hard at keeping things nice, taking care of the character…It’s good to know that there are young people in place to take over, fighting for green space preservation and keeping our city beautiful.”

“Joseph Young gave everything to build his Hollywood. We owe it to him and his city to keep it the “Friendliest Little City in South Florida. Or something like that. Whatever that sign said.  I’ll have to find that picture,”  said Patti.

Patti Clempson believes she’s the Luckiest Old Lady in the World. “I have friends of every kind and color, and I’ve had a great life,” she said. We think we’re lucky to have met Patti Clempson.