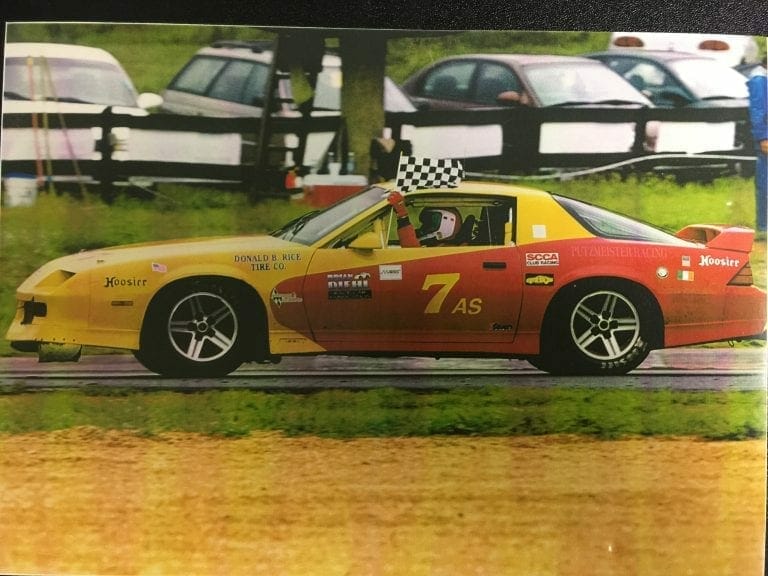 As Hurricane Irma took aim at South Florida in September, Hollywood condo resident Herman Melotti got into his special Cadillac, with a Corvette engine and supercharger and raced up the turnpike to Orlando. Melotti, now 90, arrived way before the powerful storm battered the Keys and soaked Hollywood, says Joanne, his wife of 28 years. The threat from the Category 4 hurricane, the most devastating to make landfall here in 12 years, brought out the racing spirit in the 17-year Florida resident, who got behind the wheel of a Caddy that can run up to 200 miles per hour.

Attraction to this much potential speed is not surprising, considering Melotti, a retired engineering and marketing executive with Goodyear, spent many weekends off from work racing cars in Mid-Atlantic Road Racing Series and Sports Car Club of America competitions, winning MARRS and Kryder Road Racing championships along the way.

What caused a meticulous man with the mind of an engineer to enter races at speeds up to 170 miles per hour? 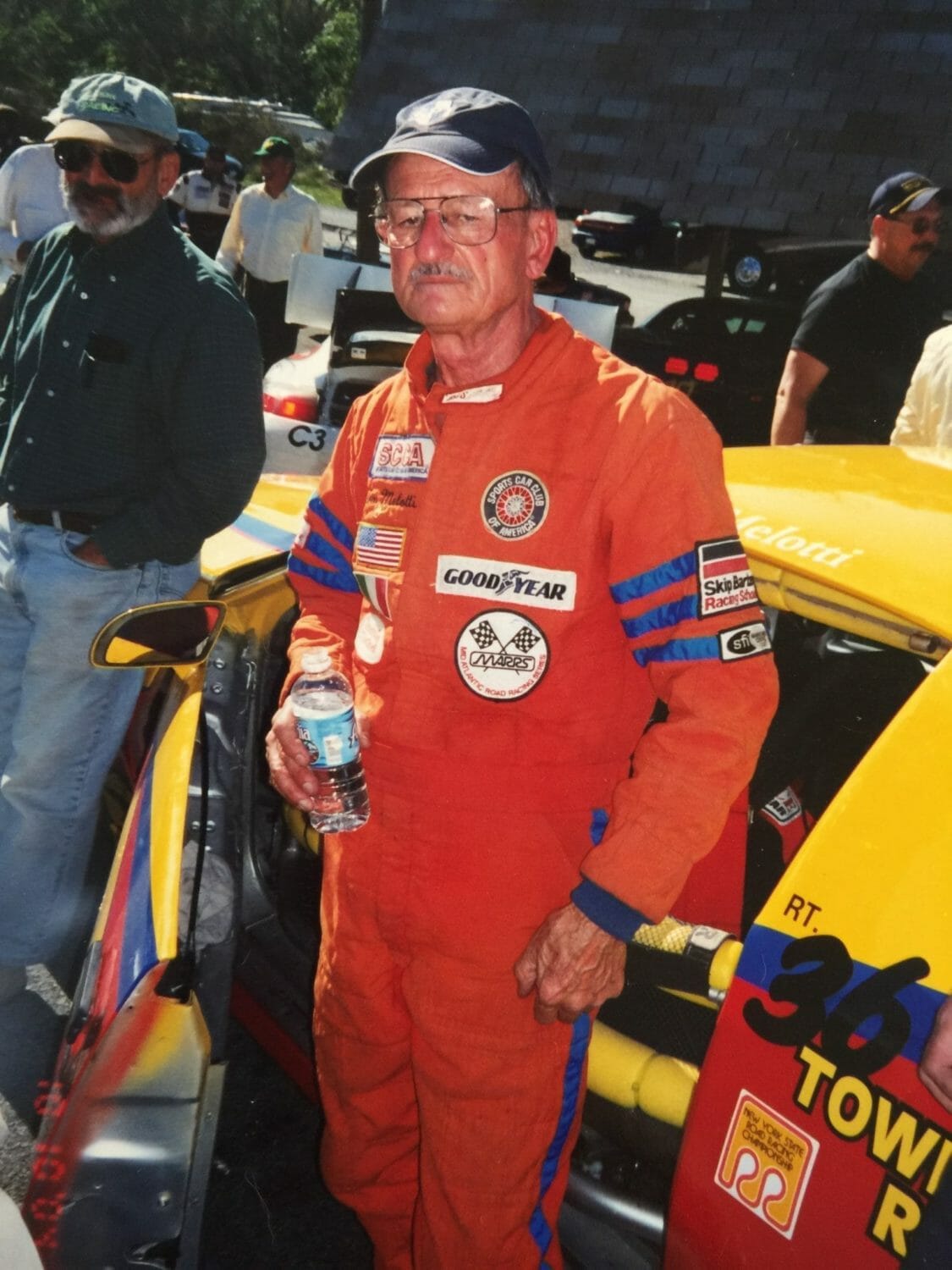 Maybe it’s in his blood. After all, Giacomo Agostini, a second cousin, is a championship motorcycle racer. According to Wikipedia, Agostini won 122 Grand Prix and 15 World Championships and was inducted into the Motorcycle Hall of Fame.

Melotti’s interest could also trace back to how he was nurtured. The father of five was introduced to his first vehicle, a “kid’s car,” at age 4. He drove the 3-speed stick shift after mechanics at his father’s car dealership made it for him in his native Italy.

Or it could be in his bones, which were broken twice when he played quarterback and halfback in high school and college football, according to a May 1962 article in the Cumberland (MD) Evening Times. 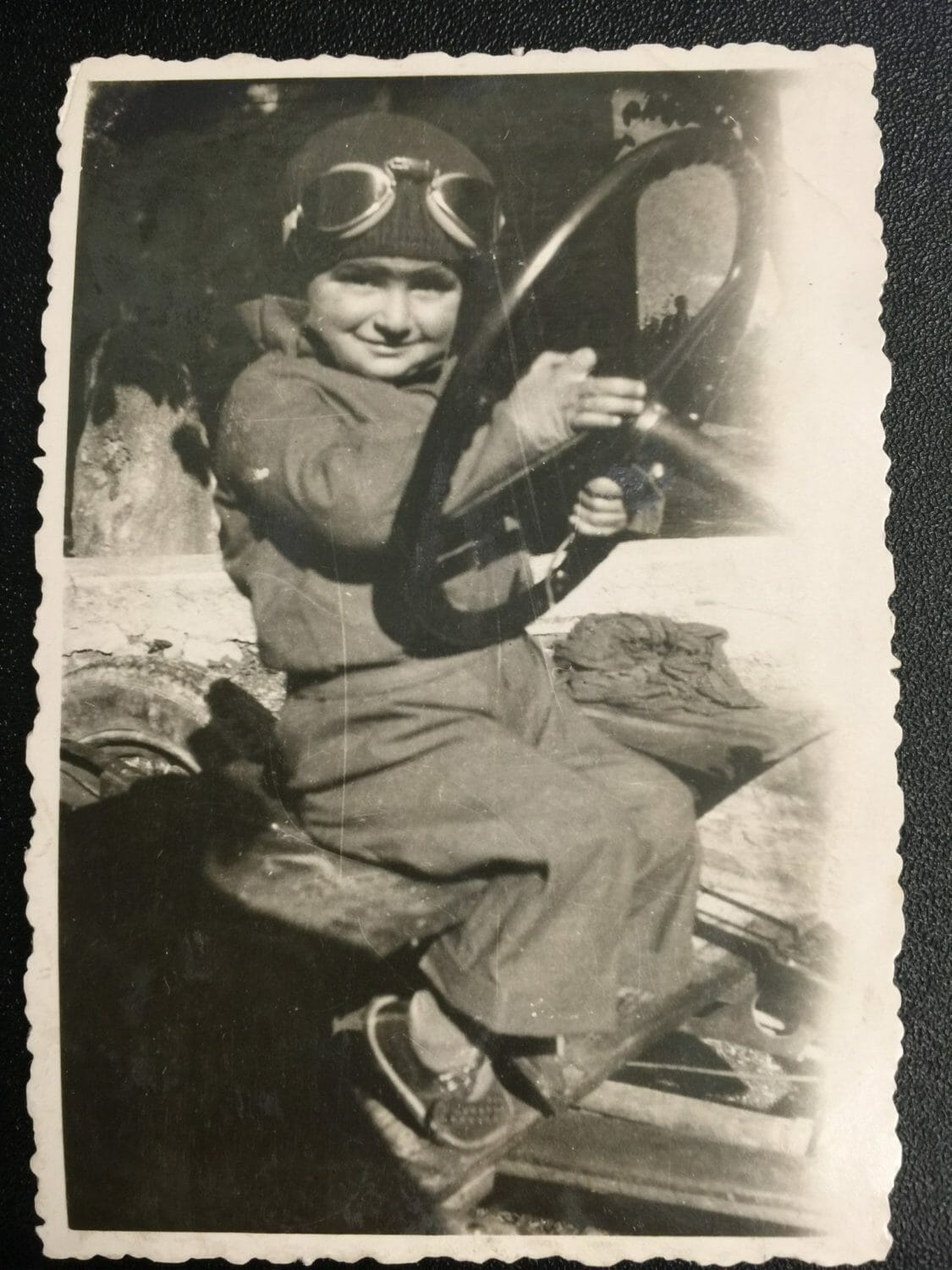 “I just had to get into something of a competitive nature after quitting football,” Melotti told the newspaper, which reported he drove an Alfa-Romeo Veloce when he raced there in 1962.

Melotti got his racing start in 1954, when he designed tires for Goodyear in Cumberland and earned his novice license. Busy during the work week, he competed on weekends in about 200 races over the years, retiring from racing for the first time in 1967. According to Melotti, “Family obligations and work-related travel” around the world sidelined him from race tracks, mostly in the mid-Atlantic region.

However, Melotti retired from his executive position with Goodyear in 1995, and returned to competitive racing in 1996, running his last race in 2010, when he was in his 80’s.

“With complete dedication to vehicle preparation, I was convinced that I would be competitive, and I was,” he said.

In 1955, armed with a national competition license, Melotti challenged experienced drivers in Sports Car Club of America competitions, initially driving an MG and upgrading to a Porsche “1600 Super” in 1957 and a Alfa Romeo “Conrero” a year later. The events sometimes jammed the track with 50 to 70 race cars as drivers made left and right turns and shifted from 170-to 30-miles-per-hour to handle the turns.

“You just don’t think about it,” he said recently about the crowded tracks. “You have to be aggressive.”

According to Melotti, his engineering background also helped him maintain his competitive edge. Entered in about 200 races, he consistently finished on the podium, which is reserved for people who place first, second and third. Melotti says skill alone didn’t get him to the podium.

“Racing speed is easy,” said the Hillcrest condo owner. But fighting for the next corner is the trying part, and that’s where I did my best.”

Driven to succeed, Melotti bought shocks from England that cost up to $600 a piece. The shocks, and a torsion sway bar on his cars, helped him negotiate the turns. Later, when competing in the American Sedan Club circuit, Melotti followed the rules, which allowed racing teams to make major modifications to their vars. This let him install a 9-inch Ford rear end, Corvette brakes, a Tremec transmission and a crate engine with prep work for racing, which cost at least $30,000.

The man who earned a Master’s degree in Chemical Engineering from Penn State University, took off his suit and tie on the weekend and replaced it with an orange racing suit and helmet. This routine continued until 1967, when Melotti first retired from racing.

But he returned in 1996, a year after retiring from a 44-year career at Goodyear. He raced Camaros until leaving the American Sedan circuit in 2010.

Along the way, Melotti got into four wrecks. One wreck flipped his car around and up in the air. He landed with a busted elbow during the Saturday qualifying event. But he returned the next day to race a different car to victory. Melotti’s success also got him into the Racing Hall of Fame in Maryland.

And Melotti bested Paul Newman, the late Academy award-winning actor, when both racers were senior citizens who shared a love of cars and racing. When he was in his 70s and 80s, Melotti said the people he raced against sometimes waved at him as they ran around the track.

“But I just passed them by and won,” he reported with a smile.

Melotti has other reasons to smile. On Nov. 20, he celebrated with Dale Earnhardt Jr. at a private retirement party held in the Goodyear suite at the Homestead-Miami Speedway, before Earnhardt ran his last race. Earlier, Melotti had attended a similar party in England for Jackie Stewart, the “Flying Scot” British Formula One racing champion. He was invited to both parties because of his friendship with the racing stars.

Melotti noted that his engineering background got him involved with Formula One racing when the organization was researching carbon fibers in the 1960’s. Racing cars were eventually built with the substance because of the lighter weight and greater strength.

Looking back on his racing career, Melotti said, “I have gone through three generations in several racing associations, when there were initially minimal safety regulations — no seat belts required in my inaugural 1954 racing season — to what it is today, with safety being emphasized as number one.

“Currently, living racing legends with whom I was affiliated are few, if any. I have been fortunate to be around longer.”

Always on the move, Melotti applied the brakes to celebrate his 90th birthday on March 1, joining family members to start his tenth decade of living.