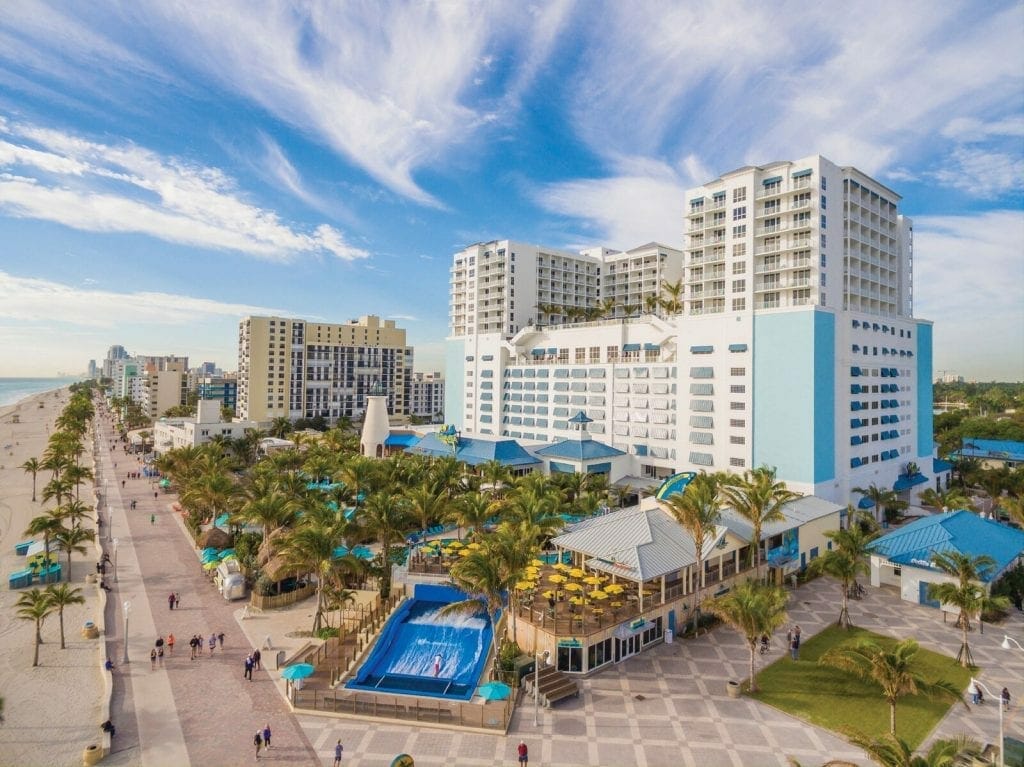 The Hollywood Commission held a workshop on the morning of May 30 to discuss concerns and provide some clarity about the sale of the Margaritaville Resort in April 2018 to KSL Capital Partners.

“We have before us a very unique situation and a very complex deal that was negotiated over many years in a series of agreements with multiple administrations as well as a number of mayors and commission members that began a better part of a decade ago,” opened Hollywood City Manager Dr. Wazir Ishmael. “Hollywood Beach specifically and the city, in general, has done incredibly well since the opening of Margaritaville,” adding that he is not minimizing concerns the public has about the nature of the complex business deal. “As fiduciary agents of the city, we are required to make sure that the public has a clear understanding of the project from it’s inception to the completion.”

Construction on the project, located on City-owned land leased by the development group, began in July 2013 and was completed in October 2015. The project received final approval from the City Commission (which also serves as the CRA Board) at a special joint meeting held on May 29, 2013. During this meeting, the Commission approved an Amended and Restated Ground Lease and an Amended and Restated CRA Compensated Funding Agreement that included the addition of the investment group, Starwood Capital into the project.

At the workshop, City officials mentioned when the deal between the developers and the city was being created, the Great Recession was taking place and it was difficult for Hollywood and developers to get financing and credit for major projects. The point was made that in retrospect, perhaps you could say the city could have gotten a better deal but under the circumstances at that particular time and place, it was probably the best deal possible.

Also, Margaritaville is a large, first-class hotel and resort and money had to be spent to make it the success it is. City leaders believe the resort will generate billions for Hollywood and that it has greatly improved the beach area.

Mayor Josh Levy spoke favorably about the Margaritaville and believes it will generate billions for Hollywood. He believes it benefits the city in many ways including providing a first class resort for the city.

“The acquisition of Margaritaville, and the strong sales price that it commanded reflects the continuing success of Hollywood Beach as one of the top-10 beach destinations in the country. The hotel’s initial investment group did very well with their investment, and as a city, we will continue to benefit from the millions of dollars per year that the hotel pays to us in annual rent and taxes,” said Levy.  “The hotel is leasing the land from the City, and under the terms of the lease, the better the hotel does, the more participation rent the City earns, above and beyond the base rent. We (Hollywood’s taxpayers) are in a long-term public-private partnership with Margaritaville, and every one of us should want for the hotel to be as successful as it can be for many years to come.”

Commissioner Peter Hernandez spoke bitterly against the resort in particular and the CRA in general. He believes the city is taken advantage of and lost money in the deal.

While she acknowledges that Margaritaville is a positive for the city, Commissioner Traci Callari was also disappointed and believes the Commission was not provided adequate information. At the meeting, she made requests for additional information about the 5% transaction rent issue that some feel the city is entitled to as well as additional financial details. She believes the commission was misled to believe the city was lending money to the developer to repay the city when it was actually a grant. “At the end of the day, the city is benefiting from having Margaritaville here. We are progressing as a city. We are moving forward. It’s how we got here that is the problem.”

Shortly after the scrutiny of the sale began in April, Mayor Josh Levy strongly encouraged residents to support and enjoy the resort.

“Jimmy Buffet is quoted as saying, “I don’t get tired of playing ‘Margaritaville’. It’s paid my bills for years.” Well, it’s now the same for us. We’re in,” said Levy. “Let’s enjoy the amenity, enjoy the revenue, enjoy the hundreds of jobs created, enjoy the improvements stimulated by the hotel upon its surrounding properties, and enjoy the live music that the hotel runs for us at the beach bandshell five nights a week. The hotel is a win, let’s be proud of our public investment and enjoy it.”