At 97, Melina’s Owner Elsie Johns aka ‘Miss J’ is Still the Talk of the Town 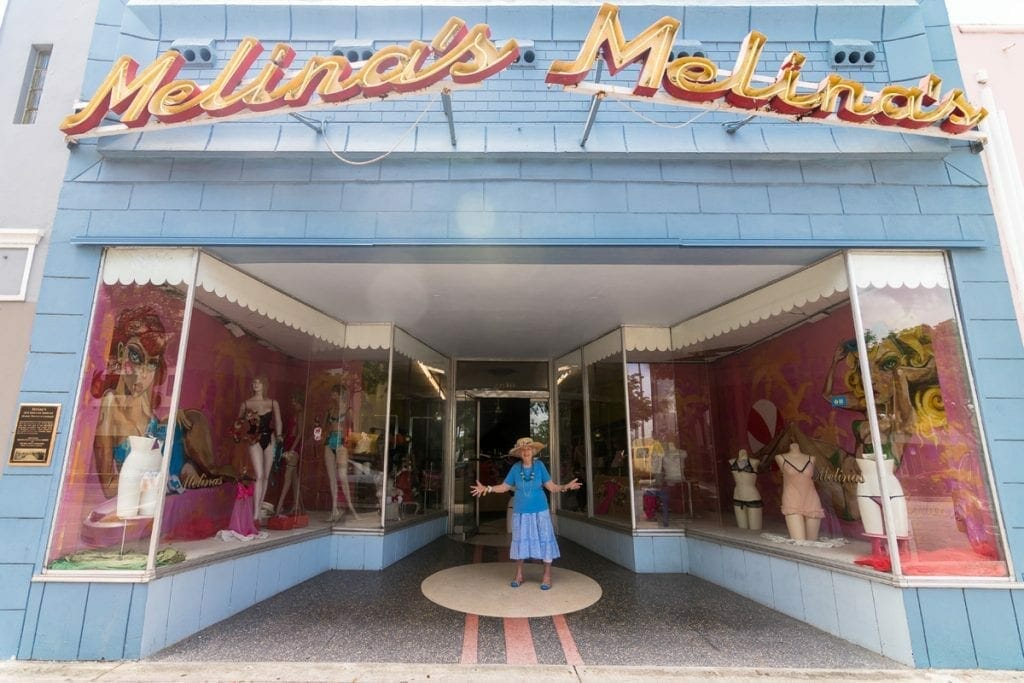 “They call me Miss J,” said the beautiful birthday girl, as she prepared to blow out the candles on her cake.  “Miss Elsie sounds so old-fashioned.”

And with a little help from her friends, her family, members of the Downtown Hollywood CRA, the Greater Hollywood Chamber of Commerce, the Hollywood Historical Society and the Hollywood Women’s Club, neighboring merchants of her store, Melina’s on Hollywood Boulevard, local journalists and other Hollywood dignitaries, she blew them all out.

At 97, Miss J, owner/operator of Melina’s, the oldest continually-operated family business on Hollywood Boulevard, still goes into the store almost every day, attends Chamber events, sees friends, is the longest-running member of the Chamber, and is a true jokester.

“I would go out every night if I could find someone to go with — I don’t want to be a bar hopper, although I think it’s so interesting to see how people operate at night,” she said with a smile.   Does she have a boyfriend? “I’ve had boyfriends, of course,” she confided, “and now, any man my age, I’d have to take care of!  But I like merchandising and I like working and I thank God that he gives me the strength and the courage to go to work every day.  That’s what I have to be thankful for…that I feel good and I feel like working and I have four limbs to go.

“I couldn’t stand staying home — even if I had to go to a restaurant and wash dishes,” she continued.  “I have to do something, to keep busy. If I didn’t have the business I would do something.“

Miss J lives in Downtown Hollywood in the same house she grew up in — “I haven’t had money enough to move up,” she quipped — and works in the building her father built when he moved his family to Hollywood from Western Nebraska in the late ‘40s.   Although it’s duly noted that she often makes her own hours.

“If you want to see me, you may have to come to the store at midnight, I guess,” she said.

It was the last years of the war when Matt Tomich, a successful farmer who actually came to Florida to retire, set about building the now historic building that houses the store named after his second wife, Elsie’s step-mother, Melina Tomich.  Supplies were scarce and he had to call on friends in other states to send in kegs of nails and lumber along with other staples.

“Hollywood was a slow southern town where people knew each other and were kind to each other,” recalled Elsie, “full of nice people, mostly adults who came here to retire.  It was small, and close to Miami, if you wanted the big time.”

Melina’s started out carrying girls and some women’s clothing and underwear, and Elsie started working with Melina.

“I didn’t plan to — it just fell on me, there wasn’t anything else,” said Miss J of the job choice that ended up being her life’s career.

But how did it go from children’s clothes to the somewhat racy ladies undergarments often on display in Melina’s windows?

“First it was children’s underwear, shirts, and shorts, then the girls got tired of pretty little ruffled dresses, they wanted to wear blue jeans, so we had to change our orders.  We always carried some lingerie, and over the years, we just ordered what people wanted and it naturally materialized.

“Things were slow, winter was slow and summer was slower,” she laughed, as though that explained it all.

“It actually was sort of a natural progression,” Penny agreed.  “They always had lingerie, and they said, ‘Hey, let’s try some of these!’  And it worked, so they continued.  There were no big department stores nearby then, so people began coming to them for that type of merchandise.”

“I don’t think it’s any sexier than others,” said Elsie.  “Though I hope it’s sexier than Walmart!”

Entering Melina’s feels like crossing into a slower, simpler time.  From the inside looking out, you can see only Anniversary Park and lots of trees, imagining the days before traffic clogged the streets.  And the store itself hasn’t had many changes inside save one paint job about 15 years ago. Each of the family members took a color and worked in tandem to refresh the walls with the bold jewel tones that remain today, along with the original shelves, carpets and many of the vintage displays.

“When people come in, they say, ‘Oh, what a unique business’ and, ‘Ah, this is pretty!” Miss J reports.  “They say, “Isn’t this different? They’re astounded by the colors. I was, the first time I saw them. That’s why I wanted them.”

Miss J says business is slow in summer, like in most Florida businesses, but that she continues to get a lot of new and different customers.  She said that she misses the old days of Hollywood, but enjoys the new families and businesses and especially all the nice new private restaurants that have come to town.

She says there’s “no comparison” between Hollywood old and new.

“Well,” she mused, “l think change is inevitable, in every place that grows. So we have to accept it, stay with it and try to improve. Today, everything is all in a rush. Everybody’s always for ‘me,’ never mind helping fellow man.  We have to help people and teach them to be kind and good and it comes back to everyone two-fold. That’s what works for me. It’s what you feel warm with.”

She has always done and continues to do, a lot of volunteer work, with clubs such as the Navy League, two art museums, and the Salvation Army, where she has been a member of the Executive Board for many decades.  She’s the oldest active member of the Hollywood Chamber, where her mother preceded her, and she boasts that “after 50 years, I don’t pay membership anymore!”

Clearly keeping active is key in keeping Miss J so vital.  “You have to keep busy,” she believes. “I think it stems from your youth.  Take vitamins, eat good food, not too much liquor or beer drinking. And a lot of it is placement of your mind, if you have good parents that teach you good things.

But mostly, what keeps her going is surrounding herself with family, friends and meeting new people every day.

“Don’t be afraid to talk to people.  We’re all just human, you know.”

And that’s her advice to young people, those just starting out and really, anyone younger than herself.

“Get out and meet people as much as you can.  Boys, girls and old people too. Have conversations.  And travel. I’ve been around the world twice. There are not many places I haven’t been, just a few I’ve missed.  I’ve been to South Africa. To way up north to kiss the reindeer above Sweden and Norway, and down to the snow in Antarctica.  There’s no place I’ve been that I haven’t liked.”

“Do it. Charge that old charge card, pay it when you get old, but you can’t travel when you’re old and crippled and no longer interested. Travel now and pay later. There’s plenty to see and do. Get it together and go. It’s important in so many ways.”

The doorbell rings and the birthday cake gets wheeled in.  It’s time to take some pictures before the party starts.

And let the festivities begin.