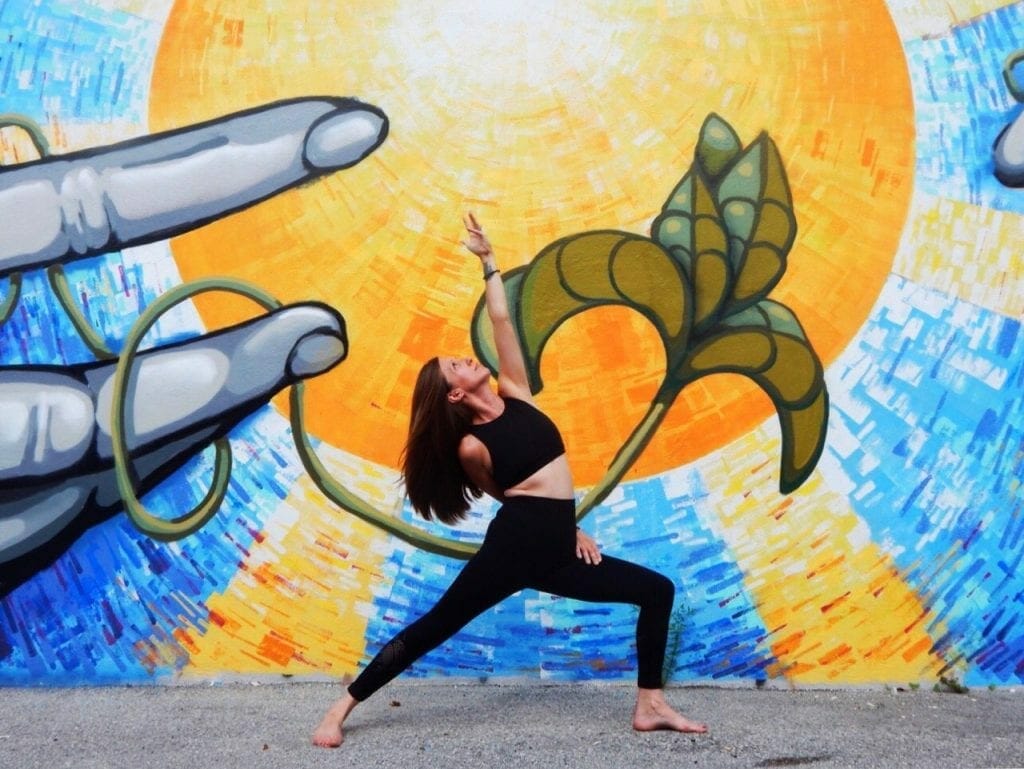 Franchesca Stoyer is a woman of many talents.  The busy young Hollywood wife and mother of two is a writer, a photographer, a gardener, and like many of us, she was still trying to figure out which to make her life’s work, when participating in a free community yoga class  in TY Park, going through the poses for exercise, when she had her ‘Aha!’ moment.

“I actually started 7 years ago, on my living room floor with a beach towel and a yoga CD,” she recalled.  And then, and about 4 years ago, at that moment in TY Park, “it became a passion. There was a calmness and peace, beyond the exercise benefits.  Especially when I went to my first teacher training, that’s when I was like, this is what I want to do. It felt right, it felt good. and it was something I could potentially share with other people. “

She began her first teacher training nine months later, she said, and “then it was like full steam ahead.”

Within a year, Stoyer became a yoga teacher.   She started teaching in late 2015 began giving free classes in TY Park, then in early 2016 brought her idea for community classes to the Yellow Green Farmers Market.  “Everything blossomed from there,” she reported. 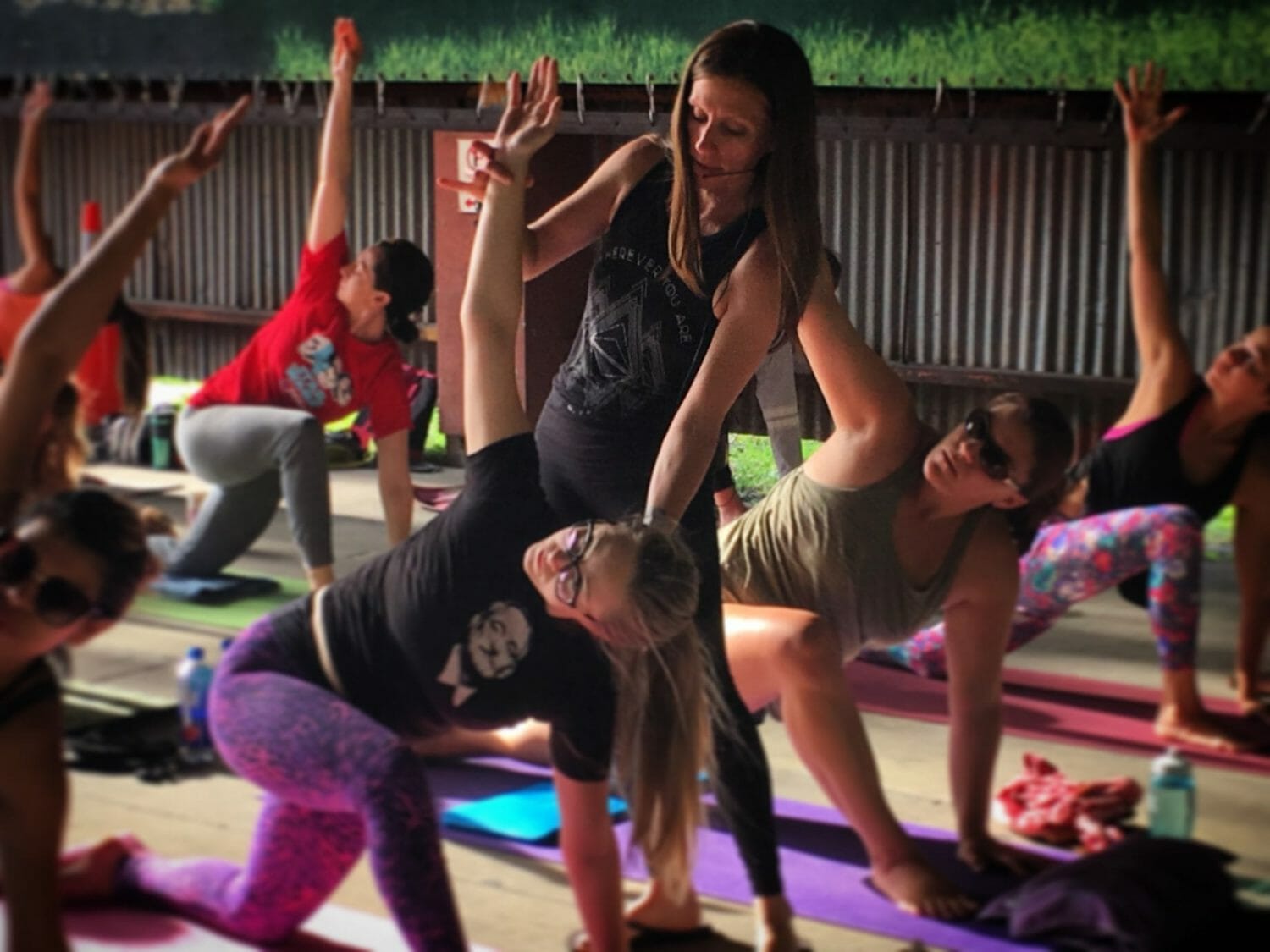 Today, Stoyer teaches classes at Bend and Breathe Yoga in downtown Hollywood and offers private sessions as well.  But by far her greatest love is the free class community class she offers every Saturday morning at 8:30 am at the Yellow Green Farmers Market. 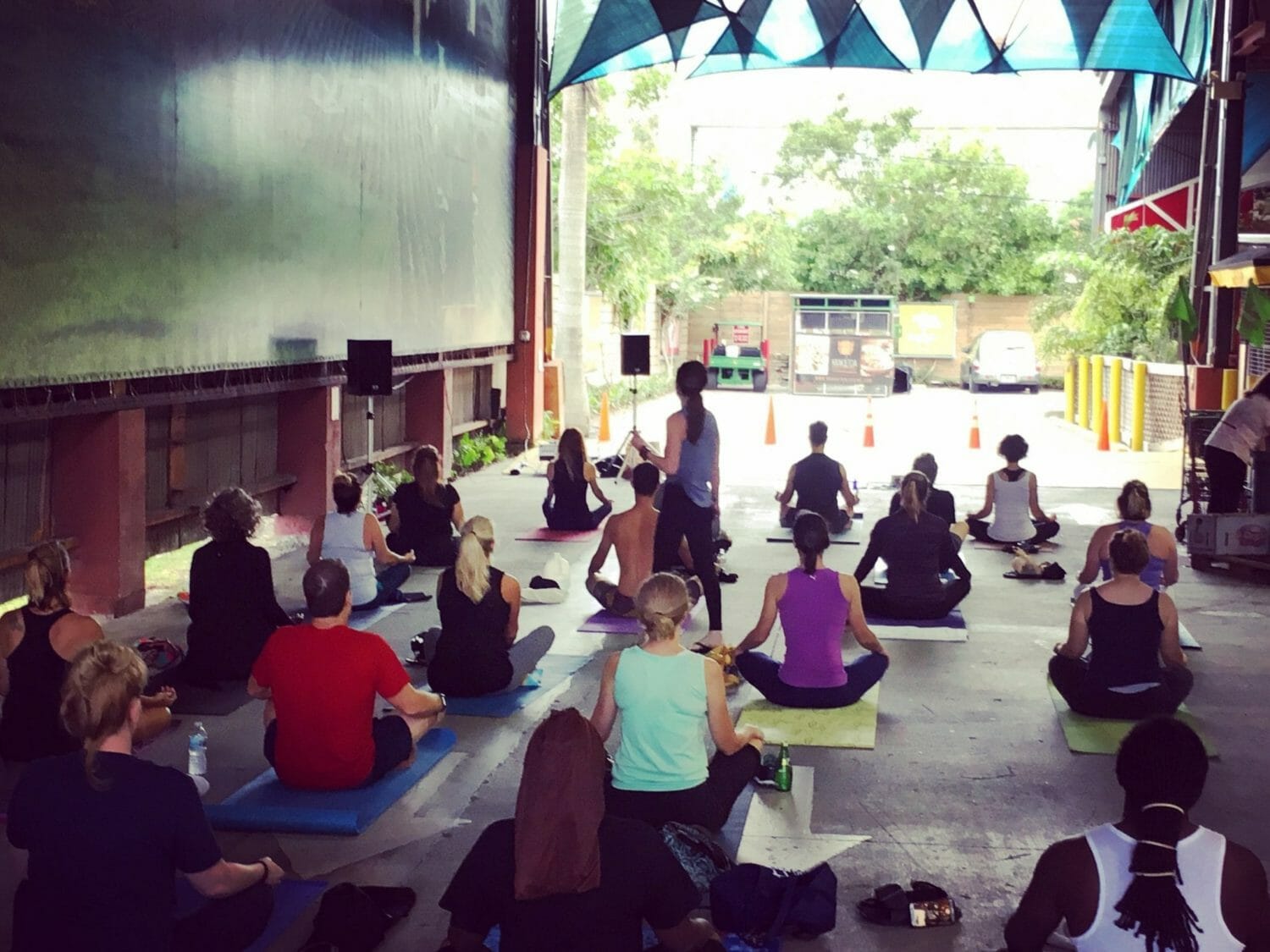 “It’s my baby,” she said with pride.  “I put a lot of work into building that class and bringing the community together there. Universe has been on my side and it  has grown immensely — with the help of Yellow Green, which has been wonderful in getting the word out.”

Stoyer reports that in the 2 ½ years since she started, she’s had as few as 8 to as many as 40 or 50 people in the class, and students from absolute beginners to those who have been practicing yoga for 30 years!

“I’m really grateful for that class,” she beamed, “especially since the way I got started was through a free class. Which was the whole reason that I started the Yellow Green class, to begin with.   I want to give people the same opportunity that I was given. Without that, I would probably never be where I am now.

“We provide a welcoming environment, a neutral place, where it’s totally non-intimidating.”

She admits to a special weakness for people stepping onto the mat for the first time.

“I like to think that it might blossom into a passion for them like it did for me,” she said, adding that,  “If it doesn’t, that’s cool too!”

For information on Stoyer and her classes at the Yellow Green Farmers Market, call  954 448 2393, visit her Facebook page:  Franchesca Stoyer Yoga, or email her at [email protected].   You may also be interested in her blog, www.simplelifeinprogress.com 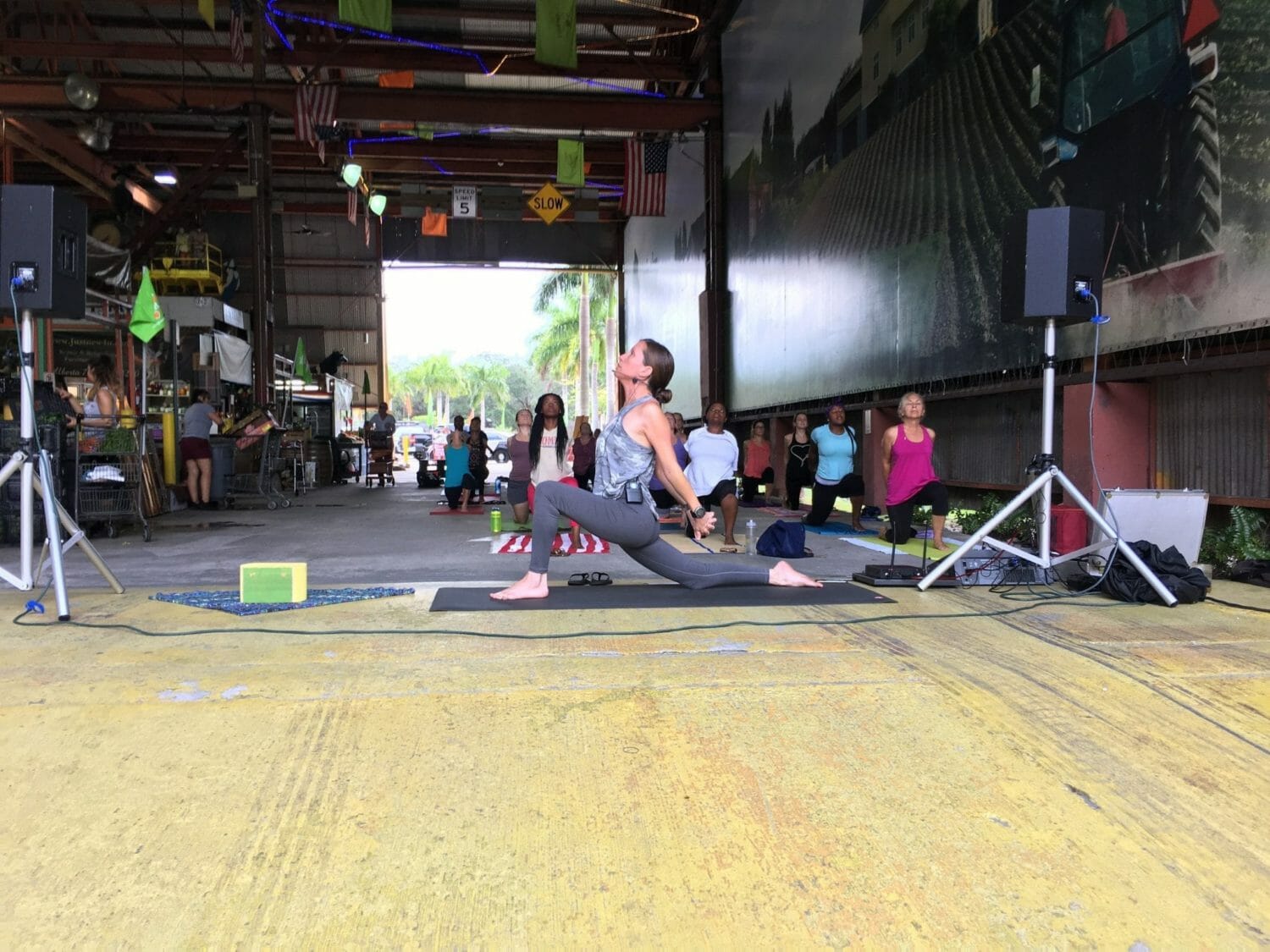 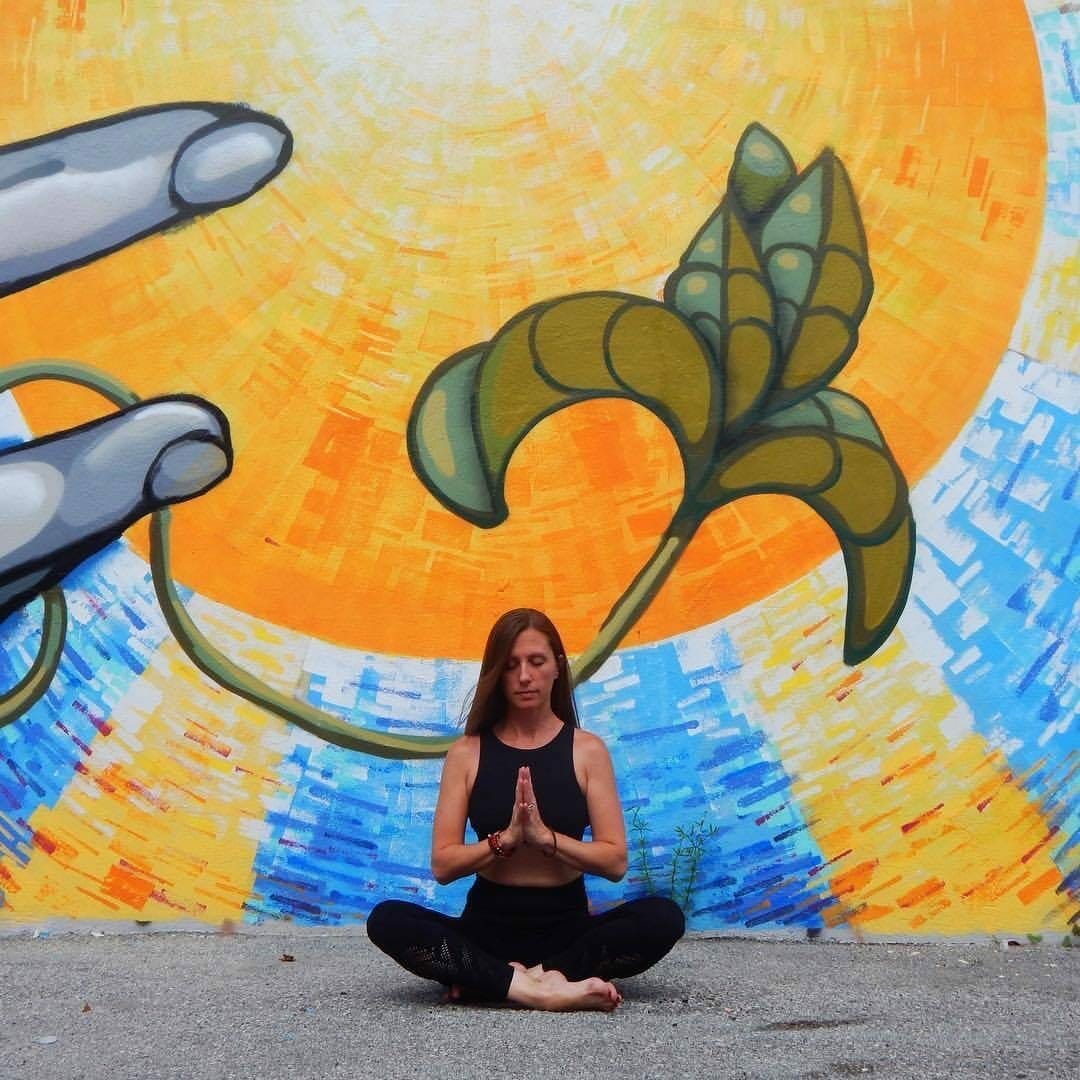