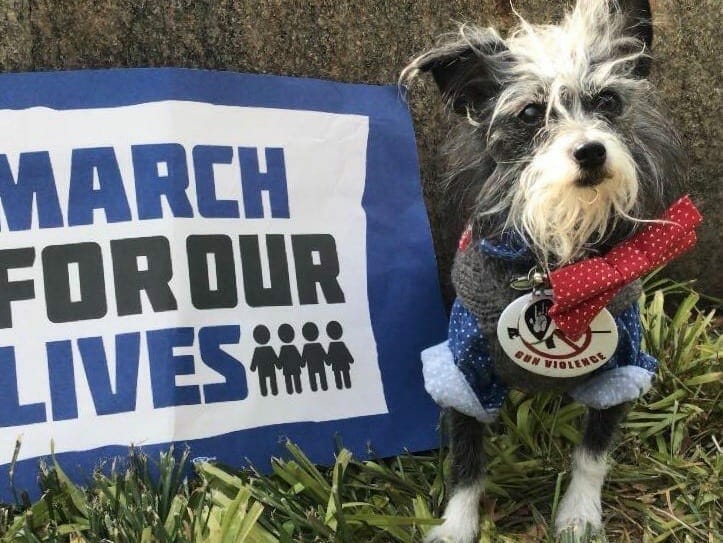 School’s out, the initial horror of the Parkland shooting has receded, the March For Our Lives is over and many students have graduated.

But the fight must go on, so Broward County senator Gary Farmer (34th district – D) called a meeting on Monday, May 14th at Lola’s on Harrison, site of the Toast for Our Lives Mocktail Party that helped raise enough money to send 11 students to the March in D.C., and invited those students to discuss the next steps.

We met at Lola’s on Harrison with Senator Farmer, his two assistants, the 11 students who went to D.C. — Sophia Villers-Furze, Moses Villanueva, Emily Saiz, Gregory St. Leon, Angie Ruiz, Timothy Laroque, Courtney Aslan, Ellie Branson, Olesya Malkova, Andreah Pierre and me — plus several parents, and Debbie Hixon, the magnet program coordinator at South Broward and the widow of Chris Hixon, who was the athletic director and security guard at Stoneman Douglas High School and who was a victim of the shooting.

Senator Farmer asked us what we had experienced and learned from our trips, how we felt about the status of the movement, and about our personal experiences. The students’ responses ranged from feelings of empowerment to ones of discouragement and helplessness. Ultimately the students all had one thing in common. We were all aching to hear the senator’s opinion on what we should do next.

“What do you recommend we do now?”  asked my fellow student Gregory St. Leon.  “What would most effectively prompt change and impact our legislators?”

The senator replied quite honestly, saying that the biggest threat to elected officials is that of not being able to secure reelection.  With this, we began to brainstorm ways to not only maintain the powerful momentum of the movement, but also ways to keep the officials on their toes.

With the midterm elections rapidly approaching, we discussed the importance of informing the public of the actual legislation fueling the protests. As the political climate intensifies, we plan to create more protests, demand town hall meetings, and make sure that citizens are INFORMED.  People need to know the available options when it comes to voting methods, just as they need to know WHAT exactly it is they’re voting for.

Over the course of the next few months, we intend to, as a group and/or with the assistance of other organizations, create instructional voting cards and through social media, teach others of the specifics of the legislation and officials on the upcoming ballot. We aim to encourage others to do the necessary research to develop political opinions that are truly their own. Acknowledging that individual research is often intimidating to some, we want to provide people with credible, non-partisan resources.

Everyone at the meeting was a senior, except for one student. We spoke about how the juniors have a solid and powerful community and are able to (and have to) continue the work in South Florida.

The meeting was refreshing in that it didn’t feel like a stop on a political campaign, as other encounters with officials often had in the past.  Creative and grand ideas were presented at the meeting– ones that will soon come to fruition.  We are thankful for this opportunity.