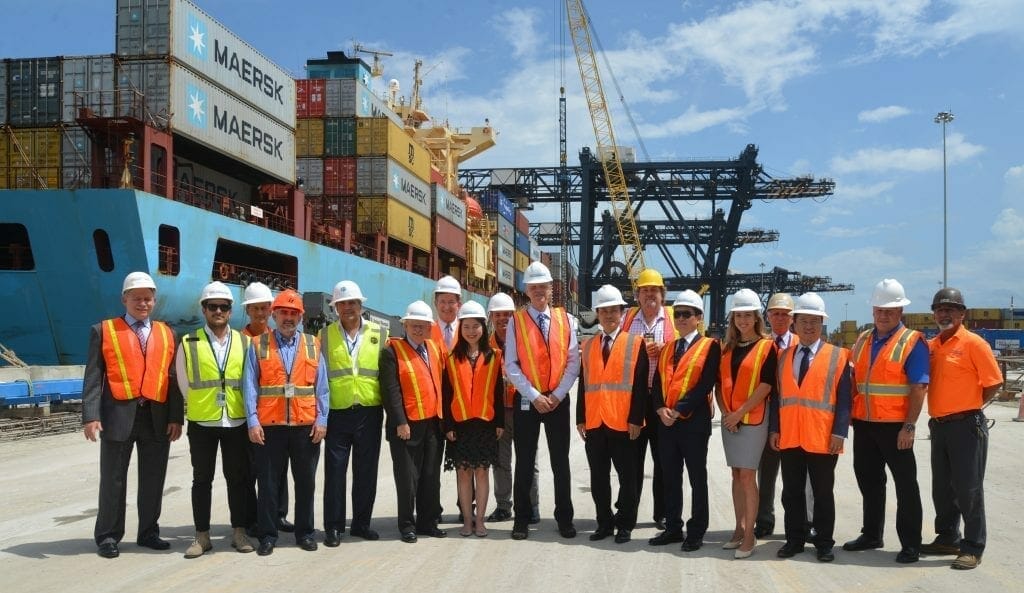 Construction is in the beginning phase for three Super Post-Panamax gantry cranes at Port Everglades. The design phase of these cranes is almost complete.

Steve Cernak, the chief executive of Port Everglades issued a second notice to proceed to begin manufacturing the cranes which are valued at $13.8 million each. The cranes are being built by Shanghai Zhenhua Heavy Industries Co. Ltd.  Inc (ZPMC) of China. ZPMC Chairman Zhu Lianyu and members of the company’s executive team recently visited Port Everglades and inspected the progress of improvements to the crane rail infrastructure now underway at the Southport docks.

This is considered significant because it means Port Everglades is moving into the manufacturing stage of the crane project.

“This is a significant step towards the delivery and installation of the first three Super Post-Panamax cranes later next year,” Cernak said. “Our customers need larger cranes now to be able to handle cargo already arriving on larger ships from South America and Europe.”

“ZPMC is honored to be a part of this important expansion at Port Everglades. We value the relationship we have built and are committed to the success of this new project.” said ZPMC Chairman Zhu.

In addition to the three cranes approved for manufacturing, the Port has options to purchase up to three additional cranes over the next five years.

The new cranes are part of the Port’s largest expansion project in its history, which includes lengthening the Southport Turning Notch from 900 feet to 2,400 feet to allow for up to five new cargo berths.

Local property taxes are not used for construction or operations as Port Everglades is a self-supporting Enterprise Fund of Broward County, Florida government. The Port generated more than $162 million in Fiscal Year 2017, October 1, 2016 through September 30, 2017, through fees collected from docked ships, cargo handling, real estate leases and other services.

The project is anticipated to support an estimated 5,500 permanent jobs regionally when completed and fully operational, according to Ellen Kennedy, spokesperson for Port Everglades.