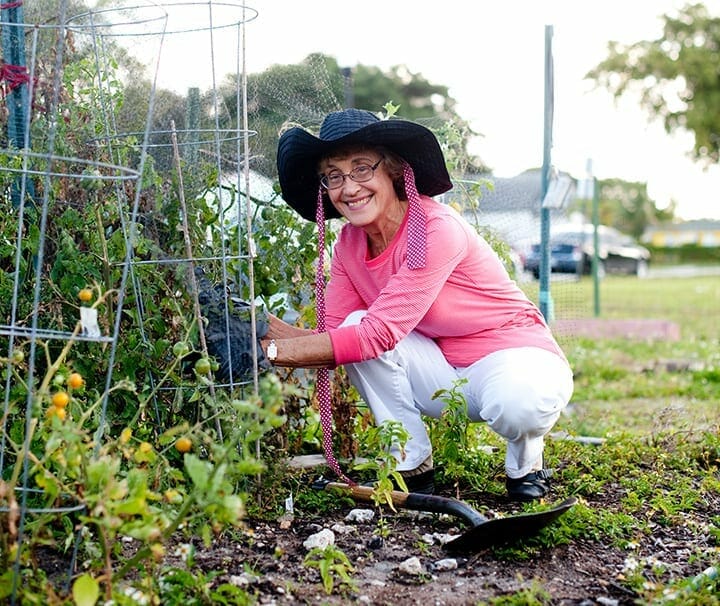 Hollywood is looking to move community garden, but a new location has yet to be decided on

In 2009, a group of gardeners in Hollywood took a vacant lot at the intersection of Dixie Highway and Adams Street that had been purchased by the city and turned it into a community garden since the city was doing nothing on the land.

Today, the future of this community garden, known as the Highland Gardens Community garden, is at stake. Pinnacle Housing Group purchased the 6-acre plot of land for $2.1 million in 2015, and plans to build affordable housing on the plot in order to improve the community and economic development of that area.

Maria Jackson, a real estate agent who currently serves as the manager of the Highland Gardens Community Garden, told the Hollywood Gazette that she was given a possible deadline of Oct. 1 for being off the plot.

According to email messages obtained by the Hollywood Gazette between Nancy Fowler, one of the Community garden leaders, and Keith Poliakoff, legal counsel for Pinnacle, construction of the housing project cannot begin until the garden has been moved.

“[W]hich is why they [city officials] are pushing for a very fast relocation schedule,” Poliakoff wrote in the email dated April 26, 2018. “The City is hopeful that they will have everything in place to close late summer, but I personally doubt it.”

City commissioners had been presented with seven possible locations at a recent workshop held by the City Commission in an attempt to plan the future of the garden, and it appears likely that the community garden will be moved to a location at Oak Lake Park on 56th Avenue next to the Fire Training Station.

Other possible locations discussed by commissioners and city staff included:

The Oak Lake Park location would be among the most cost-effective sites.

This location was advocated most passionately by Peter Hernandez, city commissioner for District 2, because the land is suited for placement of a community garden there.

According to Hernandez, other locations, such as Martin Luther King, Jr Community Center, are not currently suited to handle a community garden and it would cost a lot of money to design a plot of land for the community garden.

No decision was made during the workshop on where the community garden would be relocated to or if it would be relocated, and with the City Commission on summer recess until September, Jackson is worried that the commission will be unable to find a suitable location in time for the possible Oct. 1 move out deadline.

The Highland Gardens Community Garden was never intended to be on the property forever, but the City of Hollywood has been supportive of the garden in the past and even agreed to help out with moving the plants from its current location to any future location.

Funding for the move, according to Jackson, had been discussed by different city officials, with most saying that they would come out of Park Impact Fees paid by Pinnacle.

“I have advised Maria and the City that Pinnacle will pay $50,000 of its park impact fee, within 10 business days of the City’s request for payment and the City’s confirmation that such $50,000 will be credited against the total amount owed,” Poliakoff wrote in his April 26 email. “The City has advised us that they believe that such funds could be used to help relocate the garden.  In addition, we have been told that without these funds the City does not have the money in place to help. As such, we are more than happy to make this payment if it can resolve this issue.”

Many people in Hollywood like tending to the community garden and see it as a great asset for the city. According to an article in the Sun-Sentinel written by Susannah Bryan on Nov. 3, 2015, “Group and individual plots are tended by 200 gardeners who grow everything from figs and plantains to peppers and collard greens.”

But despite all of the positivity surrounding the Community garden, there may be personal tension between Jackson and members of the City Commission that could be detrimental to the future of the Community Garden. According to Jackson, Commissioner Hernandez praised the community garden at a Commission meeting in 2014, but recently he has become more critical of the garden and it appears that he doesn’t want to move the garden to the location preferred by Jackson and the other garden organizers.

Jackson claims that this change in position may be due to the fact that she ran against Hernandez in 2016 for his Commission seat. Jackson ran against Hernandez because she saw inside political deals being made between Hernandez, other staff members, and community members who were complaining about the garden.

There have also been issues concerning the timeline for Pinnacle to start construction.

“I’m receiving conflicting information from various parties concerning the timeline of the development and how it will impact the residents of the Highland Gardens Community, particularly with respect to the future of the community garden,” David Kout wrote in a May 1 email to Mayor Josh Levy, Hernandez, City Manager Wazir Ishmael, Chief Development Officer Shiv Newaldass, and Assistant City Manager for Sustainable Development Gus Zambrano.

“In order to allow me to give accurate updates to our residents, I’m asking that another meeting be scheduled that includes a representative from Pinnacle.”

David Volz contributed to this story. Updates will be provided. Photo by Courtney Ortiz.