Hollywood is at the Forefront of Ocean Conservation, and Cat Uden is on Her Paddleboard, Leading the Way! 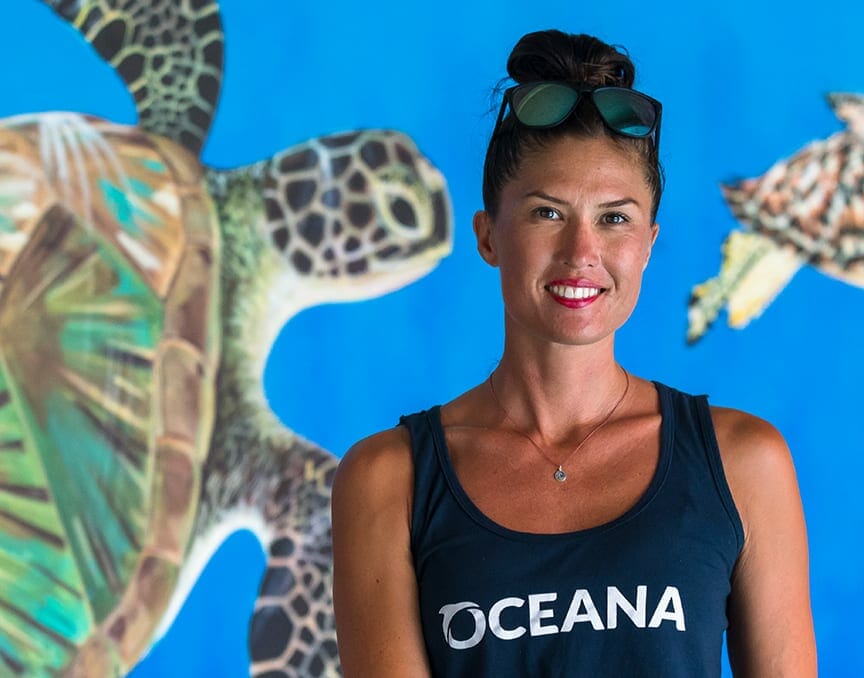 One day, about 10 years ago, Broward public school teacher Catherine Uden was paddleboarding on the Intracoastal and she realized how dirty it was.  And the young mother was bothered.

“There was garbage everywhere,” she recalled.  “When I saw manatees swimming around in it, I decided I had to do something about it.”  So, the dedicated teacher, mother and Hollywood resident started attending Surfrider meetings, participating in beach cleanups and volunteering.

And so began the transformation from a woman who saw something that upset her to a powerful woman who is now changing the way people eat, drink, run their businesses and otherwise relate to the beach and the seas in Hollywood, South Florida and beyond. 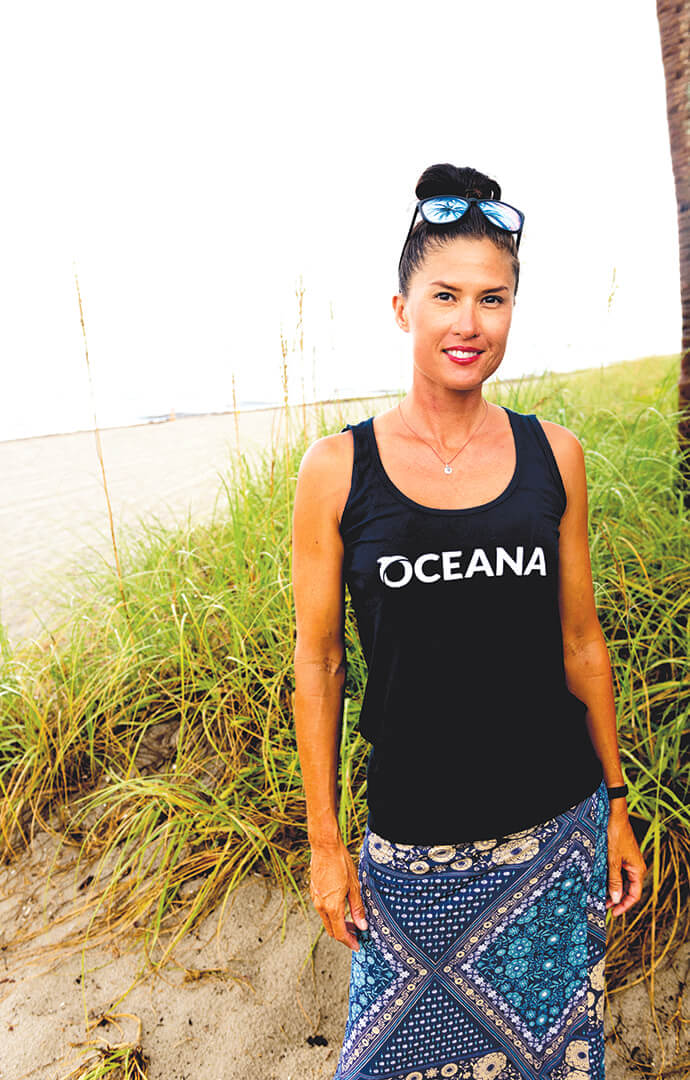 Meet Catherine ‘Cat’ Uden, the Broward Chair of the Surfrider Foundation, a powerful activist network dedicated to the protection and enjoyment of the world’s ocean, waves and beaches, and newly-appointed South Florida Campaign Organizer for Oceana, an international organization created in 2001, dedicated to protecting and restoring the world’s oceans on a global scale.

And maybe not coincidentally, Hollywood is at the forefront of conservation here in south Florida, with a strong commitment to beach cleanups and the enforcement of the plastics ban east of the Intracoastal, which will begin on October 1, 2018.

“WIth Surfrider, where I am still the Broward chair, as a volunteer, I’ve been working a lot on the beach cleanups, the March for the Ocean, and the Ocean Friendly Restaurant (OFR) program,” Uden explained. “With Oceana, it’s even bigger.  I’m expanding my projects to include fighting Illegal Fishing and Seafood Fraud, Seismic Airgun Blasting and Offshore Drilling and Fighting the Shark Fin Trade.”

The Hollywood Ordinance and the OFR

First, a bit of background.  Decades ago, Hollywood placed an ordinance on the books  (Ord. O-74-85, passed 8-7-74), stating that any business east of the Intracoastal waterway can not dispense non-biodegradable food service products, such as plastic straws, and polystyrene cups and take out containers. Last year, Florida passed a polystyrene preemption law, so that cities could no longer ban polystyrene.  Luckily, the city of Hollywood already has that ordinance, so, the city of Hollywood is able to enforce this ordinance because it is grandfathered in. However, the City had not been enforcing the ordinance.

Now, with the help of Hollywood citizen/activists including  Elizabeth Sanjuan,  Uden and Surfrider and the Hollywood Green Team headed by Barry Faske with the City Sustainability Board, East Hollywood businesses are getting rid of their non-compliant utensils in preparation for an October 1 enforcement deadline.  At the same time, Surfrider has created a voluntary accreditation program, the OFR, which offers participating restaurants a chance to acquire a collection of benefits in exchange for complying with a stringent set of earth-friendly criteria.

“Although,” Uden confides, “they’re not even as stringent as the ordinance is, so it’s to the benefit of any restaurant to join!”

Hollywood restaurants that jumped on board early include Ocean Alley, Billy’s Stone Crab, and Cafe Club by les artistes.  Screaming Carrots in Hallandale is the first restaurant in Florida to become a platinum level OFR, which means they abide by ALL the criteria.  Also in the program is the world famous Parrot Lounge in Fort Lauderdale, which reports that using Ocean-Friendly products is actually saving the restaurant money over the previous disposables.  Good deal!

March For The Ocean

The Broadwalk was packed in front of Charnow Park on a beautiful, sunny June morning as people gathered to take part in the worldwide celebration/protest called the  March for the Ocean.  The march was held simultaneously around the world and was spearheaded in Hollywood by Surfrider Broward, Free Our Seas and Beyond, the City Of Hollywood and the Marine Environmental Education Center at Carpenter House.

Marchers paraded in rhythm down the Broadwalk towards the Marine Environmental Education Center at the Carpenter House, where they stopped to say hello to Captain, the resident rescued sea turtle.  Some Marchers dressed in ocean and plastic pollution themed costumes and decorated posters sharing their messages of the importance of protecting our oceans.

Hollywood Mayor Josh Levy, Broward County Mayor Beam Furr, Florida Senator Gary Farmer, Commissioners Debra Case and Kevin Biederman and other local lawmakers marched, then made time to speak to attendees about the how critical it is we protect our coastal community.

After the March attendees visited environmental/ocean exhibits and viewed unique, one-of-kind environmental artwork created by Free Our Seas and Beyond, using repurposed plastic debris collected from the artists daily beach clean up on our very own Hollywood Beach.

Seismic Drilling and More at Oceana

Last month, the city of Hollywood be­came the 71st municipality in Florida to unanimously pass a resolution against offshore drilling and exploration, including seismic airgun blasting.

According to Uden, Hollywood also adds to the growing national opposition with over 216 municipalities on the east coast opposed to the expansion of oil and gas activities off their shores.

Uden explained that the government wants to lease underwater land just a few miles offshore for seismic explosions to be set off every 12 seconds from Cape Canaveral to Delaware.

“These permits will be given without current data,” she explained.  “For example, this year the Atlantic Right Whales have had no calves spotted this season!  Florida fishing and water sports and coral reefs will be affected for years and years to come.

“We are meeting with clubs, activists, and coalition partners to strategize what to do about this moving forward.  There are Tidal Town Hall meetings and we’ll be attending the Oceans and Coast Lobby Day in Tallahassee in January, to talk to the lawmakers about these issues.  I’m so grateful that I now get to focus on protecting the ocean full time with my new position at Oceana in addition to my part-time volunteering at Surfrider.”

“So, I’ve been volunteering all this time, I’ve become involved on the executive committee, and I’ve always wished that I had more time to devote to it,” continued Uden.  “It’s almost like a job that you don’t get paid for. A lot of people would ask me to do things, especially in schools. But as a teacher, I couldn’t get out during the day. I truly never thought I would be able to do this as a second career!”

Actually, she added, she never thought she’d even have a second career, let alone even a dream of being able to work for a conservation organization.

So, when her friend and associate Erin Handy, who holds a similar position with Oceana in Jacksonville, suggested she combine her profession and her passion and actually get paid for doing what she loved, she took the leap…and a leave of absence.

“I’ve always wanted to devote more time,” she said, “so maybe this is the right time.”

“And now, it’s kind of a where the world is headed, so it’s really exciting that Hollywood is really up to speed with the rest of the world.”

For more information about the ban, please refer to Code of Ordinances 97.05.    You may also contact the City of Hollywood Code Compliance Division at 954.921.3061.

Learn more about using reusables as an option in your establishment. Click here to view the Reusable Foodware Service Guide, published by the Clean Water Fund.

To learn more on how you can help, visit www.broward.surfrider.org and/or www.freeourseas.org

For info on seismic drilling, go to Stopthedrill.org