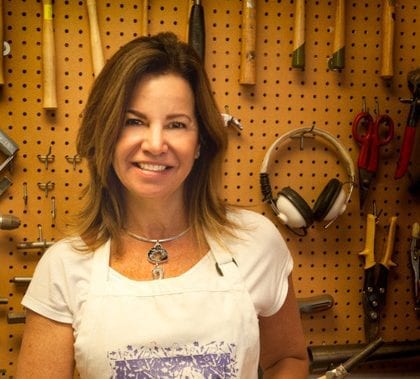 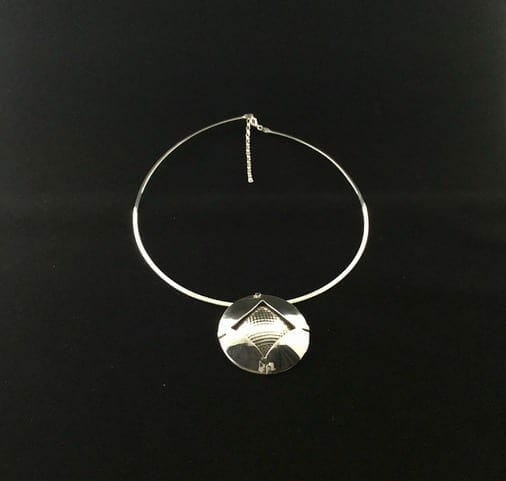 Tucked away at the ArtsPark pavilion at 1 N. Young Circle between the Hollywood Hot Glass glass-blowing studio and the ever-changing gallery, behind closed doors, there are artists at work like Keebler elves hidden in the trees.

And behind the first door is Ana Esther Soued, known as Esther, a super talented and award-winning metalsmith and jewelry designer.

Since the opening of the park, she’s been working away in her metal studio, creating beautiful pieces of wearable art in precious and base metals, giving group classes and private lessons to budding artists, preparing exhibitions for galleries and museums around the country, and selling her one-of-a-kind designs to locals and visitors alike.

How did this Venezuelan-born artist become the Head Jeweler for the City of Hollywood?”

“It was about ten years ago,” she recalled.  “I was invited to a dinner party, and there was a woman there who was running for mayor. We got to talking and she told me that they were fixing up the park, and that there were three studios for art, that one was for metals, and that I would be perfect for it…and that Monday was the last day for submissions!

So on the Monday, I went, from my studio in North Miami Beach, expecting nothing, submitted my portfolio, and left. Then one day they called me for an interview, I came before a whole board, about twelve people, some of them knew a lot, they asked a lot of technical questions, they told me they’d let me know. Three months later I got the call that I got it, and I have been here since then.”

Soued always knew she was an artist, but studied business administration.

“In Venezuela, the only way to study art is in a government school, and they’re always on strike,” she laughed.  “And even 30 years ago, when you tell your parents that you want to study art, they think it’s an excuse to not work!  So I figured I’d study business so whatever I do, I would be able to manage my money when I became successful.

“Then,” she continued,”  I found an artist and jewelry classes and fell in love from day one.  I got a saw and started cutting the metal and I stayed and I have been studying ever since.”

Soued moved to the United States 23 years ago.  First living in Charlotte North Carolina, she became a member of the N.C. Association of Goldsmiths and began taking classes with all the big people in metalsmithing in the U.S., having small gallery shows and eventually selling and then teaching.  She moved to Miami in 2000 and switched to the Florida associations.

“Being a member gives you info on all the events and classes in the area.  I keep studying today. There is always something to learn. And that can make your work more interesting.

“I sell pieces to little boutiques. Everything is a process, as you start growing as an artist. I got my MFA in 2010 in visual arts.  Now I work for clients and keep exhibiting in galleries all over the U.S.

Because her studio is in the ArtsPark, she works for the city. She pays rent to the city from what she makes on sales, classes, and events.  She keeps displays in the gallery hall and is available during events and by appointment, and sells her jewelry both from the studio and by special order.

Soued’s classes can also be created to order.

The basic series of group classes she offers at the ArtsPark takes place from 10 am to 1 pm on Wednesdays.  She teaches sawing, piercing, sanding and finishing, and later on, goes on to soldering, design, and other advanced techniques.  Within about four sessions, students will create a metal piece “like in a store” from beginning to end, she said.

“A student needs several classes to really learn, at least four to five months, in order to go home and work alone and understand the basic metalwork techniques,” Soued explained.   “With two to three techniques, you can do marvelous things.”

However, she stresses, finished pieces, like beautiful beaded necklaces and lariats, can be completed in one class, perfect for corporate classes and birthday parties.

Soued loves Hollywood, of course, and working for the City, as its Official Jeweler.  But she said that her favorite thing remains just being in the studio.

“Time passes so quickly, sometimes I end the day and my lunch is still sitting there,” she marvels.  “I put on my music, I get connected with my tools and my metal, I start manipulating…for me it’s fascinating.