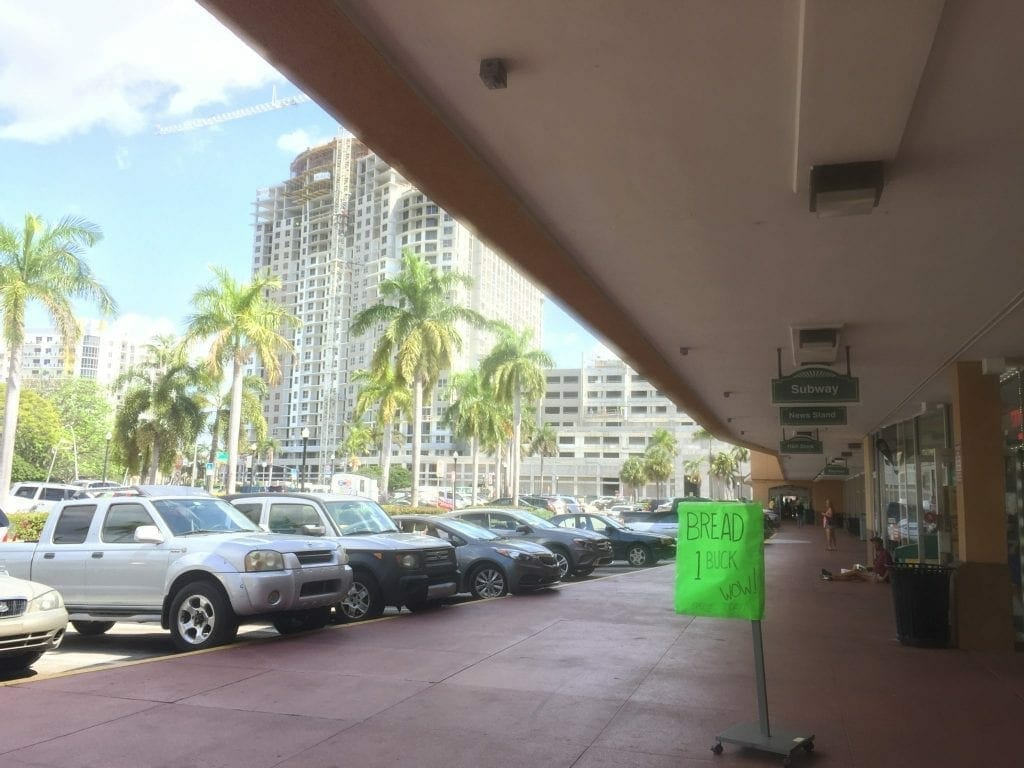 Love and Hate, two pretty strong words, are usually the only two adjectives you hear when people are discussing the “old” Publix, now sitting idle on the East side of the Young Circle ArtsPark as the traffic flows past it or around it on the way to and from the beach.

This “grand dame” of the Publix chain was one of their oldest stores.

Built on the prominent East side of Young Circle sometime around 1963, it stood unchanged until its unceremonious closing this year.  The store never received an expansion or major remodel, probably due to the very small footprint of the property, compared to most grocery stores today.

When it was constructed,  there were far fewer people in Hollywood,  and certainly fewer cars. With virtually no way to expand the footprint of the property, bordered on all sides by roadway, it remained stuck in time — along with some of its customers.

It’s an odd piece of real estate, as it blocks traffic from easily getting from Hollywood Lakes and the Beach to downtown.  You literally must drive around the property to continue East or West on Hollywood Blvd.

To understand the reason for this oddity,  you must look at the history of the site.

In the ‘20s,  Joseph Young wanted to welcome people to his new city, so he constructed the glamorous Hollywood Hotel on this site, using the same exact footprint that still exists for the shopping center that stands today. At that time there was no Federal Highway. The only North-South route was the Dixie Highway. It was 1923.

Back then, most visitors would arrive by train, disembarking at the old Florida East Coast railroad station on Dixie Highway.   This beautiful grand hotel facing west was the first thing they would see as they made their way East on Hollywood Boulevard.

Smart for the time but very frustrating for today’s drivers.

The Hollywood Hotel was constructed before the “Historic” Hollywood Beach Resort on the beach.  When the beach hotel opened, the name was changed to the Park View Hotel to avoid confusion. It was later renamed again, to The Town House Hotel.  (Not to be confused with the old apartment building later erected and imploded on the future site of the Circ Hotel, 1/4 way around the circle to the North.)

I can honestly say,  being a lifelong resident of this city, I have never completed a trip to this store without at least some form of entertainment, and I was never disappointed, ever.  This site could be the origin of the term we all know and love, “HollyWeird.”

As Hollywood idled for so many years resisting change, so too did our signature downtown grocery store, trapped on all sides with no room to grow.

Some residents just loved this oddball shopping experience, while others loathed it and would even warn their guests, coming for a visit or a party: “Whatever you do don’t stop at the Circle Publix, get it before you get here,” they would say.

Failure to warn a newbie could result in the “OMG have you been to that store?” comment upon the guest’s arrival.

Publix grocery stores are funny things to Floridians — we take possession of them. You hear people say all the time: My Publix has this, or, I just love My Publix, I know where everything is, or My new Publix just opened.

So when our oldest, most storied neighborhood Publix closed, many people were waxing poetic about just how much they will miss their old store and the cast of characters that entertained them and made their shopping a real out-of-this-world experience — where Shopping really was “A Pleasure”.

But the times they are a-changin’.  Our brand new state-of-the-art Publix, right across from the old one, in the new high-rise Circ Hotel building, has opened. The transition took less than 24 hours!  One night the Circle Publix closed and the next day the new one opened.

I was in attendance and I can tell you it was truly exciting to be the first through the doors of My New Publix.

This was my second Publix grand opening. I was also in attendance at the opening of the new Sheridan Publix which replaced a not so old Publix on Sheridan in Dania.

But this Publix ribbon-cutting was far more personal for me, and many residents of Hollywood, as it represented not only the end of our old charming, antiquated Publix and the birth of a new modern state-of-the-art shopping experience but also a reflection of bigger changes on the horizon for our stately downtown Hollywood.

The odd parcel of real estate that our “Old Publix”  inhabited for so many years is being eyed by developers for another new project.  Plans call for demolition and redevelopment, with a possible opening of Hollywood Boulevard, right through to the Circle.

This would be a welcome change to a confusing intersection which appears to have outgrown its meaning and usefulness in today’s thriving downtown Hollywood.