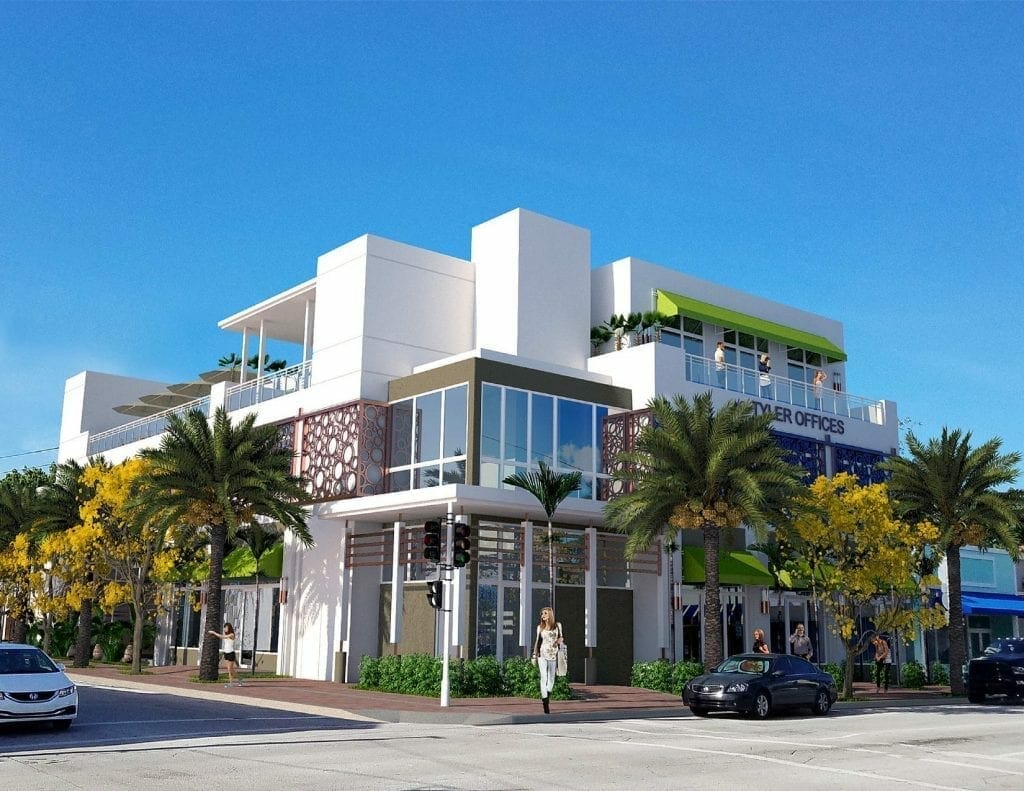 The City of Hollywood has announced the approval of a plan for a mixed-use commercial development at the corner of Tyler Street and 20th Avenue, the first new building on the block in many years.

The three-story, Class A building, at 1955 Tyler Street, will feature approximately 16,000 square feet on a relatively small (=/- 73 x 128 feet) downtown triple corner lot.  Designed by Hollywood architects Joseph Kaller & Associates, plans include space for 2,119 square feet of retail space on the ground level,  35 executive offices on the second floor and 3,687 square feet of professional office space with bistro-style rooftop dining on the third.

The new building will be equipped with Smart Building Technology and Green Building Features. It will meet the highest hurricane and flood-proofing standards, have a 100kw emergency generator, be fully ADA-accessible and have bike racks and electric vehicle charging stations.

“To me,” said Kaller, “it’s going to be an edgy, well-articulated building that will jump-start the rejuvenation of the street. Hopefully, this will propel other downtown landowners to start thinking about upgrading or redeveloping their existing structures to reflect the vitality of the new Hollywood.”

The building is the first from-the-ground-up development of Ezekiel Development LLC, headed up by Singapore native and Hollywood resident Michael Ezekiel.  Construction financing will be provided by Continental Bank, and the General Contractor selected for the project is Treo Construction.

“We’re excited to be a part of the renaissance of downtown Hollywood, and delighted that the building was so beautifully designed,” said Ezekiel, a CPA by profession.  “We will continue to work with Joe Kaller and  Jill Weisberg of the downtown CRA, (who manages the Downtown Hollywood Mural Project as well as other local arts initiatives,) to finalize the exterior decorative design so that it epitomizes the rebirth of the area.  Ours is a unique building and we want to reflect that in every detail, as it’s the start of the redevelopment of Tyler Street.”

“I share their excitement,” noted Jorge Camejo, Executive Director of the Hollywood CRA.   “I think this building will make a significant statement on Tyler Street both architecturally and functionally.  It’s an elegant design that addresses form and function working very well together.”

Occupancy in the as-yet-unnamed building is expected to begin in the Fall of 2019.