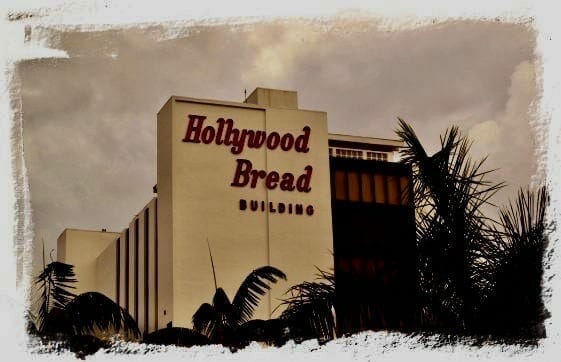 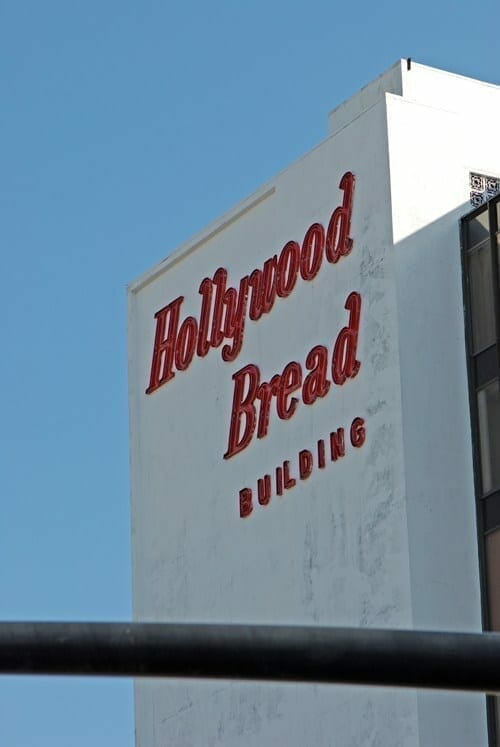 I realized that we must have reached the point of historical amnesia when a friend recently asked me why that building was called the Hollywood Bread Building anyway.

I guess I should have seen it coming.   Hollywood Bread has been out of business for years now.  That’s right folks, there was a real bread called Hollywood diet bread. And now with development coming to this site, I thought it was time to learn the story of the building, before the big landmark “Hollywood Bread Building” sign came down once and for all.

But the more I investigated, the more I became aware that the real story was not the building but the company and its glamorous founder and president, Mrs. Eleanor Hansberry, who presided over the bread empire until her death in 1978.

Mrs. Hansberry was a woman who was, as they say, way ahead of her time. Her success in business was unmatched by women of the time; she boasted once that she’s had hundreds of men working for her.  Asked how she handled telling men what to do, she replied: “I have one head man,  and he tells the other men what to do.  But they all know where the orders come from!”

Way ahead of her time.

Born Eleanor Roth in Canton Ohio sometime in the 1920s, she never divulged her true age.

She was once quoted as saying that any woman who tells you her age would tell you anything.

And again, way ahead of her time. 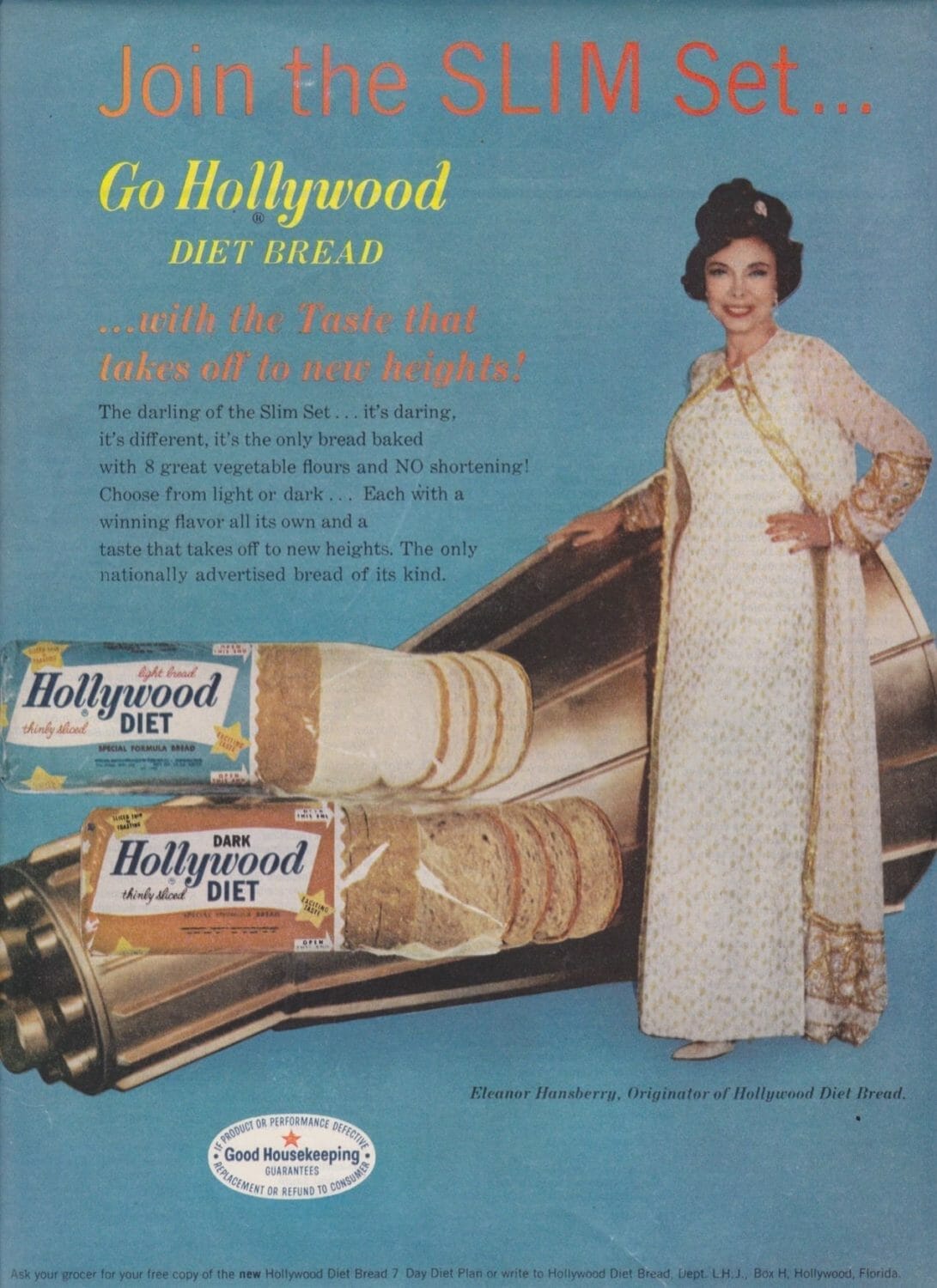 In her early 20s, struggling to lose weight and unwilling to give up her breakfast toast, she came up with the idea for a bread that would be low in calories and healthy.

After divorcing her third husband, she kept herself occupied developing a special formula for this new kind of healthy, tasty,  diet bread. Eventually, she approached a company called Elam Health Foods in Chicago with her recipe.  Her formula contained eight vegetables:  parsley, carrots, cabbage, cauliflower, artichoke, lettuce and pumpkin and — get this —  a smidge of seaweed. I didn’t want to but I have to say it again. This woman was way ahead of her time.

The final product had a good flavor and fewer calories than a traditional loaf and the slices were thinner to shave more calories. 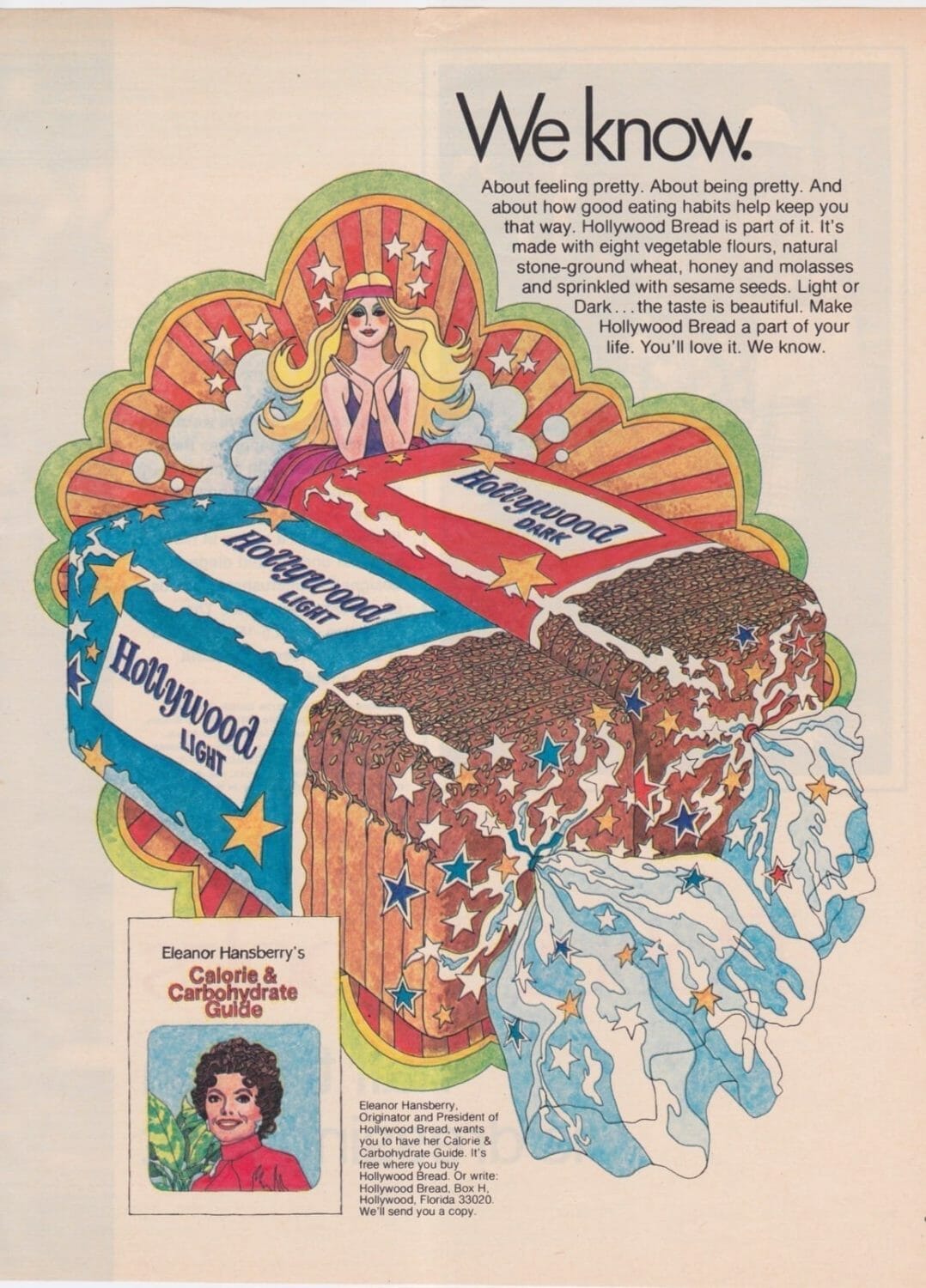 Around this time she met, let me see I guess it would be her fourth husband, who laughed at her idea and wouldn’t put a dime to help in her quest.  But he knew an investor who would.

Hope Hipwell gave Eleanor $1000 in cash in return for 49 percent of the company.

Hansberry hit the pavement and headed to Hollywood, California, to enlist stars to sell her bread. And that, not Hollywood, Florida, is where the name originated for the bread she made famous. Elizabeth Taylor, Joan Crawford, Grace Kelly, Joan Fontaine, and Judy Garland all had their pictures in the stars that adorned the wrapper of the bread.

Eleanor Hansberry was a one-wonder-woman show on a mission. Her bread company never had a bakery, at least not while she was alive.  Instead she sold franchises of her bread recipe to bakeries across the country. Hollywood Bread would ship the mix all over the country to different bakeries, who would bake it and then distribute it to local grocers, while she controlled a huge marketing program. She had a hell of a time as a woman in the ‘40s,  walking into these bakeries to convince them to bake her bread when they had their own brands.

But Hansberry was a hell of a woman.  So she started another company, the National Bakers Services, Inc. and became its president and chairman, errr, chairwoman.

Sometime around the late ‘50s or early ‘60s,  Mrs. Hansberry decided to relocate herself and her company to one of her favorite vacation spots: Hollywood, Florida.  After relocating to Florida, the company stopped using the movie stars but kept the stars on the wrappers.

She had the building we now know as the Hollywood Bread Building built in 1969,  about the same time the neighboring Home Tower was being constructed. The building is a classic mid-century modern structure with a huge cantilevered roof and a well-designed parking garage under the structure. The sign used to be illuminated and could be seen for miles, as there were no other high rises around it at that time.

Lucky for us the latest proposal from the developer is to rehab this building into exclusive loft-style apartments, which will be incorporated into the larger development of this parcel.  But unfortunately, as of now, we know of no intentions to incorporate the name or the landmark sign into the future development. 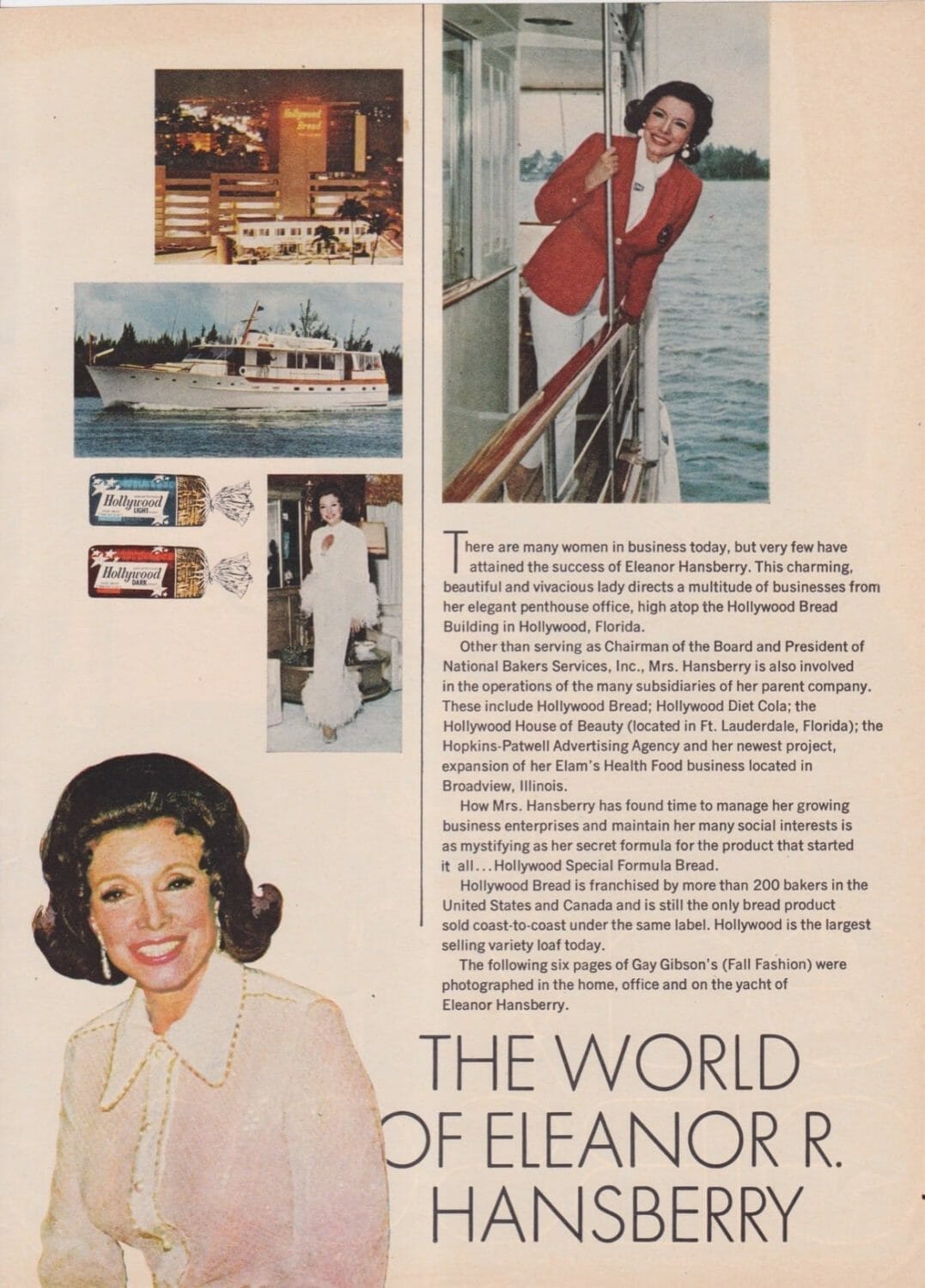 But back to Eleanor.

Eleanor made her home at 900 South Northlake Drive. This prime piece of real estate is one of the best in the Lakes, with spectacular views of Northlake and the Beach barrier island, and water on two sides.   The home, as well as her many activities in the community, were featured in depth in society pages around the region.

Many fancy parties were held here, including one for her Northlake neighbor Mr. Bert Parks of Miss America fame.

“There she is,  Miss America,” it was said that he had to sing for his dinner that night.

During the first 18 years she lived in her Hollywood home, she put on 6 major additions.

But it wasn’t all fun and games at 900 South Northlake Drive.

They tied up Mrs. Hansberry with her designer drapery cords and her scarves, cut the phone lines and left her there.  The story is that even in tragedy, the glamorous Hansberry maintained her signature flair. After managing to free herself, she fled to the home of her neighbor Thomas Wohl, then the owner and president of Home Federal Savings, who called the police.

While here in Hollywood she opened The Hollywood House of Beauty on Galt Ocean Mile.

It was an exclusive salon offering facials and hair styling, and she imported the best stylists and facial specialists in the country. In addition to her salon, she also owned a Hollywood diet cola company, the Elam Health Food company,  where she had tested her original bread recipe, and the Hopkins-Patwell advertising agency. She held extravagant parties in her home and on her yachts, and appeared in magazines and television shows — she was a contestant on What’s My Line with Panelists Arlene Francis, Dorothy Kilgallen, Bennett Cerf,  Buddy Hackett, surprise guest Joey Bishop and mystery guests Lucille Ball and Bob Hope.  By any measure, Mrs. Hansberry was a huge success.

Eleanor Hansberry passed away in 1978 and her funeral was held at the Little Flower Catholic Church in the city she loved so much.  A few years later Hollywood Bread went out of business, along with her other businesses. Her home was demolished many years ago,  and a large mansion built in 2000 stands there today.

The Hollywood Bread Building is the last remainder we have of this incredibly strong, independent, smart, businesswoman. In an era of male-dominated society and business, Eleanor Hansberry was a woman who was definitely “way ahead of her time”. 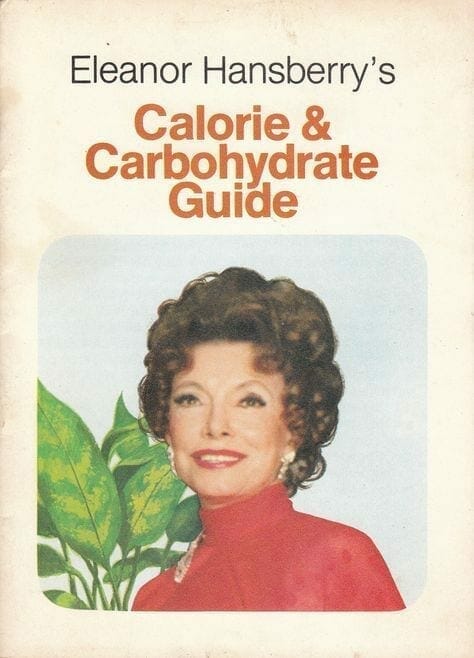 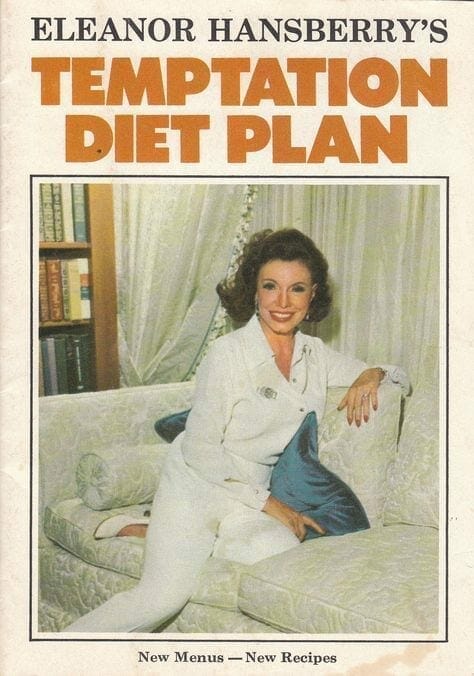