“I live for drama,” said Erica Notari, winner of a Lifetime Achievement Award for 2018 from the Exceptional Theater Company (ETC).  Erica, herself a special needs actress, always goes the extra mile to support her fellow actors.

And she’s not the only ETC actor that feels that way.  All the actors at ETC work tirelessly together to put on shows guaranteed to entertain and delight their audiences, and they have a great time doing it.

Actress Christine Ayers also is always out and about, leading the way for people with all kinds of disabilities to be a part of mainstream Florida life as much as they can.  She was a model in the FUNclusion fashion show last year, and also met her “Prince”,  A.J. Paoli, through ETC.   The couple shares so much love that Christine, who is on the waiting list for a heart transplant, was recently told by her doctors that her condition was improving, a situation they could attribute only to love and happiness.

The Exceptional Theater Company is aa 501(c)(3) non-profit theatre school serving over 200 Broward adults with special needs.   The run a series of weekly acting and music classes in eight Broward locations, focusing on building verbal and movement skills, self-confidence and socialization while stimulating free thinking.   Each spring for the past five years, they have worked with Leadership Hollywood to produce the Hollywood Stars event at the Hollywood Central Performing Arts Center.   The actors and volunteers usually pick the themes and write the scripts for their annual performances.

The second Annual ETC Heroes Gala, which will recognize as Heroes some of South Florida’s contributors to the special needs community, as well as the Heroes among its own actors, will take place on October 27  at the Renaissance Fort Lauderdale Hotel.  Tickets and sponsorship opportunities are still available.

For more information on the Heroes Gala, or to learn more about ETC, please email Daniela Roeder at [email protected], call 954 699 4096 or visit www.exceptionaltheatercompany.org. 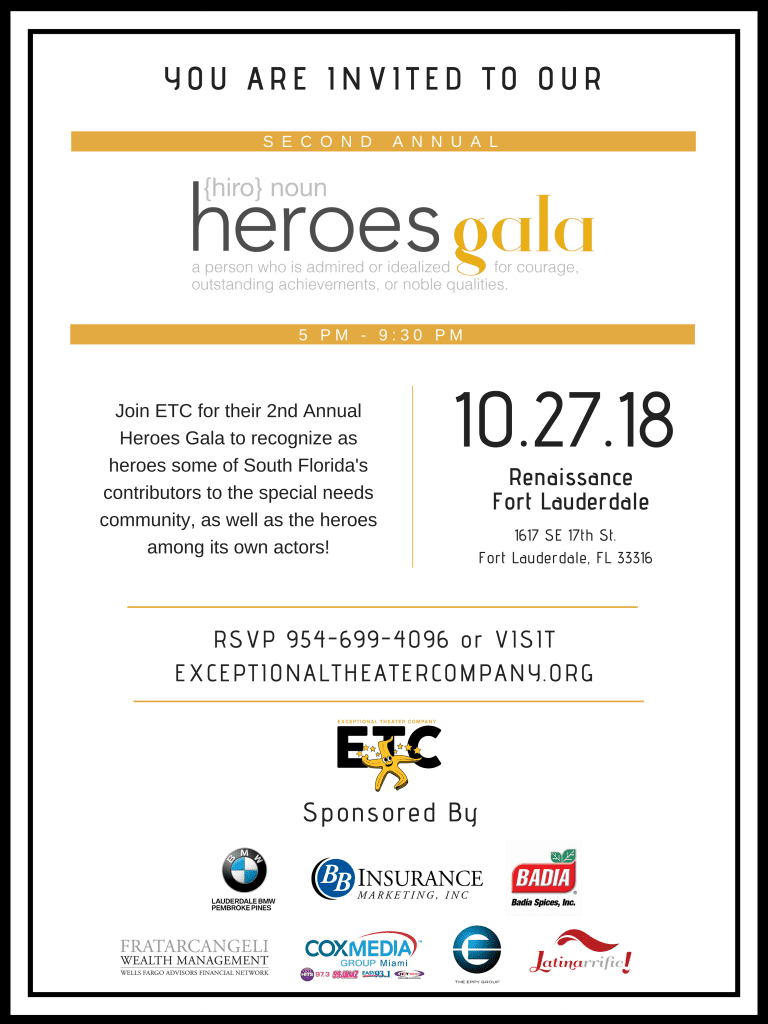