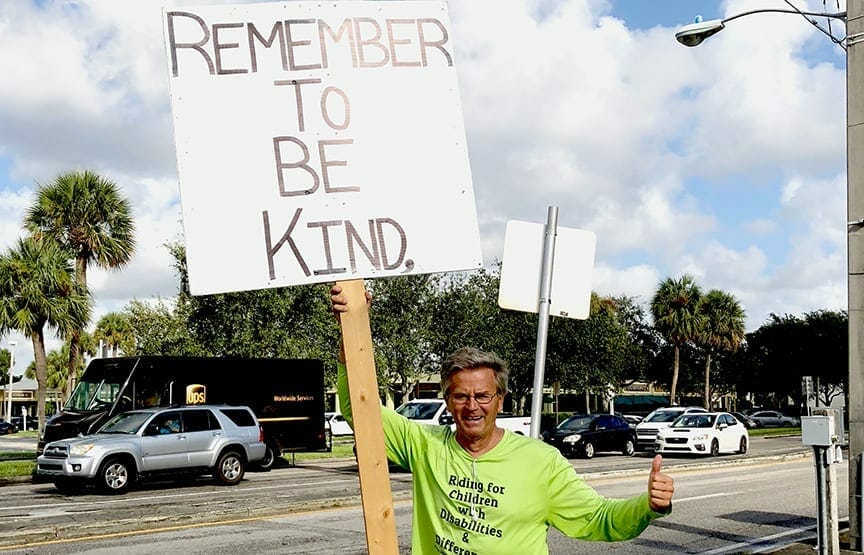 You’re driving along Sheridan Street and you see something that catches your eye.  A man, holding a large sign on a pole on the corner. In an adjacent parking lot is his pastel-blue school bus, covered in slogans and decorations. He’s facing the busy intersection at TY Park and Park Sheridan Plaza. His sign, in simple block letters, reads: “Remember to be kind.”

These days, we’re reminded to do all manner of things – register to vote!  Make that dentist appointment! See something, say something! Cancel the Blue Apron subscription! – that a reminder for something as basic as being kind to one another feels like it doesn’t quite belong on that same level.  Kind is something you ARE, not something you DO, right?

The man holding the sign, Bob Votruba, has spent the last eleven years on a self-imposed mission to teach us that yes, kindness is a choice, and it’s one you can make every single day. He’s been crossing the country on that bus (a donation from the Blue Bird bus manufacturer, replacing an earlier, less fancy bus) hosting talks, events, charity rides, and yes, simply standing with a sign on street corners around the country, reminding us to be good to each other.

On October 12, he made Hollywood kinder if only for a couple of days. It wasn’t his first visit to Hollywood, and with friends in the area, it won’t be his last.

He calls his mission “One Million Acts of Kindness,” and the goal is to persuade people to perform one million acts of kindness in one’s lifetime. 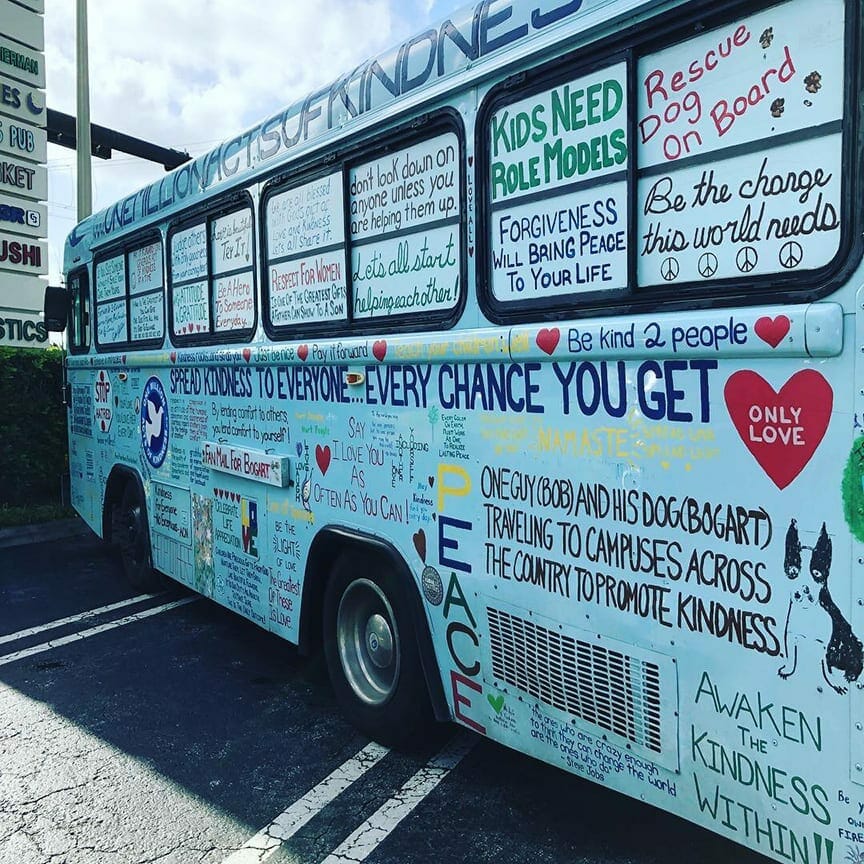 We caught up with Bob and asked him a few questions about himself and his quest. (We’ve slightly edited Bob’s answers for clarity.)

HG: Where did you grow up? Was kindness instilled on you by your parents from an early age?

BV: I grew up in Cleveland, Ohio for 53 years until I left on the One Million Acts Of Kindness bus tour.

Both my parents were both very caring and loving. Both of them did a lot of volunteer work in Northeast Ohio.

HG: What was your life like before the mission?

BV: Family was very important to me. Not only having eight sisters in my life but raising three children as a father. My children are in their late 20s and early 30s and they are big supporters of the One Million Acts Of Kindness mission.

BV: After traveling extensively for the last nine years throughout all 48 contiguous states, I now am able to visit Cleveland, Ohio for three months in the summer [and] also be in Southwest Florida for six months during the winter months. Along with the Kindness bus when I travel, I consider all three places my home.

HG: Was there some event in your life that made kindness your life’s mission?

BV: On April 16th, 2007, There was a shooting at Virginia Tech where 32 individuals lost their lives. I went down to the campus three days after the shooting and was there for four days. I was so deeply moved by the conversations I had over the course of that time, I decided that I would like to travel the country to convince people to have kindness as a goal in their lives.

HG: You travel with your dog – does that make it easier or harder?

BV: Bogart, an 11-year-old Boston terrier, is such a blessing to have along my travels. He is such a big part of this mission allowing us to connect with dog lovers across the nation.

HG: How are you funded?

BV: The One Million Acts Of Kindness mission is self-funded.  There are times, however, when we need financial help because of a bus breakdown or another unexpected expenditure.

BV: Every single day is so different. One thing for certain is I am very busy every day, usually from sunup to sundown. I do a lot of programs, I talk to a lot of people, I ride on my kindness bicycle, and I really am enjoying my new sign that I hold which reads: remember to be kind you may just save someone’s life.

HG: What’s the most impressive act of kindness that sticks out in your mind?

BV: There are so many unbelievable acts of kindness that I’ve witnessed since I started this mission, the one thing that really impresses me is when children undertake a mission to help others. I’ve seen this so many times across our country.

HG: How far along are you in your goal of one million?  Do you keep track?

BV: I will never reach One Million Acts Of Kindness in my lifetime: I started much too late. It is my wish that individuals who are college-age or younger will embrace kindness as a goal in their lifetime. They will have a chance of performing One Million Acts Of Kindness in their lifetime. My other wish [is that] those who are older than, like me, have a mindset of doing as many acts of kindness per day as they possibly can.

HG: What’s the easiest way for someone to start being kind?

BV: From either talking with me or from reading an article such as this they use it as a starting line to realize how kind they can be two others all day every day for the rest of their lives.

BV: My overriding messages that as an individual we all have the chance to do something very wonderful with their lives to help others.

There’s a word in Hebrew, “Chesed” that doesn’t have an exact English translation.  The closest would be “lovingkindness,” and sages considered it the most important ethical virtue.

Bob’s not a sage. He’s just a guy, on a bus, with his dog, reminding us all what we should have never forgotten: be kind.