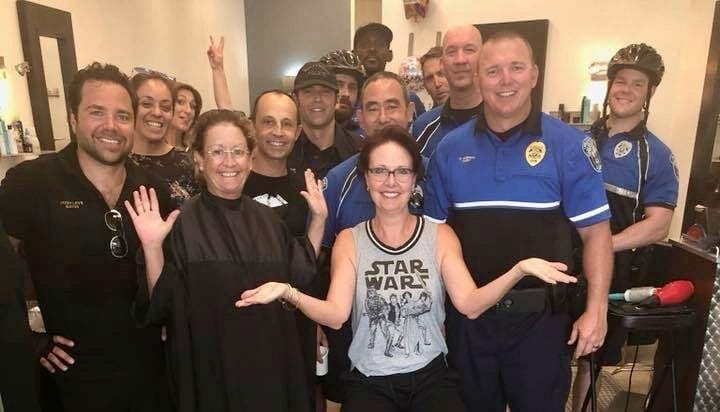 Here at the Hollywood Gazette, where we often focus on new businesses in town, we decided to look at some that have stood the test of time in our fun and funky city, and we found Hair Industry, one of the longest running business on Harrison Street.  The full-service salon recently celebrated its 16th anniversary under the stewardship of Kim Longmire and Mindy Cousineau, who met almost three decades ago while working together in a salon in Aventura.

“It was 2002 when I was told that the salon where I was working was closing,” recalled Longmire,  a Hollywood native who graduated from Beauty School at Hollywood’s  Sheridan Tech.   “I was offered a spot at another salon, in Aventura Mall, but I had really come too far as a stylist for that. When I heard that the Hair Industry was up for sale, I knew that I had to move fast.  I began doing my due diligence, and when I thought about potential partners, Mindy immediately came to mind.”

“I was living in Aventura, had two small children, and the idea of owning a business…well, I  thought that ship had sailed,” Cousineau smiled. “But, I thought about it, and I said yes.”

16 years later, the two reflect on what makes their partnership, and their business, a success.

“It’s so multi-faceted,” said Cousineau, a New Jersey native who has been living in South Florida since 1982. “Kim is the Yin to my Yang.  Our partnership has lasted because we balance each other. We butt heads of course, but we compromise. I’m more frugal, and tight with the money…”

“I don’t sweat the small stuff; I know that things will always work out,” said Longmire.

“Money is not small stuff,” Cousineau reminded her partner with a smile.  “I am more practical. I always think about ‘what if.’  Kim’s definitely more of the optimist.”

But both know that it’s not just their partnership that is the key to Hair Industry’s longevity; they wholeheartedly give that honor to their friends, family, employees (many of whom have worked with them for 10 years or more) and most importantly, their clients, of whom they say probably 75% followed them when they opened their new business.  And, they noted, more than half are still with them.

“Our clientele is our family,” Longmire said, and Cousineau agreed. “We surround ourselves with talented people and we try to be respectful.  We work hard to create a beautiful environment. A visit to our salon is like a big rap session, a communal conversation, and the customers love it and love us, and we love them.”

“We hear it again and again,” Cousineau said.  Added Longmire, “Clients tell us that they feel like they’re sitting in somebody’s living room.  They’re peaceful here. They’re not rushed. They know us and our staff, and we know them and their families.  They tell us that we’re not like other salons.  And to us, that’s the ultimate compliment.”

Their clients are, say the women, the wind beneath their wings.

“When we started,” recalled Longmire, “they were so happy for us. So supportive, so ecstatic, like parents and friends, they were what they kept us going. Without them, we might have had a much more difficult start.”

Like any quality salon, they do their part to always offer the newest techniques and trends in hair care and styling, skin and nail care and more.  They regularly attend beauty shows, have educators visit for in-salon training, and work closely with their staff to ensure clear and precise communications.  Services are constantly being added to their repertoire so that their clients are always able to keep on top of the latest colors, styles, and trends.

So what’s the “secret sauce,” that makes Hair Industry one of downtown Hollywood’s longest running salon?

“It’s our love of Hollywood,” Longmire stated adamantly.   The duo gives to local charities, and Longmire is heavily involved as a member of the Hollywood Women’s Club, the Hollywood Historical Society, Leadership Hollywood, The Lakes Civic Association, and the Downtown Task Force for the Chamber of Commerce.  She was also the co-founder of a grassroots neighborhood organization called the New Image Task Force, in existence since 2010, which works closely with the city and the police department against crime and blight in Hollywood.

“When I found out back in 2002 that there was a salon available in Downtown Hollywood, I knew it was right, I was not nervous about it, not for one second. I love it here.  I love the community, I am the forever optimist, I am the biggest cheerleader for Hollywood, always.  Yes, it has its moments, and it always has its grit, but always, it has its glory.”

“Yes,” her partner agreed.  “That’s our Hollywood.  The Grit, and the Glory.”

Hair Industry is located at 2000 Harrison Street.  For more information on, call 954 920 8220, visit www.hairindustrysalon.com or just stop in for a free consultation.