Hollywood History: The Rise and Fall and Rise Again of the Downtown Hollywood Art Scene 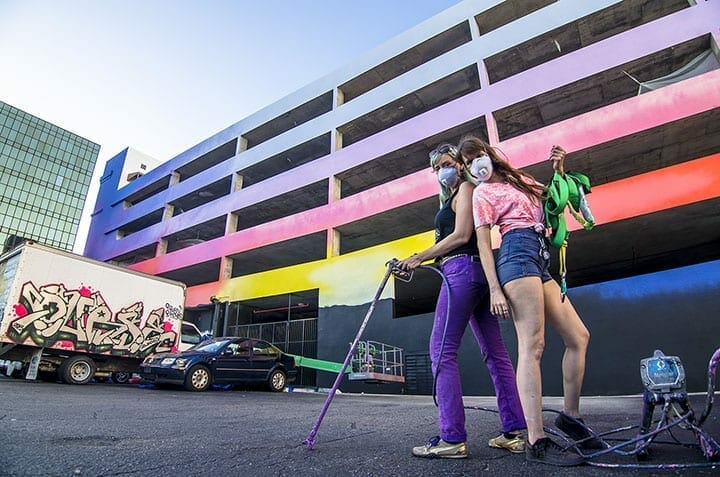 Between the opening of the ArtsPark at Young Circle, the Downtown Hollywood Mural Project and the current Intersection/Crosswalk Art Project, Hollywood has worked hard to earn its current vibe as one of South Florida’s most artsy places to be.  And a look at the history page on the website of the Art and Culture Center/Hollywood (http://artandculturecenter.org) tells of the beginnings of the art scene back when the city was in its infancy.

But little is written of the days in the middle, the ‘70s and ‘80s, when the art scene flourished in little studios throughout the downtown area, before the “slum and blight” set in, and way before the current boom made Hollywood the hot and sexy area it is today.

Long-time Hollywood resident and artist Jorge Palacios was here in the heyday, working and playing alongside such famous artists as Frank Monaco, whose work still hangs in Hollywood City Hall, the late pointillist David Maxwell, and Judy Sayfie, who still lives and works here in Hollywood.

Palacios came to Hollywood from Bogota, Colombia in 1981.  Trained as a commercial artist and architectural designer, he was working as a waiter at “the world-famous Hemmingway’s” on Dixie Highway, in the building that had been Hollywood’s first city hall and first police station. He waited tables during the evenings and painted in his studio on 20th Avenue through the nights.

“Hollywood was a small town, awesome and beautiful,” he recalled, citing retail stores, restaurants, and theatres up and down Hollywood Boulevard.

Frank Monaco lived and painted in a studio at 1924 Harrison Street, a Joseph Young designed-building, upstairs from the art school where he studied.    He exhibited at the original Art & Culture Center and often donated portions of his sales to sustain it. Later hailed as the Godfather of the arts district of Hollywood, he was known as the first artist to open a studio in the City, and the last one to leave.

Throughout the decade, the art scene was flourishing.   There was an Art Walk on the first Friday of every month, which included the Harrison Street Express Walking Tour of studios there.

“That went from ‘82 until the mid-‘90s,” said Monaco, who now lives in St. Augustine and exhibits internationally.  “At its height, the tour included 22 studios.”

Jill Weisberg, the current Artist Specialist with the City of Hollywood and Project Manager for the Downtown Hollywood Mural Project, remembers those days.  As a young teen, she used to lunch with her mother at the Coral Rose Cafe on Harrison, and look into the windows of the studios, especially those of Maxwell and Monaco, and recalled being “mesmerized.”

“It definitely fueled my passion to become an artist,” she said.  “I said to myself ‘So this is how it works. Artists have studios, and galleries, and they show and sell their work’.”  Weisberg went on to receive a masters degree in design, and now, in addition to her work for the city, she owns a gallery and painting studio, the Storefront Art Studio, on Hollywood Boulevard.

But back to the ‘80s. The early 1980s recession in the United States was having an effect on South Florida.   Hollywood was becoming a little seedy and downtown merchants were closing up shop.  Crime was up. Monaco was attacked in his Harrison Street home. People were afraid to go out after dark.  By 1983, storefront after storefront were boarded up.

Empty storefronts, though, mean lower rents, and that attracts artists, and Hollywood was still known as a haven for the creative.  Then, rumor has it, cities like Fort Lauderdale and Boca Raton began dumping their destitute at the Greyhound Station at Young Circle, arming them with pencils and sketch pads. The city, supposedly,  welcomed these “artists” and,  say the rumors, the City or the CRA was supporting them, to help sustain the image of Hollywood as the artsy place to be…much to the chagrin of the “real” artists, who were paying rent to Hollywood landlords for their studios.

“All we really needed was a place to work and exhibit our art,” Palacios explained. “‘ So Frank said, “Let’s just create a common artist area, and he opened his space on Harrison Street,”  where he painted his soon-to-be-valuable abstract works inspired by various Florida environments. Maxwell, Sayfie, and other local artists, some of whom later rose to their own fame, shared this space for exhibitions, bolstered at the beginning by the first downtown Hollywood CRA in 1979, which pledged to support the local art scene.

“Then Mara Giulianti became Mayor (in 1986) and she had a lot of pull. She worked hard to get us out of the recession,” he believes. “And little by little, the city started coming back.”

Monaco agrees that Giulianti was a strong supporter of the arts.

“I worked on her for years,” he laughed, “to get her to come up with the idea to designate downtown Hollywood as an Arts District.  Then finally, one night, she was sitting at my table in my little apartment with the then head of the CRA and she said, ‘you know, it might not be a bad idea to create an arts district.’

“Mara always did what she thought was best for the city,” he said.

The party didn’t last for long though.  The city’s resident population had started leaving, finding better deals in cities further north.  Sayfie, now a young bride, took a break from painting to raise her three young sons. And then, said Monaco, a certain developer came into town and convinced the mayor and the commissioners that what had happened in South Beach could happen in Hollywood if they would change the arts district into one for “music and entertainment”,  which he believes opened the door for more cash businesses, leading to increased money laundering and other criminal activities. Unscrupulous developers bought up the deserted commercial buildings for pennies on the dollar, and raised the rents on the studios, forcing the artists out.

“So the artists stayed for a while but the big buyers just didn’t come here and eventually,“ recalled Sayfie, “ the artists had to move out.”

Monaco moved to St. Augustine, Sayfie moved her studio to Dania, other artists moved to neighboring cities with lower rents or started working out of their homes, and the Hollywood art scene started to fizzle out.  The city and the CRA, Palacios feels, fell asleep at the wheel, and let the original Hollywood artists leave.

Hollywood had lost its edge as the place for artists, and there were no real independent exhibits for a while, until recently.  In 2013 Elizabeth Sanjuan opened Gallery 2014 on Harrison and started bringing new artists back into town.

“We started as a non-profit for young and emerging artists,” noted Sanjuan.  “We would assist them in creating an artist statement, teach them to put together a full body of work for an exhibition, and give them their first opportunity to be in a gallery setting.”  Other studios and workshops followed suit.

In 2015, the CRA introduced the Downtown Hollywood Signalization Cabinet Artwork Contest and Project, for young aspiring Hollywood artists from 7 to 17.   The program brought more art to the downtown area and ignited the passion for art in many of the city’s school children.

“These projects are some the best things they could have done,” said Palacios.

Jill Weisberg, the City’s Artist Specialist, speaks for many in Hollywood when she discusses the return of the “arts vibe” to the city.

“We’re working really hard to make Hollywood the arts hub of Broward,” she said.  “We want people to come here for all kinds of arts — the glass blowing, the music, the murals, the performing arts, everything. If you’re an artist who’s been pushed out of other cities, an established working artist, we want you here.   The more people who come here, the more we can be the hub. A bunch of like-minded, artistic, people — we think that Hollywood is a great place for them to be.”

Judy Sayfie, who is currently exhibiting 15 pieces in the lobby of the new Circ Residences at Young Circle,  shared with me a quote from David Maxwell, who, she said, was a brilliant man, in addition to a talented artist.

“I am convinced that art is magic,” said Maxwell.  “It can stun the angels. Art can move mountains, revitalize neighborhoods. Artists are leaders.

“The Japanese say that artists are the “signature” of society.  You can judge a community by how it respects its artists.”