Broward Fierce Fighters: Bitten By The Dragon and Thriving! 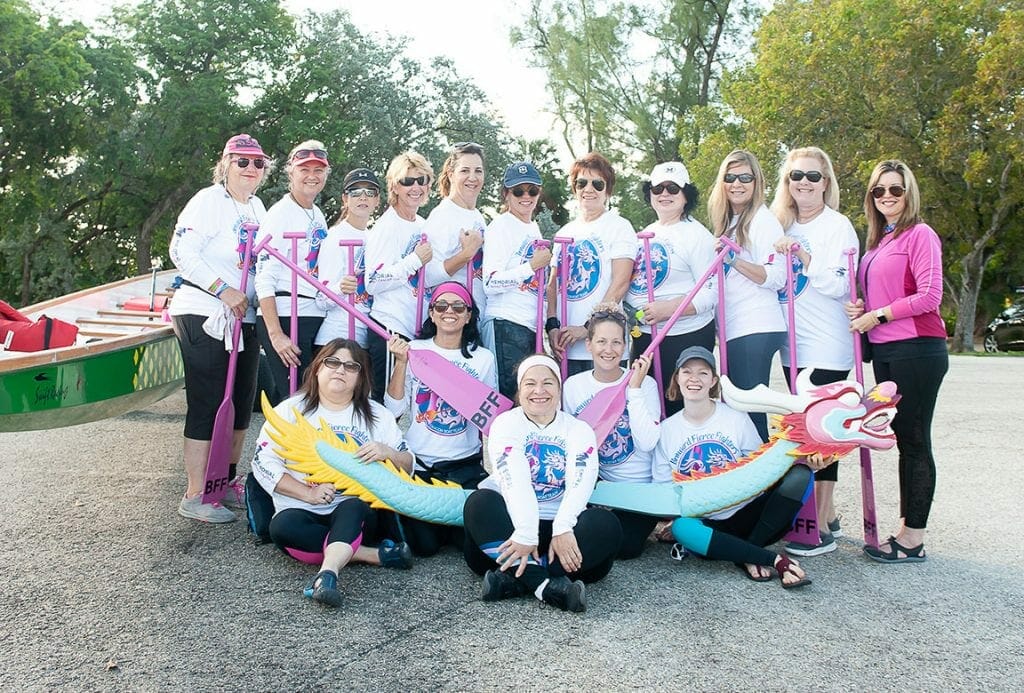 Coach Andres Ibon barks commands like a drill sergeant, and the fifteen women holding the paddles, like any good team, follow his orders as they glide their dragon boat through the waters of the Intracoastal on this beautiful fall morning.

“When we’re out on the water, they’re just athletes to me,” he says.

But they’re not just athletes, and this isn’t just any team.

These are the Broward Fierce Fighters, and they’re part of an international league of Dragon-Boating Breast Cancer Survivors who practice twice a week, all year round.

These women, and occasionally men, undeterred by the diagnoses, choose to build strength and friendships while celebrating life.

“It’s our mission, and it’s an important one,” said Mary Carrillo, captain and founder of the team. “When you go through cancer it takes a toll, emotionally and physically. We’ve been there and we’ve been through it.  But we’re survivors and we have a lot of positive energy. A lot of positive vibes. And that’s what you need when we’re going through chemo and reconstruction.”

“I was an athlete before, then I went through the whole song and dance, and I was like, OK, Now what?  Because of dragon boating, it was like ‘Yes, I’ve still got it!’”

Dragon boat racing has ancient Chinese origins and its history has been traced back more than 2000 years. Deeply rooted in rich Chinese culture, the dragon symbolizes strength, prosperity, and blessings.

Dragon boating became associated with breast cancer survivors in 1996 when Dr. Don McKenzie, a sports medicine physician at the University of British Columbia, recruited 24 breast cancer patients to participate in research to prove that this sport could be beneficial to survivors, contrary to popular belief. From this experiment came the International Breast Cancer Paddlers’ Commission (IBCPC), an organization which encourages and supports the development of recreational dragon boat paddling as a contribution to a healthy lifestyle for people diagnosed with breast cancer.

Broward Fierce Fighters (BFF) Inc., founded in October 2016, is a 501(c)(3) non-profit organization focused on breast health awareness and well-being of breast cancer survivors.  It is a spinoff of the SOS (Save Our Sisters) team in Miami, now in its 12th year.  Both teams are affiliated with the IBCPC which runs an international Dragon Boating competition for Breast Cancer Survivor (BCS) teams every four years.  In July of this year, several BFF and SOS team members traveled to Florence, Italy, to compete.

“There’s a term we use,” said McGuinness. “ When you try dragon boating once and are totally smitten from the get-go, we call it ‘Bitten by the Dragon.’  Mary invited me to try it, and I was immediately bitten.

“Yup,” Stanfield agreed.  “Aniela and I were the first on the team, and we were bitten badly!”

“Our main mission,” said McGuinness,  “is to show people that, yeah, breast cancer sucks and it’s sad but it’s not the end. In this boat, we’re strong and we’re powerful. We don’t complain, we don’t feel bad for ourselves. We don’t wallow.”

“It’s really great for the women physically, emotionally and mentally,” continued Stanfield.  “The team aspect is so rewarding, but also being on the water– it’s so beautiful, but it’s not only that. It helps women. When I went through [cancer], I had wonderful support. And I want to be that for other women.”

“The first time I went on that boat, I looked at all the other women– they were all about 20 years older than me, so I’m thinking, ‘Hey, I’m in my thirties, I’m gonna kick some butt. And these women beat me down! They just knocked the crap out of me! They never quit paddling, and they’ve had all kinds of illnesses and treatments,” shared McGuinness.

“I couldn’t use any of my excuses anymore: ‘I had cancer… I had surgery…’ And I normally would have! And that’s the great thing about that boat — once you’re in it you know you have no excuses, so you go: ‘I guess I better just shut up and paddle.’ All your excuses go out the window.”

“And for me, well, I’m lazy. You’re stuck in that darn boat, and you can’t get back.  You’ve got to finish. And you paddle in unison, so you can’t even paddle half-assed.  ‘Cause if you slack off, the rest of the team has to carry you. So it’s amazing exercise, and I felt so strong, and it’s a great group of women. It’s a great feeling, it’s incredible. With them, I’m learning to love myself so much more.”

“I’m very anti-team,” said team member Sharon Hatch.  “A new group of besties was NOT what I was looking for.   Aniela drafted me, and I joined this group to feel good and stay healthy.  I was afraid that the people would be whiney — but that is NOT this group!  This is a group of crazy, awesome women.  The initials of the name of the group — BFF — are indicative of what I found here.  This is the best group of women I know, and it’s amazing to be on the water, and when we’re out there, everything else seems to fall away.”

The Broward Fierce Fighters rent their boat from Synergy Outdoor Adventure Resources (SOAR), a 501c3 that supports US amateur athletes, especially in paddlesports.

“We would love to own a boat one day,” said McGuinness, who admitted that the organization is still learning the ins and outs of fundraising.

“We’re not the greatest at it, but we accept everyone who want to go in the boats and figure it out as we go along,” she said.  “We get sponsors — including the Memorial Breast Cancer Center — plus we raise funds from random donations and membership fees,  and we guilt our doctors, friends and families into supporting us. We never turn anyone away who wants to join the team.”

Membership in BFF is open to breast cancer survivors, their families, friends, and supporters, although family, friends and supporters cannot race with the team. Paddlers report increased fitness levels due to being physically active, and a sense of well being and empowerment, both of which are important elements to minimizing recurrence. 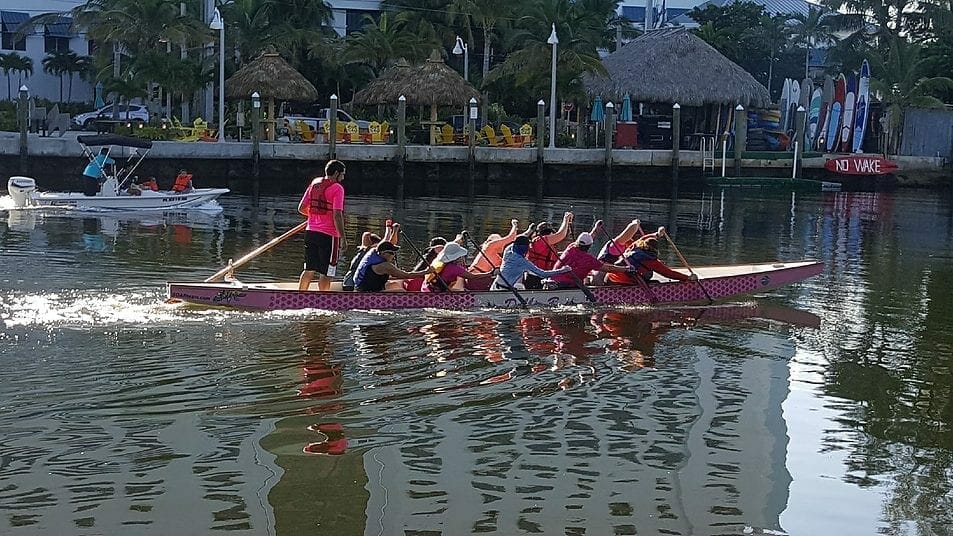 “And these people are honestly athletes. Strong, focused, kicking-butt athletes,” said McGuinness.  “To be with these women, you see that, again, there are no excuses. Breast cancer runs the gamut, all ages, races, ethnicities, careers — one women in Miami is in her 80s! — so no matter what you have to say , the woman next to you says: Hey, shut up and paddle.”

“The really nice thing,”  she concluded, “is that when you’re out on the water, yes, you’re building strength, but it’s rhythmic paddling so you’re also able to zone out and let your problems disappear. It really helps women live again.”

When she was first diagnosed, said Donna Vazquez, who joined the BFF in April, she went to a support group, and found it full of complaining, self-pitying, depressing people.  Then she found BFF.

“And after a day here with these people,” she said, “I feel great. The sky is a little bluer, and the sun shines a little brighter.”

For more information on the Broward Fierce Fighters and the Dragon Boating program, or to make a donation or sponsor an athlete, visit www.browardfiercefighters.org or contact Aniela McGuinness at 954-643-9548‬.