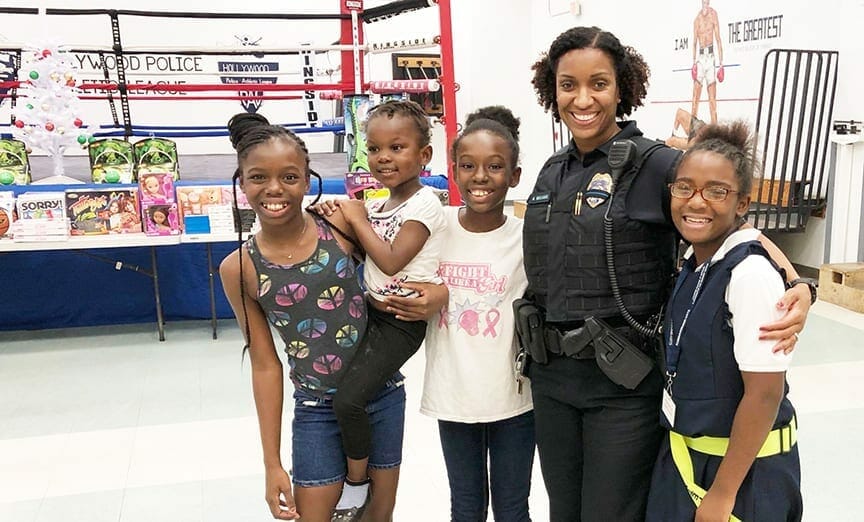 Too often, kids are raised to be afraid of the police, Sgt. Nicola Williams of the Hollywood Police Department (HPD) believes.  So, since she was transferred into the Youth Services Unit here last July, Williams has taken action to build a bridge of collaboration between the kids, the cops and the community.

In her new position, Williams is in charge of the programs that affect Hollywood’s kids in relation to the HPD.  She coordinates the annual Police Holiday Toy Drive, which collects and distributes hundreds of toys to both needy local kids and patients at Joe DiMaggio Children’s Hospital.

In addition, the former School Resource Officer (SRO) now oversees all the other SROs, the Police Explorer program and the Police Athletic League.  She has expanded the four-year-old “Shop with a Cop” event into a full-scale party.

“The kids always love these things,” she beamed, further explaining that the SROS, along with the guidance counselors, choose the kids who participate, based on need, “and some who are just awesome students.”

The early-December event allows about 25 elementary school students to gift shop, with a police escort, for their immediate families, using $100 gift cards donated by the new Hollywood Walmart on 441 and Hollywood Boulevard.  The evening is complete with SWAT Bearcat and mobile command vehicle demonstrations, a pizza party, and perhaps most exciting for the kids, a lights-flashing, sirens-blazing police escort to the event.

This year, Sgt. Williams has initiated an SRO Meal Giveaway at holiday time, and next year, she plans on adding schools into the

What these programs achieve, said Williams, is that the children see the police as just people, people who wear a uniform to work, who are often parents just like their own.

Another program that Williams oversees is the Hollywood Police Explorers.  Geared to teens and young adults aged 14-21, Explorers is a program designed for motivated and service-oriented young men and women who have an interest in the law enforcement field. Explorers receive training in all avenues of law enforcement.  The program provides an opportunity for youth to gain personal satisfaction, enhance their leadership and teamwork skills, and make a difference in their community.

While all of the programs impact the community kids, though, the one that probably impacts the most on a daily basis is PAL, the Police Athletic League.

Here in Hollywood, the PAL was started by Jerry Christiansen, a now-retired HPD Detective who was charged with keeping peace among the juvenile gangs in the city.

“My job was getting the gangs to mingle and cut down on problems,” he recounted.  “I was working out of my car, carrying around baseballs and bats. We really needed a place.

There was an available city building on North 23rd Avenue and Sheridan, he continued, “so I asked the mayor if we could have it, and she said yes.”   Then, few years later,  they really “scored” when they acquired the current PAL building, right across the street, when the previous tenant, the minor league New York Yankees, moved out.  The new building, adjacent to Boggs Field, was obtained with the help of the Law Enforcement Forfeiture Fund and former Hollywood Chief Scarberry.

“The building had been the minor league Yankee Clubhouse,” said Christiansen. “It was all painted in pinstripes.  Mickey Mantle played on this field. Bucky Dent was the last manager here.  We’re fortunate to have this facility and these fields.  The Yankees lost their contract with the city, a soccer program took over half and we were the winners — we got the building and the field.

There is a free PAL summer camp available to selected kids, made possible entirely by donations from Hollywood businesses. Officers, volunteers, professional trainers, even professional athletes, come into the clubhouse and work out with and coach and train the kids.  Between 200 and 500 kids come to PAL on a regular basis, and even more during football season.

One Hollywood kid who was particularly impacted by PAL is Patrick Agenor. 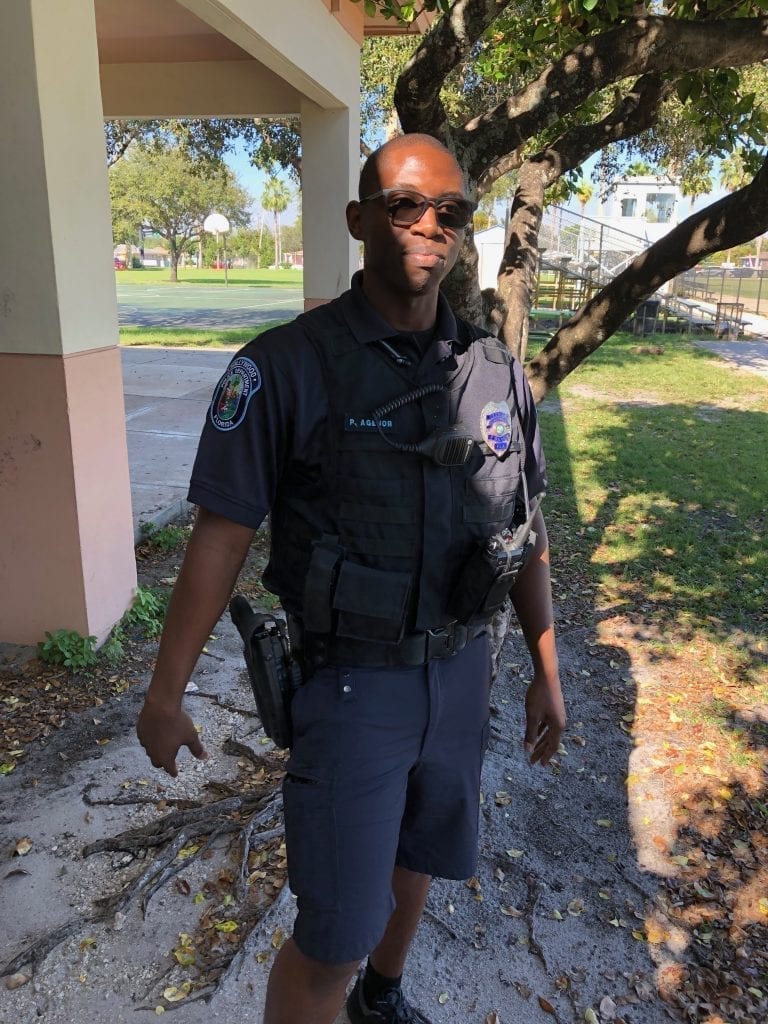 A product of the PAL program, Agenor went on to graduate high school and college and serve in the military. He then returned home, joined the Hollywood Police Force, became a School Resource Officer, and coming full circle, last year was named the director of the Hollywood PAL.

“That’s why we created this program, for people like Pat,” said Christiansen proudly. “He’s a PAL success story.  We gave him the opportunity and he took it and ran with it. This is something that’s very special to me, and I’m very happy that Patrick is here.”

What is the success rate of the Hollywood PAL?  Do they follow their kids once they age out of the program?

Said Christiansen:  “They come back and they coach and they bring their kids back.  We think we have about 20-25 percent, and we think that is fantastic.  We only have them for a little bit, a few hours. You don’t know what some of these kids are dealing with at home.  You do what you can. We’ve had about 100 kids get scholarships since we’ve been here.  It’s just a matter of caring, and they know that we care here.”

“A lot of the kids are dealing with a lot here,” said Agador, who declared that his goal as director is to get 100 kids into college or the military.  “Some of them are practically raising themselves. This is sometimes the only place they can feel safe. It’s a peaceful and safe place for them.”

“Many of the programs and community outreach the Hollywood Police Department runs focuses on our youth because they are our future leaders,” said HPD Chief Chris O’Brien.  “So it’s crucial that the Police Department does everything possible to ensure that they are on the path to success, and help them reach their full potential. Many times, officers respond to traumatic situations where kids are involved in some manner. Places like the Police Athletic League not only give kids a safe and nurturing place to be, they also allow them to build positive relationships with officers. Engaging with our youth through school, educational, sports and volunteer initiatives curbs violence, strengthens trust and creates an open dialogue.”