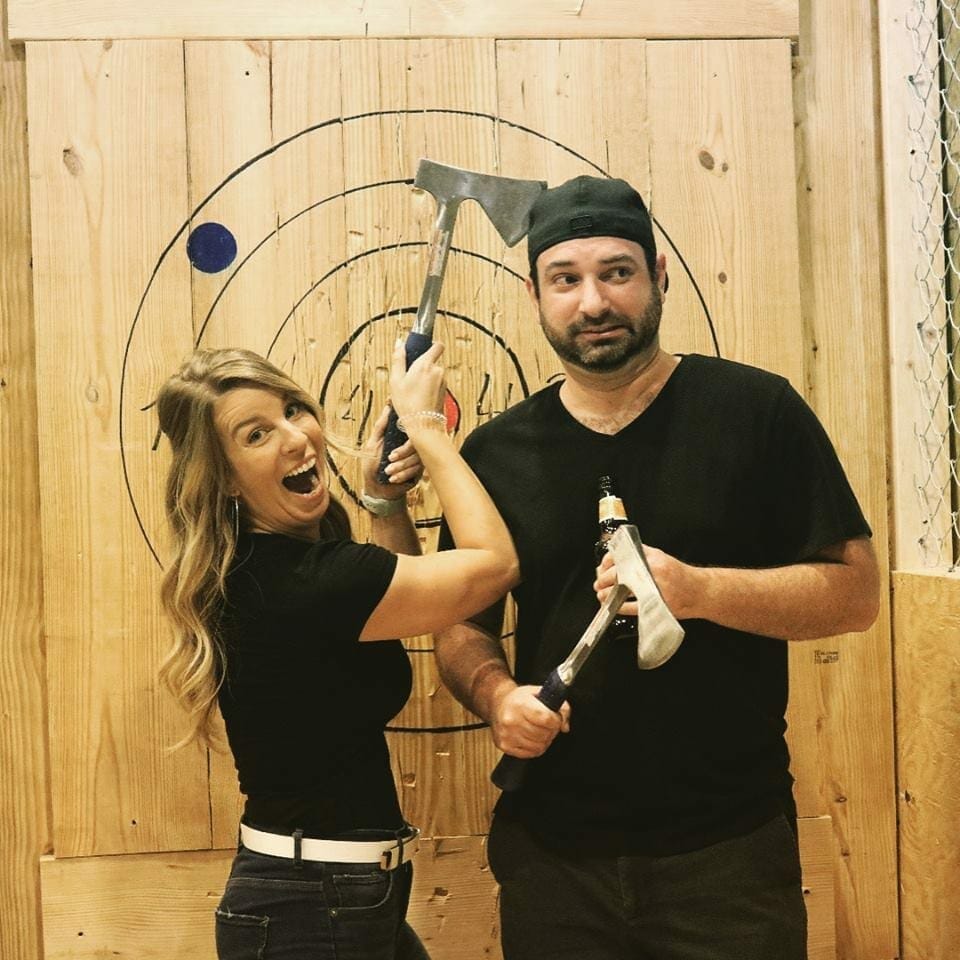 When it comes to unique and exciting entertainment options, Extreme Axe Throwing in Downtown Hollywood hits the bull’s-eye.

Formerly known mainly for its association with lumberjack competitions, axe throwing is a growing trend across the country at bars and other indoor venues, where hurling a hatchet at a target puts an exhilarating new spin on the old familiar game of darts.

And what makes the Extreme Axe experience stand out from the competition is the digital technology that’s been implemented in some of the ranges at its two South Florida locations.
Extreme Axe Throwing Hollywood opened Dec. 12 at 2046 Hollywood Blvd., next door to sister business Boxroom Escape Games, a collection of live escape rooms that opened a little over a year ago.

Business is booming at the first Extreme Axe location, which opened just a couple of months ago in Downtown Miami.

“The response is overwhelming,” said co-owner Alexander Maslinkovsky. “After airing on local and national TV and being in the local papers, requests for bookings and team-building events came in like crazy.”

When it comes to axe throwing, skill has nothing to do with a player’s size, age or gender, stressed Jennifer Nesselhaus, operations manager for Extreme Axe Hollywood and Boxroom Escape Games.

“Anyone can throw an axe, but getting it to stick on the target is a different story. The technique is key, which definitely comes with practice and knowing what works for you,” she said. “Our ‘axeperts’ will teach you the basics of throwing and work with you on tweaking your technique. We will have you landing the axe on the target by the end of your session.”

Participants can opt for tournament-style action using official WATL (World Axe Throwing League) targets or take a stab at the player-interactive games, which have been likened to playing the popular Candy Crush video game – only using an axe.

One of the oldest sports in existence, axe throwing has been increasing in popularity in recent years as both a fun indoor activity and the new league sport. Extreme Axe Throwing Hollywood is a member of the World Axe Throwing League. Players can also join the league and compete at axe-throwing venues around the world.

Extreme Axe adds a unique offering to the historic downtown arts, music and entertainment district, home to an eclectic array of restaurants and businesses, art galleries and cultural facilities, and special and recurring events.

Maslinkovsky said Extreme Axe Throwing Hollywood is the ideal complement to Boxroom Escape Games. “With the success of our escape rooms, we knew it would be a perfect fit,” he said.

The 1,700-square-foot Extreme Axe space can accommodate corporate as well as private events such as birthday parties and other special occasions. An hour and a half of axe-throwing action with a brief training session is $35.

For more information on availability and booking special events, call 754-777-0246 or visit www.extremeaxe.com.