The Beachcombers Bring Centuries of Music Making to the Hollywood Broadwalk 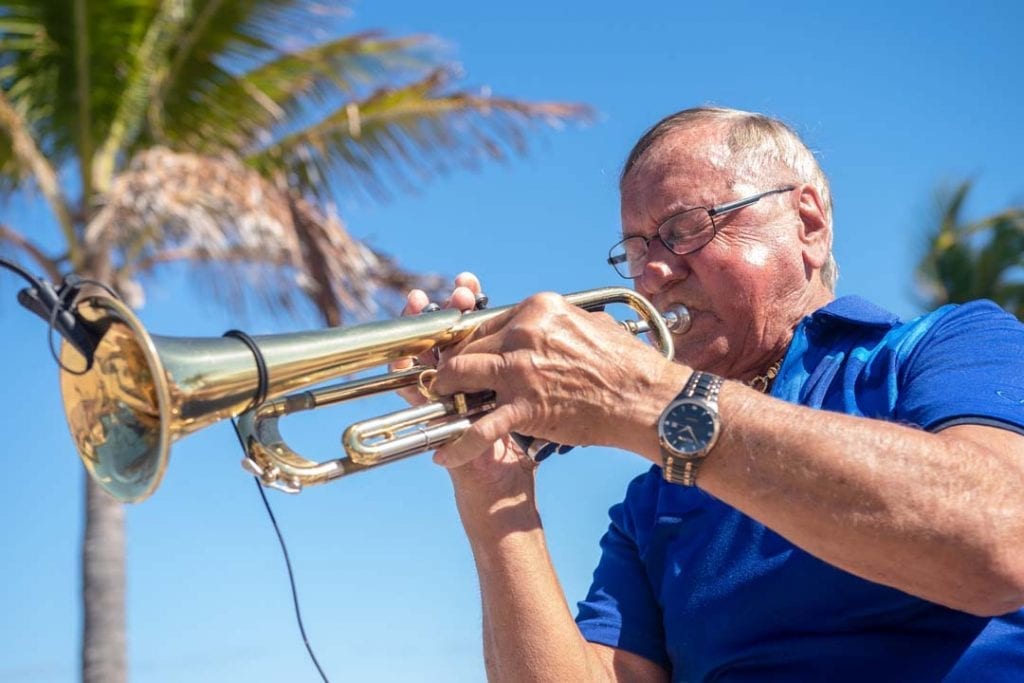 This actually makes sense, when you consider that the band has been playing for over 40 years, that this is its 4th generation, and that right now, like most any time in its history, the average age of the musicians is about 75.

And if at any time you’re lucky enough to catch one of their shows, you’ll see that these guys still rock.

“Members of the band have come and gone over the years,” said John Ricci, current lead singer and director, who joined the Beachcombers about 10 years ago.  There are about 10 players at this time, three of them for about 20 years! Throughout the band’s history, most of the players have been male; at this time, Mari Bell is the only female.  You never know which of the musicians will show up for any given performance.

The group has been making music for so long that it is almost always performed without any sheet music.  Although, Ricci noted, “some of the guys will bring some pieces on their tablets for the others to follow along.“  Apparently, even the older people here are taking advantage of today’s technology!

The band plays, as it has for 40 years, at Charnow Park, on the Broadwalk between Connecticut and Garfield Streets, right in front of the parking garage, handball courts and kids’ park.

They’ve been playing in the same spot since its inception in 1978, even before the Broadwalk and Charnow Park are what they are today. You can catch them playing their unique blend of hits from the ‘30s, ‘40s, ‘50s, ‘60s and ‘70s between the hours of 11:30 am and 3 pm on any Tuesday, Wednesday or Thursday, weather permitting.

The choice of music of the day, said Ricci, depends on who’s playing.  “It used to be a lot more big band and swing music, but now we do a lot more rock and newer music from the ‘60s and ‘70s.  The music changes with the musicians — they tend to play mostly the music grew up with,” he explained.

Ricci himself is one of the youngest members of the ensemble, at “64 and a half,” he laughed.  He joined the group about 10 years ago.

“Three of the players — Irving Hacken, Bobby Roberts, and Marvin Schoonens —  have been part of the band for 20 years,” noted Ricci.

“Marvin is 89 ¾ — well, he’ll be 90 in March.  He is a featured singer and also sometimes plays drums.  He does a great Louis Armstrong impersonation. He sings “On the Sunny Side of the Street”, “What a Wonderful World” and “Hello Dolly”.  He’ll often do eight or nine songs in a show.

“Bobby Roberts is 85.  He plays the trumpet and is also our sound technician.  He’s originally from Canada and he sings a couple of songs, both English and French.

“And our oldest band member is Irv.  He’s 97. He’s a big draw — people just love him.  He usually sings two songs and he plays guitar. His first song is usually “Ain’t She Sweet,” and he almost always dedicates his second song to his late wife.

“You’d never believe he’s 97!  He stands tall and he conducts himself like a much younger man, in every manner.”

Irv is the only one that he knows of in the current combo who played any music professionally in past, noted Ricci.

“He played in the army band in WWII, and he played with some pretty heavy cats!” he said.

All the musicians clearly enjoy everything about music and playing.  But the most fun thing, Ricci said, is always the audience.

“The people who come and listen are so diverse!” he said.  “We play under the gazebo, facing the ocean, and everyone stops, from young kids to seniors, people from all over…they listen, sing along and they dance on the Broadwalk.  I’m totally flabbergasted at how people are so into it.”

“We have a lot of fun, great camaraderie, we laugh a lot, we have a great time, and hey, we’re at the beach,” he laughed.

“But most important, the people really enjoy it,” he added.  “And we feed off of that; that’s what really gets us going.”

You can see the Beachcombers perform at Charnow Park, on the Broadwalk at 300 Connecticut Street, every Tuesday, Wednesday, and Thursday from 11:30 am to 3 pm, weather permitting.  And check out their Facebook page @The Beachcombers Hollywood Florida.